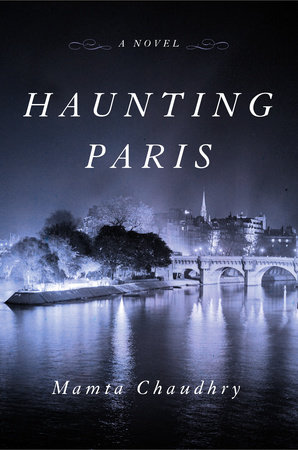 The following is from Mamta Chaudhry's novel Haunting Paris. A timeless story of love and loss takes a mysterious turn when a bereaved pianist discovers a letter among her late lover’s possessions, launching her into a decades-old search for a child who vanished in the turbulence of wartime Paris. Mamta Chaudhry’s wokr has been published in the Miami Review, The Illustrated Weekly of India, The Telegraph, The Statesman, Writer’s Digest, and The Rotarian, among others. Haunting Paris is her first novel.

They call us revenants, those who return. Restless for this world, we pass each other in mute recognition, for to be silent and solitary is our essential condition. But death doesn’t end our thirst for a human touch, a human voice calling our name.

And so I haunt these familiar quays, this familiar river. Music drifts down from Sylvie’s window and I linger until it comes to an end. The scent of lilacs on the breeze stirs dormant phantoms to life, but music is sorcery more potent; though bound to time’s measure, it exists on a plane beyond time, where there is no past and no future, there is only the present in which the dead revisit this world.

Night after night I wait until the last notes fade away and Sylvie comes to the window at last. I retreat into the shadows as one after another the beautiful mansions along quai d’Anjou spring to light, transforming those in the gloom below into a throng of ghosts. Occasionally a passing figure pauses in a pool of lamplight, to light a cigarette or glance at a watch.

Squandered time! The most enduring of regrets. In the end, a lifetime is not enough, the heart yearns for more. Who can reason with desire?

The heart has its reasons that reason cannot know.

Sylvie stirs uneasily in her sleep. Hearing a noise next door, she thinks it must be Julien working late, trying hard not to wake her though he knows she can sleep through anything. The sleep of the just, he says. Chéri, she calls out. Coco barks and she realizes of course it can’t be Julien, it must be the Americans. Though her body wakes into the present, it takes her mind a few moments longer to absorb the shock of knowing that she will never hear Julien’s voice again.

So the Americans are here finally, much later than expected. A good thing she had left the key downstairs with Ana Carvalho; the concierge is agog with curiosity about them. Sylvie herself plans to stop by in the morning, see that they’re properly settled in. Not too early, though, they must be tired after the long flight from Florida, how long did Fabienne say it was, nine hours, ten? It never seemed to bother her friend, but then Fabienne was a force of nature. She had pushed Sylvie to divide the large apartment in two, and before the paint was even dry she had located Sylvie’s first renters, a couple of professors from her college. With Fabienne nothing is moderato, everything always presto, prestissimo.

At one time Sylvie would have panicked at the prospect of dealing with strangers, but now her shyness seems the relic of a vanished self. When she was a child, her parents often acted surprised that they had produced someone with her shrinking temperament, and Fabienne said if schoolgirls had sobriquets like kings, she would be Sylvie la timide. The nickname had stuck to her through school, but when she mentioned it to Julien, he smiled and said that on the contrary, to him she was Sylvie, coeur de lion.

Sighing deeply, Sylvie turns over in bed. Seeing her unconcerned about the intruders, Coco tucks his head down into his paws. Sylvie has a harder time going back to sleep and wishes now she hadn’t thrown away the pills that brought her respite from the sleepless nights when she paced the apartment till dawn. During the nuits blanches of the past winter, she had considered visiting Fabienne in America, had even booked a ticket at her urging. But in the end she had backed out because she couldn’t bear to leave Julien behind. Not so lionhearted after all.

Yes, you are, Julien insists, encouraging even in death.

For so long she had felt as if the brightly lit banquet of life was being carried on behind closed doors, and she was entitled only to crumbs from the feast, not to a place at the table. She had felt it again at the house on rue de Bièvre, when Isabelle had seated her next to Julien. Then one day Isabelle’s husband had risen from that table because of her.

Julien’s love had turned her life into a vista of open doorways, like the grand en lade at the neighboring Hôtel de Lauzun. Sylvie could not remember what her life had been before him, nor imagine what it would be after. But she no longer has to imagine it, she lives every day with his absence.

Even the smallest thing is a painful reminder that she will never see him again. A few days ago, when she and Ana Carvalho were moving Julien’s desk from his study, they jostled open a secret drawer and a folder fell out to the floor. The concierge was beside herself with excitement about the discovery, but the shock of it hit Sylvie like a blow. She could not explain why she felt there was something fateful about it, though it looked no different from the stacks of such folders with his case notes led away at Maison Chenizot. But when she opened it, she found a checkbook from an unknown bank and a sealed envelope with the initial M. Without a word, Sylvie quietly replaced the folder in the desk.

Opening the envelope or going through the checkbook feels like a trespass, something forbidden, as if Julien has sealed o part of the life they inhabited together and left her forlorn outside.

On their side of the apartment, Will throws open the door to the terrace. Alice is already under the covers, but he stays up for a while to shake o the irritations of travel—a delayed flight, a damaged suitcase—and wonders how Alice remains unruffled by it all.

At least the apartment on Île Saint-Louis has turned out better than he expected, none of the ghastly patterned wallpaper the French seem to love. But Fabienne had assured him it was a bonne adresse, one of the best in Paris, on the very street where Baudelaire created his imaginary paradise, luxe, calme, et volupté. She had also confided her hopes that their being on the premises would draw Sylvie out of her shell; she’s become quite reclusive since Julien’s death last fall.

Will wonders how exactly she expects them to lead a stranger out of her grief. They’ll do what they can, of course, for Fabienne’s sake, if nothing else. Amazing the way she had arranged the trip for them, even scoring some coveted tickets for the bicentennial parade. His misgivings suddenly vanish as he steps out to the terrace and sees the lights of the city spread before him, brightness rising like mist off a river.

My curiosity about the Americans is too mild to make me linger in their company. It’s only by coming into Sylvie’s orbit that they have attracted my attention at all. But she is now asleep and I hasten away, lest I trouble her dreams.

As a professional interpreter of dreams, there was one I encountered repeatedly: “All of a sudden I came across an unfamiliar door in my house, and my heart was beating loudly as I pushed it open and discovered a whole new wing, a secret part of the house where I had lived all this time unknowing, unsuspecting.” Though I never had that particular dream myself, it’s what death felt like to me, an unfamiliar door in a familiar house, which I pushed open to find myself forever outside.

In this twilight world between the living and the dead, I walk till the sky lightens from black to cobalt, my favorite hour, the blue hour, when the blur of mystery still clings to things, a mystery that the sun will burn off soon enough to reveal them as plain as day.

I am tired, yet it is not fatigue, for the ailments of the body have been shrugged o like a cumbersome garment. But weariness does not belong to the body alone, and it is then, when I am past caring or thinking or feeling, that the buildings around me dissolve into ruined castles on a hill and the haze over the city is like the burning vines in winter, while far off I hear the mournful howl of wolves.

At the sound of footsteps behind me I spin around and find myself ambushed. Familiar faces transformed by hatred spit out the age-old curse: Sale juif! Then a rock strikes me sharply across the temple and blood gushes from my eye. I am shocked by the taste, warm and coppery. But when I raise my hand to touch my face, there is no blood. Yet the pain, I feel it still under the cobalt sky, where for a moment the centuries stay their ceaseless glissade. Then the sun resumes its unrelenting course as I look around to find castles and fires and wolves all fled, and I am alone again, no longer a man but a ghost in a ravishing city where all that remains of what was once my life are some spectral ruins, which I try to piece together like the vanishing fragments of a dream.

Excerpted from Haunting Paris. Used with permission of Nan A. Talese. Copyright © 2019 by Mamta Chaudhry.

Congratulations to Elizabeth Acevedo, the first writer of color to win the Carnegie medal! 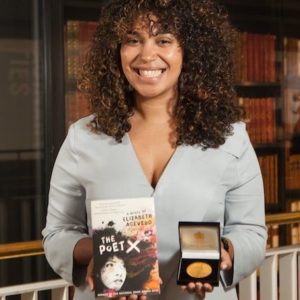 Congratulations to Elizabeth Acevedo, the first writer of color to win the Carnegie medal! Since 1936, the Carnegie medal has celebrated excellence in children's literature. Past recipients include the likes of C.S....
© LitHub
Back to top