Has the New Dark Age Begun Yet?

Peter Fleming on Why He Writes Toward Apocalypse

The morning after the Brexit referendum I walked to the supermarket in a daze of depression. My East London neighborhood was silent, as if some terrible falling sickness had lay humanity low. On approaching my destination I spotted a gang of white kids at the entrance. They were jeering at anyone who looked “foreign”: “We won, go back to your own country!” they snarled. It didn’t bode well.

The weeks passed and the gravity of the situation became apparent. A monumental mistake was filling the streets like sludge. The same sick feeling of astonishment hit me when Donald Trump was elected. Surely it can’t get any worse, I mumbled as a sea of MAGA caps flashed across the television.

Over two years later, with the Trump/Brexit horror show in full swing, I’m sorry to say I was wrong. Things can get worse, a lot worse. It feels like the global system is spiralling out of control. Climate change is nearing the point of no return. Twenty-six of the world’s richest people own as much as the poorest fifty percent. Species extinction is soaring. Artificial Intelligence is being weaponized at an alarming rate and who knew that geopolitical relations between the superpowers would get this bad.

Back in 2016 I really thought we’d “hit rock bottom.” The only way was up. A reassuring conceit for sure, but clearly groundless in light of subsequent events. It seems that no flowering summer lies ahead of us, but rather a polar night of unimaginable darkness.

I explore this theme in my book The Worst is Yet to Come. Its premise is straightforward. The present crisis (of capitalism, democracy, the natural environment, you name it) has pushed us to the brink of an even greater plunge, one that will make the Trump years look like a tiptoe through the tulips. A new dark age is upon us, fueled by Learjet billionaires and a civilization in love with its own demise. Taking to the streets with angry placards or voting for Bernie Sanders won’t make much difference by the way, but that’s another story.

Here the inevitable question arises: if I truly believe that modern society is now circling the drain and is probably unsalvageable, then why even bother writing about it? That would be like watching a killer tsunami roll in from the horizon and scribbling a few words of protest seconds before it wiped you away forever. Critical commentary in particular requires at least a modicum of hope, otherwise the whole endeavor is pointless. So what compels someone to write in the shadow of the apocalypse? Especially if they know that it’s already too late.

We can dismiss some obvious justifications from the outset. For example, it could be argued that even in the direst circumstances, the basic human impulse to create endures. There is an irrepressible spark in us that refuses to be snuffed out, with writing a key manifestation of that drive.

It’s a comforting thought, but ultimately unconvincing. I don’t think writing—or any other creative enterprise for that matter—is that natural. Often the opposite, involving a struggle against human nature. It’s the overwhelming possibility of having never been—nonexistence—that gives a text of philosophy, fiction or criticism its positive vitality, not some inexorable necessity. Literature is a minor miracle in this respect, a victory against the entropy and emptiness of the human soul.

It seems that no flowering summer lies ahead of us, but rather a polar night of unimaginable darkness.

Nor do I get any nihilistic pleasure in documenting the end times, like those crazy folk who rush to the foot of a volcano as it’s about to blow. This is a joyless task and certainly no object of fasciation.

So as the inescapable tsunami grows skyward, three reasons to write still remain, irrespective of one’s chances of survival.

The first is dignity, of knowing exactly why your existence will soon be altered for the worst, especially if there’s nothing you can do about it. The act of rejecting self-deception and confusion is a basic principle in Western ethics. It means being worthy of what happens to you. Otherwise, as German author W.G. Sebald noted, we learn from our predicament much like a rabbit learns from an experiment that’s performed upon it. In other words, knowing how to face the awful truth permits us to finally face ourselves. Better late than never.

While some kind of global collapse is almost certain, there is a second justification for continuing to write, criticism in particular. This concerns its testimonial function. Bertold Brecht’s unnerving poem “To Those Who Come After Us” helps us here, written in 1939 when escaping the Nazis: “Truly I live in dark times!” the narrator begins. He is addressing mankind far into the future, long after his fellow men have reduced the world to ash. A litany of injustices are catalogued, but the poem isn’t just a chronicle. To the reader who does not yet exist, a desperate plea for clemency and forgiveness is being made: “but when the time comes at last / and man is a helper to man / think of us / with forbearance.” We never learn whether the appeal was granted, but it was worth a try. Those who follow in our wake, they’re the ones who will inherit the dust. And they haunt us for that reason.

The third motive is a more esoteric, but ties together these thoughts about dignity and forbearance. As the French writer Maurice Blanchot pointed out in his wonderful book The Writing of the Disaster, the impending catastrophe is not necessarily something waiting out there in objective form (although it is partially that). For instance, whereas I envisage a vast cultural desert drawing near, Mike Pence speaks of a roseate future. Although I believe my narrative is more accurate, the disaster still has to be textually evoked and carefully pieced together from the signals around us. That’s not too difficult given the material at hand. But for Blanchot there’s a catch. Rather paradoxically, you can only write about this devastating future if you are already living it. Want to know what hell looks like? Take a walk down to your local supermarket and find out. By describing the imminent disaster that lies ahead, we can identify its faint outlines in the here and now, during the daily commute, walking the dog, in the office and so-on.

It is this feature that differentiates my method from millennial fatalism and hack futurism. I’m not predicting the future; only soberly recording its advance shock troops as they arrive in the most unexpected places. Could such a record help avert the catastrophe, perhaps inspire a renewed fight for freedom, liberty and hope? I’m doubtful. All indicators suggest that the unstoppable juggernaut of global capitalism has its controls set on self-destruct. And no one’s at the wheel. In seeing this, however, at least we can better prepare for what’s to come. I call this “revolutionary pessimism” because it follows the various threads of negativity that run through the texture of the present to the nth degree.

As the gang of kids outside my local supermarket rounded on another hapless victim, this time an elderly Asian man, a stranger yelled out, “you boys ought to be ashamed of yourself.” Twisting optimism into a weapon of infinite menace, the ringleader grinned and replied, “you ain’t seen nothing yet.”

Peter Fleming is a professor and author of several books, including The Worst is Yet to Come (Repeater Books), Sugar Daddy Capitalism (Polity Press) and The Death of Homo Economicus (Pluto Books). 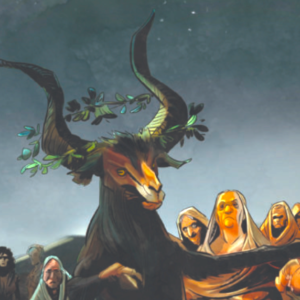 Goya has returned to comics. It is about time. It is justice served. Because, you see, not only did Francisco de Goya y Lucientes,...
© LitHub
Back to top