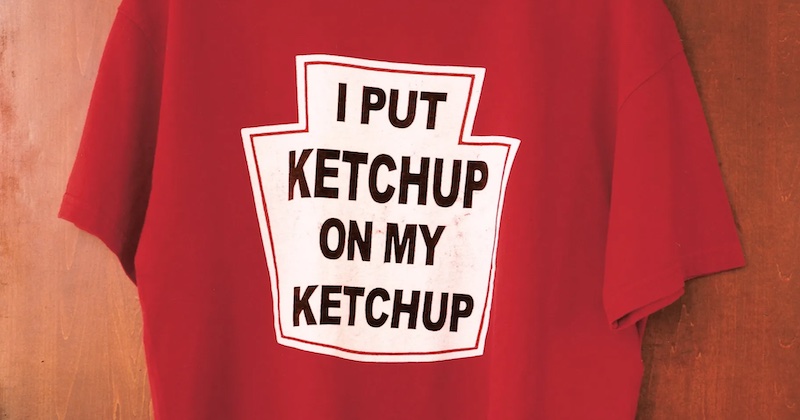 Haruki Murakami makes friends with Americans by wearing his “I Put Ketchup On My Ketchup” shirt.

Haruki Murakami is a collector: of vinyl records, T-shirts, and short stories (ha ha ha). He’s donated his collection of over 10,000 vinyl records to Waseda University, but keeps his T-shirts in cardboard boxes at his home. According to Murakami, his collection came about somewhat by accident: from buying clothes when traveling, receiving commemorative shirts every time he runs a marathon, and fans mailing him novelty T-shirts. “I’m not particularly interested in collecting things,” said Murakami in The New Yorker, “but there is a kind of running motif in my life: despite my basic indifference, objects seem to collect around me.”

But it’s not all indifference: Murakami loves his shirts, so much so that he’s releasing a book called Murakami T: The T-Shirts I Love. (Tip: if you’re trying to claim indifference about something, don’t release a book with a subtitle that says you love it.) In The New Yorker yesterday, Murakami discussed one of his favorite shirts, red with a Heinz ketchup label that says “I PUT KETCHUP ON MY KETCHUP.”  Apparently, the shirt’s a hit with Americans Murakami encounters:

This T-shirt has a straightforward message: “I PUT KETCHUP ON MY KETCHUP.” Now, that’s the statement of somebody who is seriously in love with ketchup. It kind of teases those Americans who put ketchup on everything, but I find it interesting that one of the companies that distribute these shirts is none other than Heinz. A little self-deprecatory humor going on here, but you can’t help feeling the American spirit in it, the optimistic, cheerful lack of introspection that says, “Who cares about being sophisticated! I’m gonna do what I want!”

When I walk around town in this shirt, Americans sometimes call out, “Love the shirt!” The ones who do this usually have that “I love ketchup” look about them. Sometimes I feel like coming back with a “Hey, don’t lump me in with you guys,” but usually I just give a cheerful “Yeah, pretty nice, huh? Ha-ha.” This kind of T-shirt communication does a lot to liven things up. You’d never find that happening in Europe. For one thing, Europeans by and large hardly ever eat ketchup.

A sobering lesson: even literary great Haruki Murakami can be felled by passersby failing to parse an ironic T-shirt. If only they saw his undershirt that said “Fluent in Sarcasm.”