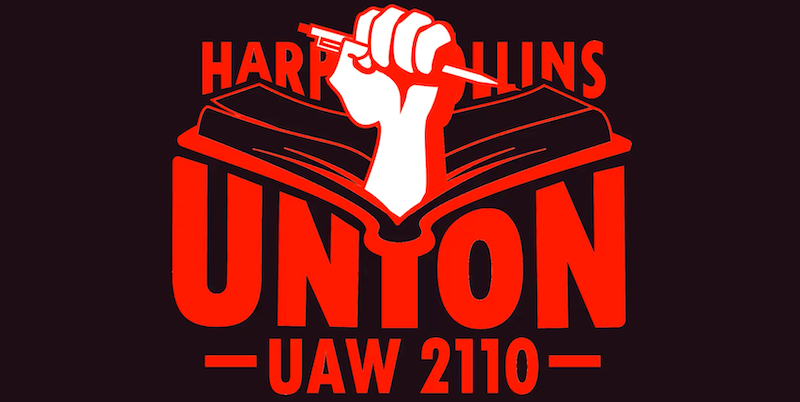 HarperCollins workers are on strike today (and collecting donations for support).

More than 200 unionized HarperCollins employees are on strike today following months of contract negotiations, which began in December 2021 and which, they say, have not yielded a fair agreement for workers.

HarperCollins, based in New York City—where the median rent recently reached $4,000 a month—offers a starting salary of $45,000, and unionized workers make an average salary of $55,000. Employees are calling for a pay increase along with more family leave benefits, improved efforts to diversify the company, and “stronger union protection,” while currently working without a contract, according to a press release.

Employees are currently holding a picket line in lower Manhattan, where others have joined them in support.

A real life publishing strike. ✊🏼to the @hcpunion ! https://t.co/Xsut1wAeiG

So yeah, If you saw a lady positively beaming on the picket line that was me. I want life to be better for the next generation of publishing workers. #hcponstrike pic.twitter.com/Ylwj2hKckk

“Our members are tired of conversations about diversity and inclusion that leave the company unaccountable,” Children’s Books associate editor Stephanie Guerdan said in a statement. “We need structural change that starts with wages, union security, and policies that actually help marginalized workers thrive in the workplace. The company needs to commit to working with us as a union on these issues on an ongoing basis.”

More than 250 employees belong to the union, Local 2110 of the Technical, Office and Professional Union UAW. Its members approved the strike by a vote of 99 percent in favor, and employees are striking across every department, a union representative told Lit Hub.

A HarperCollins spokesperson told Lit Hub in an email that the company does not comment on negotiations. “Our hope is to continue our discussions at the negotiating table,” the spokesperson wrote.

A solidarity fund to benefit striking workers has collected more than $17,000 so far, and the union is continuing to collect donations, as well as posting updates on Instagram and Twitter.