As I age and as the narrative of my life comes into sharper focus, so too does the clarity with which I understand my early influences. By this I don’t mean those cherry-picked names that connect directly with my work now; instead I mean those artists and figures who burrowed their way into my psyche before I was truly cognizant enough to be judicious about what art I engaged in. At a young age, for instance, I collected every Mel Brooks film in VHS and organized them chronologically (I even owned The Twelve Chairs and Life Stinks). I was an obsessive Simpsons fan. I read Stephen King and Michael Crichton novels. And I read Roger Ebert’s reviews and watched his show late on Sunday nights. I was too young to understand why these people captivated my attention and thus their influence on me is more foundational than later books read and films seen.

Now that I’m older these early influences have announced themselves in parts deeply rooted in my personality. The comedy of Mel Brooks, the pace and size of Stephen King novels, and the straightforward criticism of Roger Ebert—each lay at the bottom (and nearly impossible to reach) of who I am. I see that now. But there is one surprising figure in this group—surprising not because of his work but because I nearly didn’t remember being so influenced by him until way later in my life—and that is Gary Larson.

For exactly 15 years—from January 1, 1980 to January 1, 1995—Gary Larson wrote and drew The Far Side, a comic strip so funny and daring and biting that it cleared the path for the likes of Matt Groening and Trey Parker in the 1990s. Larson’s humor relished irony, hypocrisy and stupidity, and his view of humanity was, ultimately, a bleak one. Whenever he wanted to show animals acting idiotically, he attributed human behavior to them, as in the comic featuring a group of cool-looking dinosaurs standing around smoking, with the caption, “The real reason dinosaurs became extinct.” His characters were selfish, short-sighted, and self-aggrandizing. One four-panel strip shows a bear serenely drinking from a brook. In the background, a hunter spies on the animal, and soon shoots it from behind. The bear falls dead onto the ground. The final panel shows the hunter at home, his bear now stuffed and placed into a terrifying attack position, as if the hunter’s kill had been brave and hard-won instead of cowardly and murderous.

Suspicious of institutions, Larson repeatedly lampooned bureaucratic absurdity. A group of people wait in line for Hell, as the Devil, standing at the gate, asks, “Ok, sir, would you like inferno or non-inferno? Ha! Just kidding. It’s all inferno, of course—I just get a kick out of saying that.” Or a boy stands outside the Midvale School for the Gifted. The door says “Pull” but the boy leans into push with all his might. Another one from Hell: an inept painter accidently inscribes “999” over the entrance to the Devil’s office. To the visibly angry Devil the painter feebly explains, “Well, I’ll be… I must’ve been holding the dang work order like this!” All of these strip away the power of large, scary, and faceless institutions, and instead show them to be run and organized by human beings, who can be just as stupid and malicious and, most importantly, wrong as people who aren’t in positions of power.

And of course Larson was funny as hell. Some of his comics still bring about a giggle whenever they pop into my head. A dog tries to lure a cat into the washing machine by writing “Cat fud” on it. As the cat considers the sign, the dog hides just behind the washer, a thought bubble above him in which he thinks, “Oh, please. Oh, please.” Or a drawing from the POV of a shotgun scope, with two bears in its sight. One bear, just behind the other, gutlessly and surreptitiously points to his friend, as if to say, “Kill him, not me.” Or an image of God rolling what look like thin tubes of clay. The caption reads, “God makes the snake,” as God thinks, “Boy… These things are a cinch!” Or another snake one: this one shows a snake with its face stuck underneath it, and the caption reads, “When snakes trip.” What makes this last one work so well is the word “WUMP” above the snake, since we cannot imagine how a snake could trip let alone how it could produce such a noise.

I could go on forever, and when I was younger I was even more obsessed. I owned all of the Far Side Galleries (five in total, with forewords by Stephen King, Jane Goodall, and Robin Williams), and some of the smaller collections like Beyond the Far Side, Weiner Dog Art and The Chickens are Restless. I stacked them in order and routinely admired the set. I read and reread them, flipping through them and picking a page randomly, as if this practice would suddenly present new comics. For years I absorbed the humor and the underlying philosophies of Gary Larson’s strange and savage world. And this has played a large part in who I am.

Perhaps the most important lesson I took from Larson relates to direct and immediate comprehension. When you read The Far Side, you understand the joke, the jab, or the point, immediately, without having to consider much beyond the image and the words. Instead of being simplistic or reductive, Larson’s work seems perfectly on the mark. Compare Larson’s immediate clarity with the work of Banksy, who is also brilliant while still being uncomplicated and easy to “get.” Often brilliant satirists require a lot of outside knowledge or a fair amount of literary scrutiny to fully comprehend a piece of art. Not so with Larson or Bansky. With these two, you can get the piece in the time it takes you to, say, walk past it on a building or, say, see it as you flip through the newspaper. This is an extremely rare skill. Most easy-to-comprehend humor is broad, crude or lightly thrown. With Larson as with Banksy, they present a complicated idea in an easily digestible form.

So now, as an adult, I am endlessly drawn and always impressed with artists who can communicate complexity in ostensible simplicity, who can move you or thrill you or challenge you or just make you laugh your ass off in a few seconds, who don’t need hundreds of pages but merely one, who argue without seeming to preach, who’ve found a form once considered silly or juvenile and elevated it to something profound, and something suited to their genius, and who, finally, figured out a way of smuggling iconoclasm, irreverence and subversion into our daily lives, Bansky on the streets, Larson in the newspapers.

Today, Gary Larson turns 65. He retired The Far Side 20 years ago. In the meantime I had mostly forgotten about my obsession with this brilliant comic strip. I was suddenly reminded of it when I saw a rerun of The Simpsons and there was Gary, making a joke about coming out of retirement so he could be the “in-house cartoonist at nuclear plant.” Everything came rushing back: the hours spent on the floor with one of the Galleries; the feeble attempts at rip-off cartoons I drew; and the sheer enjoyment of engaging with an odd and brilliant mind. My life now has lost some of that oddness, that humorous way of not taking anything seriously. I’ve become, I fear, like one of the morons Larson loved to poke fun at. As I began to write this piece, I went through my shelves and discovered that I don’t own any of the Far Side Galleries any more. Not one. Somehow, I’d lost them. And now I realize that not only was Gary Larson and The Far Side an important part of my upbringing, but also that I wish I still had it in my life, to remind me of the sheer absurdity of existence, the laughable tenuousness on which everything relies, and the fun one can have pointing all this out. I really wish I still had those Galleries. Or, more accurately, I wish I’d stayed the kind of person who would have kept them.

Happy birthday, Gary Larson. You’re still making me feel like an idiot, even after all these years. 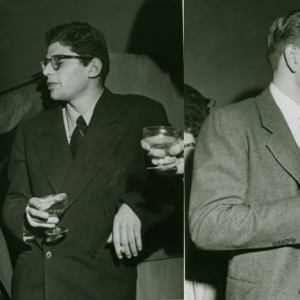 Charles Bukowski's rules for writing: be honest, have a few drinks, submit everything, among other gems. | Literary...
© LitHub
Back to top