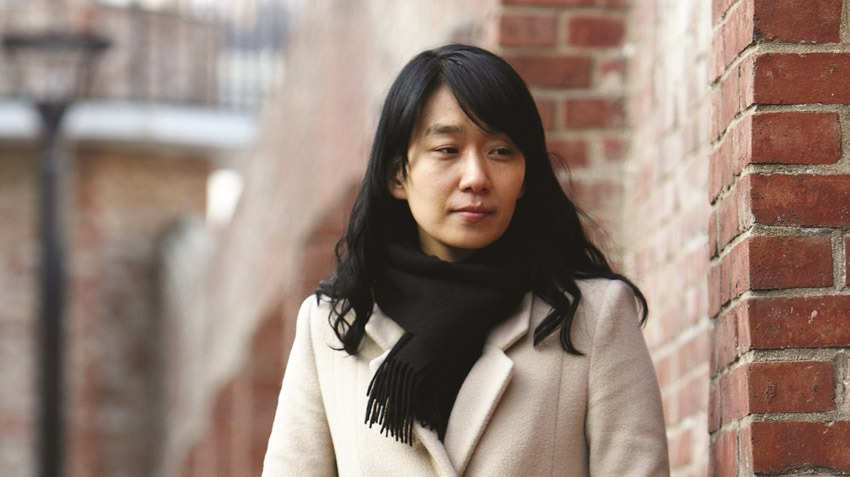 Han Kang on Violence, Beauty, and the (Im)possibility of Innocence

Bethanne Patrick in conversation with the author of The Vegetarian

People often ask me how I choose what I read, a question that is posed to most of my fellow book critics, too. It’s easy when an editor assigns a specific title, or when I already know and love a specific author’s work. Of course I’m going to look out for the new Louise Erdrich or Justin Torres or Reif Larsen.

However, it’s less easy to choose debut authors, or, in the case of Han Kang, authors who are debuting in the US market. Although Ms. Han published The Vegetarian in her native Korea in 2007, her startling and sad novel didn’t reach our shores until this week—in large part due to the efforts of her English translator, Deborah Smith. Luckily for us, we’re now able to enjoy this remarkably paced story of how trauma reverberates through a family, a story very much of its place and culture but with messages for any human being, anywhere.

Due to the time difference and the Lunar New Year holiday, Han and I conducted this interview via email. Below, her thoughtful responses about why The Vegetarian is “not an indictment of the Korean patriarchy,” how Korea’s literary scene differs from our own, and how she sees the world as “mingled violence and beauty.”

Bethanne Patrick: What is it like to have so much success with a novel you initially published over a decade ago?

Han Kang: Whenever I finish a novel, somehow I feel I am expelled from it. However, partly because this novel has been published one by one in different languages for nine years, I still feel close to this book, mostly because this novel is intertwined with my recent one, Human Acts. Although these two works look very different, I feel that they are a pair.

BP: How did the idea for The Vegetarian originally come to you? Was it an image? The character of Yeong-hye? Something else?

HK: The image of a woman turning into a plant. I wrote a short story, “The Fruit of My Woman,” in 1997, where a woman literally turns into a plant. After several years I reworked this image in The Vegetarian, in a darker and fiercer way.

BP: The events and themes in your novel are extremely potent: Physical and sexual abuse, abandonment, self-harm, eroticism, much more. Have any reader or critic reactions surprised you? Have they, for instance, fixed on one aspect of the story and missed another?

HK: I think this novel has some layers: questioning human violence and the (im)possibility of innocence; defining sanity and madness; the (im)possibility of understanding others, body as the last refuge or the last determination, and some more. It will be inevitable that different aspects are more focused on by different readers and cultural backgrounds. If I could say one thing, this novel isn’t a singular indictment of the Korean patriarchy. I wanted to deal with my long-lasting questions about the possibility/impossibility of innocence in this world, which is mingled with such violence and beauty. These were universal questions that occupied me as I wrote it.

BP: We in the United States tend to miss a lot of literature from the rest of the world. We certainly don’t know much about the Korean literary scene and tradition. How are you part of those, and also not?

HK: The Korean literary scene is different from western ones in some aspects. For example, it has a strong tradition of poetry and short stories. Most fiction writers start their careers as short story writers. I myself started with short stories (and poetry). I feel I have a great debt to literature written in Korean because I literally grew up with it. Also, I could read the literary works translated into Korean from a lot of languages, without any distinction such as which is foreign or not. I still do that. I just read.

BP: Speaking of Korean literature, as long as we make sure to read your book first, which other authors should we know about? Types of books?

HK: Poetry and short stories are very strong here. There are also good novel writers. Lim Chulwoo is my favorite; I like Hwang Jeong-eun as well.

BP: What was the translation process like for you, with your translator Deborah Smith?

HK: Deborah usually sends me the file of her translation after she finishes, with notes and questions. And I send it back to her with my answers and notes. It is just like having a chat endlessly. I truly enjoy this process. I am lucky to have met Deborah, a wonderful translator who can render subtlety and delicacy.

BP: Which authors inspire your work, and why?

HK: It isn’t easy for me to namecheck favorite writers because they always change. I feel inspired by visual art as well, perhaps even more. However, it is also difficult for me to name particular artists. (Yet I put one of the self portraits of Käthe Kolwitz on the wall of my room wherever I move.)

BP: In The Vegetarian, your main character Yeong-hye’s process of self-denial springs from deep, brutal experiences, and it causes deep, brutal events in her family. In the West, we see elements of Greek tragedy in such a plot. Does that concept influence your writing? If yes, how? If no, please explain.

HK: For Yeong-hye, I just followed the imagery, which came to me when I was 26, of a woman who turns into a plant. I think the book’s second part more or less has the structure of a traditional tragedy. I wanted to deal with the process by which a human being crumbles and crashes due to the fissure which arises within himself. I thought that internal process needed to be described with a maximum amount of detail. The part I like the most in this section is the scene in which “he” keeps on talking to himself about death while driving to meet Yeong-hye. For me, that suffering was the core of this character.

BP: One critic called this “a trilogy of stories.” Here it is considered a novel. Does the distinction matter to you?

HK: I think this is a novel. Trilogy or triptych, which consists of three independent novellas.

BP: While there are certainly cultural differences between your characters in Korea and women in other parts of the world, one thing that doesn’t change is how women’s bodies are sexualized, pulled apart by men even through a simple glance. It’s shocking to have one character obsessed with his wife’s braless nipples while other family members tear into meat. Where do Korean women feel they stand in terms of feminism’s progress?

HK: South Korea has undergone many changes very quickly, so a lot of things have become kind of hybrid here. As for feminism’s progress, statistics show that many Korean women are well educated and perform impressively in their careers. There was a boom of feminism in the 1990s here, and some people say this term sounds a bit out of fashion to the public now. However, women are still striving, with issues either apparent or hidden. There is one peculiar thing about the Korean literary scene. Female writers have slightly outnumbered male writers since the 1990s, and nowadays neither readers nor critics make the distinction about whether a certain writer is male or female. It seems a curious phenomenon because Korean society itself is quite conservative.

BP: We’ve spoken about women; now a moment for the men, who are extremely important to the story. The voices of Mr. Cheong, the father, Ji-woo’s father, and J. are all quite distinct. Could you talk about what it was like writing these characters?

HK: As I said before, this novel deals with human violence and the (im)possibility of refusing it. Yeong-hye desperately refuses meat to reject human brutality from herself. Furthermore, she doesn’t want to belong to the human race any longer, and believes that she is being transformed into a plant. Her father, a veteran from the Vietnamese war, tries to force her to eat meat. This violent scene appears in three sections repeatedly. It recurs in the third section when the doctors try to feed Yeong-hye in the psychiatric hospital. At the risk of oversimplifying, I could say these characters are sharing (and personifying) the similar violence to the determination of Yeong-hye.

BP: Although the bulk of the caregiving In-hye does for Yeong-hye comes at the end of the book, there really is no start or finish to it. The Vegetarian is almost an inversion tale; usually we first see the damaged, challenged person but don’t know their backstory. Your comment(s)?

HK: In the last part, I didn’t want to describe the death of Yeong-hye. I wanted to end this book with the final scene, where In-hye looks out the ambulance window with a protesting gaze. I felt that this was a scene of gazing with all one’s energy at this world of mingled violence and beauty. Without start or finish, only struggling tenaciously with her open eyes, in the same form/way of “now” in our life.

BP: Recently a German scientist wrote an important book (it has not been translated into English, yet) about the lives of trees, their social networks/bonds, and how animate they truly are. You clearly understand a great deal about trees and plants. How did you learn this/research this aspect of the book?

HK: I would like to read that! I had read some books about the lives of plants and enjoyed them. However, I didn’t research this aspect for this book. Instead, I met up with a video artist and learned how he makes his work (which has a completely different content than the video art in my book) to write the second part of The Vegetarian. For the third part, thankfully I was able to visit a psychiatric hospital through a doctor’s introduction. All of those details were a great help.

BP: From the US cover, we can tell that your novel has something to do with roots and rootedness. Tell us about your thoughts on this, and about the Korean experience in feeling rooted to the land.

HK: Yeong-hye is such a determined person that she believes herself to no longer belong to the human race. She feels and wants to get literally uprooted from human beings. In this way she believes she is saving herself, but ironically she is actually approaching death. Of course, in the real world she is mad, but to her it is something thoroughly sane. She is trying to root herself into this extreme and bizarre sanity by uprooting herself from the surface of this world.

BP: What are you working on next? Will people who read this novel see another book from you soon?

HK: My recent novel, Human Acts, will come out in the US next year. A little while ago I wrote a very short book that’s difficult to classify, a kind of essay-cum-prose poem. It is scheduled to be published this June in South Korea. For my next full novel, I’m writing another three-part work. I have already completed the first novella and am writing the second one now. As I don’t want to rush with this work, I am going write it as slowly as possible. 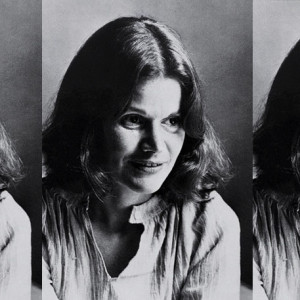 Stuart Evers tries to figure out what makes something funny, tells a couple jokes along the way. | Literary Hub Han...
© LitHub
Back to top