Hamlet Was a Bro Who Didn’t Even Like Sex

Jillian Keenan Makes Much Ado About 'Nothing'

What strikes me most about Hamlet, and Hamlet, is nothing.

Whenever Shakespeare repeats a word, I think it deserves special attention. In Hamlet, nothing comes up thirty-one different times. The play begins when a night watchman declares that he has “seen nothing.” Ophelia claims to think “nothing.” Hamlet spends most of the play doing nothing—which might be okay, depending on your opinion, since there is “nothing either good or bad but thinking makes it so.”

I think “nothing” is a fair way to describe Hamlet’s sexuality, too. Hamlet is sexually indifferent. He tells us as much when he says, “Man delights not me—no, nor woman neither.” Despite that, I suspect that Hamlet and Ophelia slept together; near the end of the play, when Ophelia goes mad, her comments seem to hint as much:

Then up he rose and donn’ d his clothes, And dupp’ d the chamber-door,

Let in the maid, that out a maid

Young men will do’t if they come to’t, By Cock, they are to blame.

Quoth she, ‘Before you tumbled me, You promis’ d me to wed.’

If Ophelia lost her virginity to Hamlet before the play begins, imagine how terrorized she must feel when her father and brother both lecture her on the importance of preserving her chastity. They tell her that she will become worthless without her virtue, but what if that “virtue” is already gone? The possibility makes Hamlet seem that much more cruel when he taunts Ophelia with lewd sexual allusions and tells her to get herself to a “nunnery,” which was Elizabethan slang for a whorehouse. If Hamlet is sexually indifferent, his disgust for sexuality—and contempt for women who display it—seems like a logical (if unforgivable) outlet of that frustration. Hamlet fears that his sexual indifference makes him worthless, so he cruelly punishes Gertrude and Ophelia for their lack of indifference.

After Hamlet mocks Ophelia’s makeup, her flirtations, and other indicators of her sexuality, he says once again that she should go to a nunnery and leaves. Left alone, Ophelia says: “O, what a noble mind is here o’erthrown! The courtier’s, soldier’s, scholar’s, eye, tongue, sword.” I have never seen this moment portrayed as anything but sincere and straightforward: Ophelia, we are told, is sad to see such a “noble” mind descend into madness.

Why do we so often take that sentence at such face value? Something is wrong with it! Hamlet has a courtier’s eye? A soldier’s tongue? And a scholar’s sword? Those parallels are mixed up. If Ophelia means to praise Hamlet (or bemoan his loss) it’d be more apt to say that he has the flattering tongue of a courtier, the powerful sword of a soldier, and the sharp eye of a scholar. But that’s not what she says. Is the mix-up a first indicator of Ophelia’s descent into madness? Or is it, like the bold retort she shoots at her brother, Laertes, when he lectures her about virginity, a sarcastic hint that this woman has more vinegar than we realize? I don’t think Ophelia’s comment seems insane—I think it seems clever. Hamlet does have the shallow, superficial eye of a courtier. He has a tongue that can wound, just as a soldier can.

As for the sword of a scholar? Well, well. Perhaps murder is not the only occasion to which Hamlet cannot rise. Nothing kills sex like overthinking it.

The word nothing has another meaning, too. In Elizabethan slang, nothing was a term for female genitalia. (Men have a “thing” between their legs; women have “no thing.”) When Hamlet taunts Ophelia in Act Three, he sexually harasses her with this slang.

I read Hamlet for the first time in the Stanford Coffee House, and could picture the scene so easily. Hamlet could be any one of the men on campus—some douche bag in a pink polo shirt, no doubt. He strolls into the CoHo, trailed by a string of friends and wallowing in his own prideful pain.

“Lady, shall I lie in your lap?” he says. The jibe prompts a round of cruel guffaws and high-fives from his entourage of bros. Ophelia, hurt and humiliated, can’t reply as she would like. (Her sassy side is reserved for her brother, Laertes—the only man who gets to see behind Ophelia’s façade of respectful obedience.) Hamlet is the president of Sigma Nu, and Ophelia wants to pledge Pi Phi. She knows better than to piss off the most powerful asshole in the Greek system. So she swallows her rage and tries to end the conversation.

“No, my lord,” she replies. Hamlet keeps going.

“I mean, my head upon your lap,” he exclaims, raising his hands in mock horror, as if Ophelia had imagined him inside her, rather than upon her. The Sigma Nu bros snort with laughter. Ophelia shifts uncomfortably in her seat.

“Ay, my lord,” she replies. Her eyes are fixed on her latte. But Hamlet won’t let it go.

“Do you think I meant country matters?” he says, emphasizing the first syllable of country so loudly that heads turn across the room.

“I think nothing, my lord,” she mutters. By now, her protestations are almost inaudible.

Hamlet bends over the table. His face is close to her own. “That’s a fair thought to lie between maids’ legs,” he snarls. “What is, my lord?” Ophelia replies. She doesn’t realize it, but she just set up Hamlet’s big punch line. “Nothing,” he says.

It’s a timeless coup de grâce. Ophelia’s sexuality is, at once, both “nothing”—nothing valuable, nothing real, nothing worthwhile—and something used to terrorize and humiliate her. It’s no mistake that later, when Ophelia becomes insane and incoherent, Gertrude remarks that “her speech is nothing” (emphasis mine).

Elaine Showalter, an academic rock star, nailed Ophelia’s place within the world of Hamlet. “Deprived of thought, sexuality, language,” Showalter writes, “Ophelia’s story becomes the Story of O—the zero, the empty circle or mystery of feminine difference, the cipher of female sexuality to be deciphered by feminist inter- pretation.” (The Story of O, of course, is the landmark 1954 erotic novel about sadomasochism, dominance, and submission.) As I looked across the campus coffee shop at Ophelia that day, I finally understood, for the first time, that my own story of O could just as easily become a story of zero: one of emptiness, dissatisfaction, and nothing.

At the far end of the coffee shop, a door opened. A man walked in and ordered four shots of espresso. My face was pointed at my book, and I didn’t see him.

I wish I had looked up. If I had, I would’ve seen a handsome face obscured by a baseball cap.

Jillian Keenan is a freelance writer based in New York. She has written for The New York Times, The New Yorker, The Washington Post, Slate, The Atlantic, The Daily Beast, Al Jazeera America, Scientific American and elsewhere. Her first book, SEX WITH SHAKESPEARE, is out now from William Morrow. 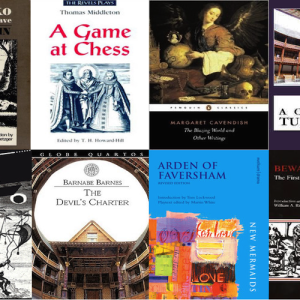 There is some sort of literary law of physics which says that sooner or later, in any piece about William Shakespeare, the author...
© LitHub
Back to top