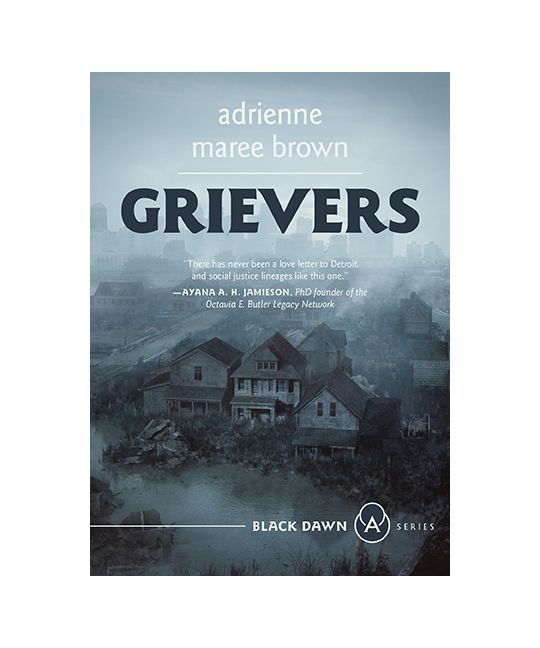 The following is excerpted from adrienne maree brown’s novel, Grievers. brown is a writer living in Detroit. She is a student of the works of Octavia E. Butler and Ursula K. Le Guin. Grievers is her first novel. Her previous books include Octavia’s Brood, Emergent Strategy, Pleasure Activism, and We Will Not Cancel Us. Her fiction has appeared in The Funambulist, Harvard Design Review, and Dark Mountain.

The morning after her mother was made into ash, Dune came to as the sun crested the horizon. She had passed the night on the couch in the living room, an alchemy of whiskey and weed helping her mind quiet for a couple of hours. The detritus was still on the coffee table.

The afternoon before, after sitting by the bed until her mama’s skin was cold, Dune had wrapped Kama in the yellow flowered sheets of her deathbed and dragged her into the yard. She had piled wood, leaves, old print-outs of nonprofit strategic plans and other kindling under and around her mother, thrown matches into the chaotic pyre and blown her lungs out until everything was fire.

For hours in the moonless dark, Dune had fed the fire, keeping the flames rising. She’d been quiet as she tended the pyre, nauseous at times, a sense of burning up inside herself. A new feeling. An unbearable yawning emptiness. She knew that if she let it become a sound, this raging vacuous heat would undo her bones. Even when a longing to wail had possessed her small body, she kept it internal.

Now, in the hush of morning, she wondered if anyone had seen her, smelled her fire, heard her. Detroit nights were full of wild sounds.

The coming day was unfolding in bruised steel and lilac as she slipped out the back door and crossed the wild grasses of the yard to the fire pit. The sun reached its own small flames across the under-ridges of cloud. Dune crouched, sifting her long fingers through the ashes, still warm in places, unaware at first of what she was doing.

Dune had read everything the internet could tell her about cremation. Four nights before Kama died, Dune ended up down a rabbit hole of pyre stories. She’d read some of the history aloud to her absent mother, partially for some accountability, mostly knowing her mother would appreciate the drama.

Burning was the best way to dispose of bodies that died mysteriously, according to a random comment on a pyre video. Commercial cremation left nothing behind, but outside of a furnace it was hard to get the fire hot enough to truly burn everything away. Cremation wasn’t meant to happen in backyards, in the middle of cities. But Dune didn’t trust the system that had sent her mother home to attend to this sacred work.

Dune had pulled concrete blocks and a square of stone into a kind of open-air oven. For the base of the pyre, she had used some wood her late father had purchased for a deck he’d never quite started. The sentimental wood had leaned against the side of the house for a decade, wrapped in tarps.

The fire had burned for more than six hours, her mother disappearing inside it.

Dune was grateful no one had come around, grateful their yard faced an empty building. Grateful now to have no witnesses as she dragged her hands through the soft pile, seeking.

When she found the first bone in the ashes, she gasped. This was what she’d been looking for. It was slightly rounded in her palm, just longer than her hand—maybe a rib. The bone was warm to the touch, dark, grainy, gray. She slid her thumb along it, rubbing her mother’s ashes into her mother’s bone, breathless at the intimacy of this holding, this touch. She placed the bone to her lips, and then between her teeth, pulling her shirt over her head. She wrapped the bone in soft black cotton.

Dune stood in the yard in her sports bra, boxers, socks and slippers. Her braids held, but she hadn’t touched them since Kama got sick, so free hairs frizzed around her head, catching light. The cicadas were singing all around her, the constant sound of Detroit summers, pulsing, pulsing, singing of life.

She squatted down, brushing her fingers through the ashes with a greater sense of purpose. Each bone she found was distinct from the texture of wood, was smooth and sturdy in her palms. They had danced in the fire, not quite keeping their skeletal order. Here was one of her mother’s long leg bones, these small bones were her mother’s fingers, or perhaps bones from her mother’s feet.

She found an intact section of Kama’s jaw, her mother’s skull.

Hours passed, the sun casting more and more light on the ash, sweat pooling at her elbows, behind her knees. When she couldn’t find any more of her mother, she cradled the bones against her, swaddled in her shirt like an infant. She walked them inside, laying them on Kama’s pillow, over the lace duvet woven with roses.

In the living room she found the two “Chinese antique” vases Kama had bought at a street fair, pale pink, dotted with dragons, tall as her knee. She carried them, one by one, back out to the fire. She scooped handfuls of her mother’s pyre ashes into them until they were both heavy. She slowly scooted them back inside, grateful that even now her mother was heavy. Dune placed one vase on either side of Kama’s bed. They were smudged with her mother, she left them that way.

Holding her hands up like a surgeon, Dune went to the kitchen sink and reluctantly rinsed with warm water. Here was the place. This spot, by the sink, was where her mother had been standing when the sickness came.

Dune looked out the window. What was Kama’s last conscious sight?

Midsummer maples spread wide, clematis vines climbing aggressively up the black brick and balconies of the abandoned apartments across the alley, where the uniformly square windows used to reflect sunsets on good days. Now the glassless windows swallowed light. The stray dog that Dune felt deep affection for was laying against the far wall, tongue soft.

Mostly, all she saw was emptiness.

It was a morbid honor, being one of the first people to get sick. Dune thought Kama might have been interested if it became a historical note, but then couldn’t think of any pioneers of sickness. The first people with a plague were never celebrated, even though that was such a frightening, innocent position, to die with so little context.

The first people with a plague were never celebrated, even though that was such a frightening, innocent position, to die with so little context.

Hours after Dune had retrieved her mother from the yard, a police officer and an infectious disease specialist came to the door, two men, both wearing gloves and white masks over their mouths. They asked to speak to Kama, having heard from Dr. Natasha Rogers that she was the first person documented with these symptoms, which had now shown up in double digits. They expressed the requisite bare minimum sympathy when Dune said that Kama was dead, but didn’t leave. In fact, their questions came faster.

Here, in her room.

The hospital wouldn’t keep her, we couldn’t afford it.

She was talking, in the kitchen, and she stopped talking and froze.

Sure, right through there.

She wouldn’t eat. She wouldn’t drink. She choked if I tried . . . Her face just looked really sad.

No, I don’t have a death certificate.

This flummoxed the pair. There was some back and forth between them about whether what she had done was legal, Dune said nothing. The officer was pretty sure it wasn’t legal, the specialist said it was smart. Both were unclear of what to do next. They advised her to do what she was already doing, staying home.

She only asked them one question, “Are the hospitals still turning people away?”

We Are Still Here! by Traci Sorell, Read by a Full Cast 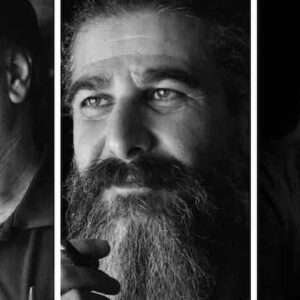