Grief and Recovery in Thousand Oaks

Liska Jacobs on Her Hometown's Navigation of Dual Tragedies

I once did the hokey pokey at the Borderline Bar and Grill. I’m sure I danced with a sense of irony, I don’t like country music very much, but I remember it was a weeknight and the Borderline was one of the few places in Thousand Oaks that allowed young people. It wasn’t just a bar. They had food and billiards and themed nights that seemed silly, but in a small town it was something to do. And its central location meant it was a meeting place of sorts. You could run into your friends, or your parents’ friends.

I moved to Thousand Oaks when I was twelve. It’s where I met my husband. Where my mother and younger sister still live. When I think of it I picture the quiet, serene nighttime streets most. Sprinklers in the center divider, spraying young oaks, a coyote passing the wide lanes, bounding into a suburban backyard. Rose-pink cinderblock walls, the bulky two-story tract homes, sycamores and aspens in the front yard. Large trucks in the driveways. Off-roading is popular here, as is Little League and church—almost as popular as a slice from Tony’s pizza or a sub from D Mongeon’s or a breakfast burrito from P & L Burger, all businesses still family-owned. It’s where we spend each Christmas and Thanksgiving—and why, when we heard about the shooting, my husband and I immediately drove from our apartment in Los Angeles to his parents in Thousand Oaks.

My mother-in-law was home alone. Police and FBI swarmed just up the street. I never thought it would happen here, she said when she answered the door, pale and already crying. My husband’s father—a Marine corps vet set to retire next year from law enforcement—was hit particularly hard. The shooter lived a few blocks up, on the same stretch of street as my husband’s childhood friend. While we picked at avocado sandwiches, we listened to the unusual amount of car traffic from news vans and police cars, the helicopters beating above.

The wind picked up suddenly, pulling ferociously at the windows and backyard. My sister called, she had been at the procession for the Sheriff who died. I’ve never cried so hard in my life, she told me. I wanted to vomit. She had stood with others along Lynn Road, holding flowers and a small American flag. She struggled to get a hold of herself. She needed to pick up her daughter, my three-year-old niece, from preschool. Let’s go on a hike, I suggested. Clear our heads. Because the Santa Monica mountains are right there. You can see the dramatic serrated ridge of Boney Mountain from my mother-in-law’s kitchen window. The western edge of the Santa Monica Mountains ends here, abruptly shifting into rolling hills and grassland, eventually giving way to the Oxnard basin.

Another thing about Thousand Oaks: its proximity to those mountains has shaped the community as much as the community has shaped those mountains. We grew up exploring the chaparral-covered hillsides, the sandstone outcrops, the oak forests with its sage and bay laurel and manzanitas, its bark as smooth as animal hide. In elementary school we took field trips to Satwiwa, the western most part of the park, and learned about the Chumash who lived there. We wondered at the pictographs drawn in carved-out water caverns. My father, who moved us from Los Angeles to Thousand Oaks, took us on hikes nearly every weekend. We had to learn the Latin names of native plants. Mimulus aurantiacus, or sticky monkeyflower. Bright yellow, it grows along dry slopes and between rocky crags. He still teases my younger sister that she was almost named after it. These are sacred mountains, he often said. A philosophy we shared with the Chumash.

My sister’s house survived but six others on her street did not. Memorials for the shooting victims coexist with fundraisers for those affected by the fires.

Oh no, my petite mother-in-law said, as she walked us out. A smear of dusky smoke spanned a portion of sky. We tried to soothe her, maybe it was just a small car fire. The 101 freeway cuts through Thousand Oaks before plunging down the grade towards Camarillo. Plans were changed, we did not want to hike in the now-smoky wind. My sister and I decided to visit my mom at her work instead. My mother had spent the morning texting with us and my younger brother, who went to high school with the shooter and knew several of the victims’ families. I haven’t been able to get anything done, she lamented. Blue heart emojis. We passed empty parks, deserted streets. The flag in front of the In-N-Out at half-mast. The plume of smoke growing larger and darker behind us.

The Conejo Unified School District offices, where my mother works, is across from the Teen Center, which had been turned into a reunification center for families affected by the shooting. All day we’ve seen people come and ago, my mother said when we arrived. Her coworkers came out to smile and play with my niece, offering her surplus Halloween candy in exchange for hugs. Oh I needed that, one of them said. They had been waiting for the victims’ names to be released because, my mother explained, chances are they had gone through the school district. We will know them, her coworker whispered as we watched my niece play tag with my husband. They talked about the ones they already knew: friends of friends, Susan’s daughter’s boyfriend, my son’s old wrestling coach. Somewhere a buzzer. The regional transportation manager jumped up to answer a phone call. Within moments the office was coordinating school evacuations. There were two wildfires now, one on either side of the town. The freeway heading north on the 101 was shut down. We watched as the Teen Center was turned into an evacuation center.

The fires felt like an additional blow on an already devastating day. And then later that night, with the Santa Ana winds still raging, the fires grew quickly, forcing the same family and friends we had seen earlier to evacuate. Grief was put on hold. Family came to stay with us in Los Angeles, the smoke eventually making its way here. The skyline turned blood red, even at night the sliver of moon was crimson. My sister’s house survived but six others on her street did not. Memorials for the shooting victims coexist with fundraisers for those affected by the fires. Schools remain closed. In preparation for Thanksgiving my sister has cleaned up the ash on her back patio, washed the cushions from the courtyard chairs, tried to air air out all the rooms. Neighbors and friends who have lost more than us have been invited. But still, when the wind changes, the acrid scent of fire retardant and burned brush returns. Shoulders tense at sirens.

It is heartbreaking, I told my father, who reminded me that the Santa Monica Mountains are fire broken. They are resilient to flame. An oak tree may see seven or more fires in its life time. There are some wildflowers that don’t bloom until the land burns. Chamise ceanothus, with its wisps of white flowers. Papaver californicum, known as the fire poppy. Or my favorite, Calochortus catalinae, the Santa Catalina mariposa lily which has delicate silky petals. Take comfort in knowing this. It will take time, and scars will remain—there is evidence of ancient fires in the mountains’ rock strata—but we will endure.

Why Have Writers Neglected Elderly Lovers? 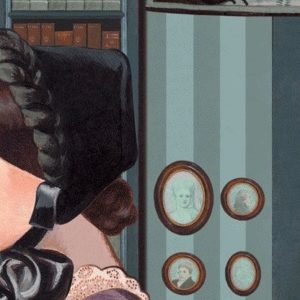 Admirers of Middlemarch often cite Virginia Woolf ’s description of George Eliot’s novel as "one of the few English...
© LitHub
Back to top