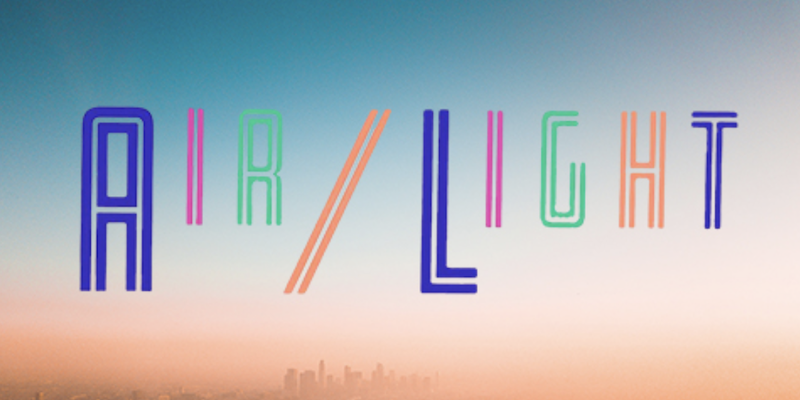 Air/Light is a brand new literary magazine—launched today!—helmed by Editor-in-Chief David Ulin, with support from the University of Southern California English department, that aims to “celebrate an inclusive culture, illuminating voices from a diverse array of writers.”

According to its press release, Air/Light takes its name from Lawrence Weschler’s 1998 New Yorker essay “L.A. Glows,” which describes a meteorological condition endemic to Southern California. The phenomenon, known as “airlight” exists because the air of Los Angeles is filled with oversized particles, which both reflect and amplify light and leads to optical effects that are obscuring.

In celebration of Air/Light’s inaugural issue, I asked David Ulin a few questions about the magazine. Below, you’ll find responses that explain the magazine’s mission, its first issue and special programming.

What would you most like potential readers to know about this magazine? What inspired you to create Air/Light?

DAVID ULIN: Air/Light has been in the works for a while now—a couple of years since the first discussions began. It developed out of a series of conversations—between myself, managing editor Aaron Winslow, USC English Department chair David St. John, and editors-at-large Aimee Bender, Dana Johnson, and Danzy Senna. We were interested in trying to create a magazine that could blend the coherence of a quarterly print issue with the immediacy and fluidity of publishing online. We also wanted to be able to open up the rubric of the literary journal: to publish traditional stories and poems and essays, but also to break those categories open when necessary or to disregard them altogether if we chose. We wanted to be able to explore multimedia storytelling, visuals and music, games and performance—the full range of narrative in all its possibilities.

What can you tell us about Air/Light’s inaugural issue? What do you find most compelling about the work featured? How are they unified? How do they diverge?

DAVID ULIN: The first issue features a variety of work that we think is quite remarkable, both together and on its own. We’ll be launching with five selections, including the essay “Little Earthquakes” by Vickie Vertiz; “The Undercurrent,” a new short story by Lilliam Rivera; Susan Straight’s essay “Wall,” about the border; Emily Hodgson Anderson’s “No Room of One’s Own”; and a suite of poems by Lynne Thompson. What’s most compelling about this work are the voices. This is what we are looking for, writers who are pointed, sharp-elbowed, not afraid to say what needs to be said. As to what that means, well… that’s the beauty of the enterprise: the writers get to decide. We want to be a writers’ journal, an artists’ journal, a journal that gives artists the breadth and space they need. Our only criteria is the work itself—it’s urgency, its necessity. Often, this is political; often, personal. (To be honest, I don’t see a distinction between the two.) What I think the work in this issue offers is a multi-faceted portrait of where we are right now, what we are thinking about, what we are addressing, our concerns and fears and desires, a kind of collage portrait of our collective consciousness.

How do you think this magazine cultivates literary community?

DAVID ULIN: I think this is an excellent question, although I might adjust it slightly because I don’t think we’re trying to cultivate a literary community so much as participate in one (or more). In part, that has to do with California, which has a vibrant literary culture, although often that has been overlooked or minimized by the literary culture of the east. We want to represent that California sensibility—but not in an inward-looking way. What I mean is that we want to gaze out from California, to engage with national and international culture, to be in conversation with writers and readers all across the globe. We are a California journal in the sense that we are made in California, but we mean to push back against the narrow definitions of regionalism, which often seem like strategies to maintain the literary status quo. What does it mean to write and edit from California? And how do we connect with other regions and communities? How do we participate in a truly global literature?

Is there any special programming for readers to look out for?

DAVID ULIN: Because of the digital nature of the journal, there will be special programming, so to speak. Among the first pieces we will post, as an example, is video from a poetry event that took place, digitally, at USC in September: “Cartography of Poets,” a group reading featuring Robin Coste Lewis, Garrett Hongo, Dana Gioia, David St. John, Gail Wronsky, and Luis J. Rodriguez. There will be more of that—readings and video discussions, craft talks and conversations. In addition, we will be posting as part of the first issue video of a dance piece with a libretto written and performed by the poet Douglas Kearney, along with the text of the libretto. And we also intend to use playlists, audio files, and video sidebars, where we ask contributors about their work.

What were some of the challenges, if any, of making this first issue?

DAVID ULIN: Starting anything is always challenging, and in the middle of our work on this, the pandemic happened, and the world as we had known and imagined it became something different overnight. You’ll see that in the work in this first issue—a lot of it deals with the uncertainty of the present moment, the rage and fear and weightlessness. On a more practical front, the challenge is to make an issue that is coherent, but also be able to break it into smaller coherent chunks. Our plan has always been to announce the issue at the beginning of the quarter, so to speak—fall, winter, spring, summer—which means publishing a full table of contents, but also to roll it out, a couple of pieces at a time, over a number of weeks. What this means is that we have to be thinking, simultaneously in the macro and the micro, to keep an eye on the big and small picture all at once.