“Girls with the Sun in Their Eyes” 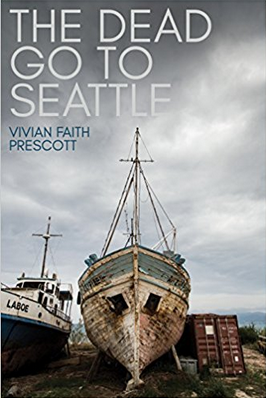 The following is from Vivian Faith Prescott’s collection, The Dead Go to Seattle. In Prescott’s debut collection, a young Native American woman confronts colonialism, homophobia, and a history of erasure by reclaiming the stories of her people. Vivian Faith Prescott is a fifth generation Alaskan, born and raised on the small island of Wrangell. she is the recipient of a Rasmuson Fellowship and the Jason Wenger Award for Literary Excellence from the University of Alaska.

The cold water jabbed Suvi’s skin like a thousand sea urchin pricks. There was only a couple of degrees difference between winter and summer water temperatures in Southeast Alaska. But now, she could hardly feel it. She hung onto the dock, and then plunged her head into Wrangell’s green harbor water. When she raised her head, she spit water up onto her sister Mina.

“Cut that out,” Mina cried, wiping water from her skin. Mina sat on the bull rail, her bright orange life jacket pillowed under her chin. Beside her, Rikka, the youngest sister, sat without a life jacket in cutoff Levi’s and a blue Hawaiian-print halter top.

Rikka hung her legs over, the waterline licking her calves. “I’m not sure this is a good idea. It’s only May.” Rikka’s red hair tied up in a ponytail, but it was still too long. The ends of her hair brushed the dock like a deck broom.

Suvi nodded, her old orange life jacket rising to her ears. She wiped her wet hair from her eyes. “Jump in. It’s only cold for a second and after you’re numb.”

“I’m busy,” Mina said, nodding toward the large white troller moored across on the next finger.

Suvi sighed. One would never know Mina was boy crazy, but she was. She didn’t talk about it much because she didn’t like to be teased. Mina was the quiet one, Momma had always said. Mina was the “mousey” one, Momma said, too. Momma called Mina’s hair “mousey.” Mina yanked her mousey hair out whenever she was stressed. Momma called her girls “kaleidoscope girls”: one red, one blonde, and one brunette. And they were close together in age. She was the oldest, sixteen; Mina, fourteen; and Rikka, twelve. But Momma wasn’t giving advice anymore. They’d forgotten how Momma looked and what she even sounded like since she’d run off with the cult weirdoes. They’d spent half their life without her already.

Suvi moved her arms back and forth, trying to keep warm. She knew what a cult was. She’d read about them in the book she snuck from the library: Helter Skelter. They weren’t supposed to talk about it. No one, not even Daddy, had explained it. She used to think Momma might be worshiping the Devil because Rikka had overheard someone saying that at school. Maybe that was true. Now, they all slept with cross necklaces on and stuffed animals around their bed. Something was going to protect them.

Suvi turned around, bobbing in the water. She eyed the newly painted Sea Wolf and the young man on deck sticking halibut gear. “Oh, him.”

Mina jumped up to her feet. “You little . . .” She leaned forward and in a split second she jumped into the harbor, her life jacket popping her fast up to the surface. She flapped her arms toward Suvi. Suvi twirled and swam toward the Sea Wolf.

“Ah, come on,” Rikka yelled from the dock. Then, without a life jacket on, she sat up straight and arched her back and shoved her body out.

She slunk down into the water, like a seal sliding off the dock. As she entered the water, she gasped “God, that’s cold.”

With a few long strokes of her lanky limbs, Rikka swam next to Mina. Mina still dog-paddled toward Suvi, who floated near the boat already.

Suvi reached the side of the Sea Wolf. The young man looked over the gunwales at her. “Hi,” she said.

“Really. Really. It only stings for a second.” The young man laughed.

Grease dotted his white T-shirt. His dark brown hair was cut with sideburns like Elton John’s. Even his hair was receding a bit and he was stalky like most of the men in their father’s side of the family, and, like Elton. It was then the song came rising from her toes. She had to sing. She couldn’t control the urge. She started to sing the one song she knew all the way through by heart.

The young man took a cigarette out of his T-shirt pocket and lit it with his Zippo. He blew smoke down at Suvi. “I get that all the time. You know that’s a Beatles remake?”

“I do. But I like Elton’s version better. And I think Elton is sexier. Seems like guys are trying too much to look like Jesus. Elton’s different.”

Suvi sunk down into the water. Bubbles floated up to the surface. She popped up, wiping water down her face. She opened her eyes and sang.

The young man smiled down at her. “Well, I don’t sing. Not at all.

Well, except when I’m out fishing and there’s no one to hear me.”

Suvi laughed and flopped around to her back, kicking the water.

She smiled at him. She liked the way he looked at her.

Mina paddled up beside her, almost out of breath. “What are you doing?”

“Hank,” the young man said, blowing out smoke from his cigarette. He sat on the rail now. He flung the remainder of his cigarette out into the water.

Rikka joined them treading water. Her hair, undone now, spread around the three of them like a bed of kelp.

Suvi liked the way her sister’s hair felt like wet feathers. She brushed it away and asked Hank, “Why don’t you join us?”

Hank grinned and then turned to look at the pilothouse. “Sure, why not.”

Hank hopped off the rail, standing up on the deck. He undid his belt, letting his Levi’s fall to his knees. Rikka turned her head. But Suvi and Mina stared at Hank’s white underwear. He pulled his T-shirt over his head and let it fall on the deck on top of his pants. He stepped up on the rail and leaped into the water beside them.

Hank exploded through the surface of the water, shaking his head like a dog. He inhaled. “It’s c-c-c-cold,” he chattered.

Hank splashed her back and then turned to splash Mina.

Rikka dove beneath Hank, jerking at his legs. Hank went down, and Suvi and Mina laughed. As Rikka released him, Hank bobbed back up and swam to the surface and splashed Mina again.

Mina giggled, blushing despite the cold.

Hank laughed and then coughed. “Shouldn’t smoke so much,” Mina said. “Yeah, it’s bad for you,” Rikka added.

Hank half-coughed and half-laughed, sounding like a barking sea lion.

Rikka moved toward him, her long red hair caressing his bare chest. He smiled at her, looking into her steel blue eyes, and, for an instant, her eyes flashed.

“How does it go?” Mina asked. “Oh . . . I remember. She started to sing but it didn’t really sound like words but more like the sound of a ball of herring rising to the surface. Suvi started to sing, too.

Then Rikka, so close to Hank that her breath nearly met Hank’s breath, joined them. The three girls sang together, Hank closed his eyes.

Suvi swam to Hank’s side and Mina dog-paddled up to his back. They joined hands with Rikka. Round and round they went like they used to play washing machine when they were little girls, when they used to play every day down on the dock, when their hands and feet were still webbed with familial syndactyly, before Doc Heggan had convinced their daddy and stepmom, Liv, to clip their delicate skin. “You don’t want to raise ducks,” the doctor had said.

Suvi started to hum. The current pulled around her, spinning them. In the swirl, Rikka’s long hair wrapped around them like a momma otter keeping her pup safe in a patch of bull kelp. Suvi loved the weightlessness, the current keeping her up. She sensed Hank liked it too. Hank kept his eyes closed. The girls sang some more, the notes flooding together into a single note, sounding like a ship’s bell clanking in the rigging.

Suvi unclasped her life jacket and it floated away from their circle. Mina undid her life jacket too. This released something in them. Suvi felt it. The sea flowed through her fingers, where her skin once was. A memory lurked there, a power she couldn’t control. Kind of like when she first started her period. There was a change, a difference.

The life jackets floated nearby. Beside her, Hank sank below the surface. Mina and Rikka sank too. Suvi tucked her head and submerged quite easily. Several feet beneath the surface, herring swam through Rikka’s hair that was splayed out like seaweed. Mina and Rikka’s mouths opened. They sang, the song moving through the water. Hank’s eyes opened wide, his mouth remained closed, his cheeks puffed out. Then he opened his mouth, trying to sing along. Cold harbor water rushed into his lungs. He sank beneath them. Suvi reached for her sisters’ hands and held them tight, spinning around and around, tumbling through green water sliced with gold sunlight, a splay of her sister’s red hair, and silver fish. Flashes from the herring netted the sunlight, reflecting iridescence in the girls’ eyes, now tumbling with colors.

From The Dead Go to Seattle. Used with permission of Red Hen Press. Copyright © 2017 by Vivian Faith Prescott.

Read 10 of the Best Stories Ever Published in Playboy


Boreal BooksDaily FictionExcerptGirls with the Sun in Their EyesThe Dead Go to SeattleVivian Faith Prescott
Share: 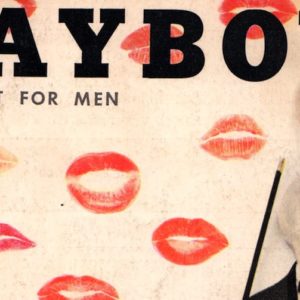 Read 10 of the Best Stories Ever Published in Playboy Hugh Hefner died this week at the age of 91, and if you didn't already have an opinion about him, I'm sure you do now—there...
© LitHub
Back to top