Germaine Greer and the Cusp of
the Feminist Revolution

On the Early Days of the Women's Liberation Movement

It is the morning of April 21st, 1969. In Leamington Spa, England, Germaine Greer is setting down her first thoughts about the book for which she does not yet have a name, but which will make her enduringly rich and famous. Today, she writes, is “the day on which my book begins itself, and Janis Joplin sings at Albert Hall. Yesterday the title was Strumpet Voluntary, what shall it be today?”

In Leamington Spa—as in London, Toronto, Sydney, Auckland, Washington DC—women brought up in the Western tradition are still contented (or miserable) to live the lives of busy domesticity for which society has conditioned them. They have no idea of the extent to which their lives are about to change. Consider, for example, Cheryl Davis, who lives in East Doncaster, Melbourne, Australia.

In Australia it is already evening. As Germaine takes up her pen on the other side of the world, Cheryl is reflecting on the day just past. She has completed all the tasks she set herself. After she drove her children to school, she had gone to Box Hill to choose the material for her new curtains. Then there was the food shopping, cooking, cleaning and getting the house tidy for Jim when he came home.

Cheryl is 30 years old. Born in 1939, she is the same age as Germaine Greer. At 15 she left school, where she had taken the “commercial girls” course, to become a typist and filing clerk in the mailroom of the head office of a large bank in the city. She found the work boring, but enjoyed the company of the other girls and the boys who brought up the heavy bags of mail and prepared the correspondence for the girls to sort. The boys earned more than the girls and nearly all of them suffered from acne. They laughed and joked a lot, but they knew they would be bank managers one day if they could earn the approval of the men who supervised their work. Cheryl, over the filing, thought only of Jim, who would become her fiancé, and how she would spend her next pay on items for her glory box.

Cheryl is very pretty—dark haired, green eyed. She is intelligent, too, but she does not yet know it. Germaine’s book will change that. Jim, whom Cheryl married when she was 20 and he 23, is tall and handsome. At 33 he is on his way up, proud of his wife and children, neglecting no opportunity to show them off to the senior management of his firm.

Each morning Jim leaves for work in his company car, a large, late-model Peugeot (his company is French-owned). For Cheryl he has bought an old, second- or third-hand Renault 750. It is not very reliable or even safe, but the children are still small and can all fit quite comfortably in the back.

Cheryl Davis does not know that Germaine Greer is about to write a book about her. Nor does she know that, in 1963, an American woman, herself a wife and mother of three children, had already written a book about her.

As she made the beds, shopped for groceries, matched slipcover material, ate peanut butter sandwiches with her children, chauffeured Cub Scouts and Brownies, lay beside her husband at night—she was afraid to ask even of herself the silent question—”Is this all?”

Betty Friedan’s The Feminine Mystique, which sold three million copies in its first three years of publication, described the situation of millions of middle-class women like Cheryl. Representing their situation as a problem, “the problem that has no name,” Friedan painted a depressing picture of stunted creatures whose sole identity was that of unpaid servant to their families. The problem’s archetype was the American housewife who had dropped out of college to take on the “stifling” role of full-time wife, mother and homemaker. Symptoms of her dilemma included inexplicable fatigue, chronic depression and blisters that broke out over her arms and bled.

Cheryl is very pretty—dark haired, green eyed. She is intelligent, too, but she does not yet know it. Germaine’s book will change that.

Women everywhere wrote to Friedan expressing their gratitude that, at last, someone was aware of their plight. Her book has been credited with sparking off the second wave of feminism.

On December 1st, 1955, after a tiring day at work, a black woman, Rosa Parks, was riding on a racially segregated bus in Montgomery, Alabama, when the driver asked her to give up her seat in the colored section to make room for a white passenger. She refused and was arrested. Her action ignited a long civil rights protest in Montgomery and she was hailed as the mother of the civil rights movement.

In September 1957, nine black students tried to enroll in the all-white high school in Little Rock, Arkansas. They were beaten, abused and spat upon until federal troops were called in to protect them. In 1958, black “sit-ins” happened across the country, as blacks demanded an end to segregated seating in cafes and drugstores.

Then came the Freedom Rides, when activists, black and white, rode on buses through the Deep South to integrate seating on buses and the use of facilities at bus stations. This was a dangerous mission; buses were firebombed and activists were attacked and beaten by angry mobs of white men. In Birmingham, Alabama, an FBI informant reported that the police commissioner Bull Connor gave the Ku Klux Klan 15 minutes to beat up the freedom riders before moving in to “protect” them. One rider was so badly beaten that he needed 50 stitches to his head.

Yet, despite the civil unrest in their country, throughout the 1950s and into the 1960s millions of white families in America continued to relax after their days’ labors to consume doses of popular culture on television. The stories reassured them that the world was not changing as fast as it might seem. In situation comedies like Leave It to Beaver, white families lived in comfortable houses behind white picket fences, pretty mothers worried over nothing more serious than their children’s squabbles and handsome fathers returned home from the office each evening to sort everything out. This was the dream Peggy Greer was pursuing when she persuaded Reg to buy the Cape Cod–style house on Melbourne’s bayside—the dream Germaine so aggressively rejected.

Peggy’s precocious older daughter was not alone in realizing that the old certainties were crumbling. June and Ward Cleaver’s measured efforts to teach their son, “the Beaver,” the values of truth, justice and the American way did not at all gel with the events viewers had just witnessed on the nightly news. How could America be a fair, prosperous society, a model to the world, when so many of its citizens were being beaten and vilified, thrown into jail without just cause?

Then came Vietnam, and the illusions died forever when, for the first time in history, the horrors of war came into families’ living rooms. Even at the beginning, when the media made great efforts to support US involvement, it was impossible to ignore the pictures of villages being destroyed and children being burned to death. Horrified citizens in all Western countries became aware of the massive injustices that were being committed in their name. Outraged that their country was the chief perpetrator of an unjust war abroad and massive racial persecution at home, the youth of America, both black and white, gravitated to the great protest movements that were shaking the world.

None of this was lost on Germaine Greer: increasingly, she was swept up in the excitement and rebelliousness of the times. Like many other activists, she soon became aware of the similarities between discrimination based on color and on gender. Clearly it was a short step from understanding that if black people were being discriminated against because they were black, women were similarly oppressed because they were women.

Rosa Parks’s famous refusal to give up her seat on the bus reminds us that, from the very beginning, women played a pivotal role in the civil rights movements of the 1950s, 60s and 70s. They led and joined the sit-ins, rode on the Freedom Rides and suffered beatings and jail terms. They turned up in their thousands at the Lincoln Memorial to hear Martin Luther King Jr. speak in 1963. Lessons had been learned: the turbulent times provided a ripe context for protest; men in power showed that they would listen and act—however reluctantly, and however contested the field—in response to organized voices of dissent; men and women, black and white, could work together for change.

Like many other activists, she soon became aware of the similarities between discrimination based on color and on gender.

But despite the heroism of Rosa Parks and others like her, many male protestors assumed that women would play only a supporting role in the movements—typing meeting minutes, washing dishes, making the men feel good. Several people spoke along with Martin Luther King outside the Lincoln Memorial at the March on Washington, but not one was female, and that fact was hardly remarked upon. When future Mississippi governor Ross Barnett spoke the infamous words, “The Negro is different because God made him different to punish him,” in 1959, surely some people must have considered the implication for women. Did being different from men mean that women deserved to be punished?

In Washington DC on June 28th, 1966, at a conference on the status of women, 28 women gathered in Betty Friedan’s hotel room to found the National Organization for Women. On a table napkin, Friedan wrote the acronym NOW. She and black activist Pauli Murray then proceeded to draft (also on a table napkin) a statement of purpose that declared:

the time has come to confront, with concrete action, the conditions that now prevent women from enjoying the equality of opportunity and freedom of choice which is their right, as individual Americans, and as human beings.

By the end of the decade a substantial feminist literature was emerging. In the United States, Kate Millett, already battling crippling mental illness, was writing her groundbreaking Sexual Politics, and Gloria Steinem gained national and international fame following the publication of her article “After Black Power, Women’s Liberation.” The media’s appetite was whetted. Women’s liberation was about to become big business. 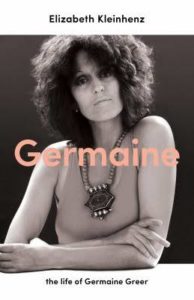 From Germaine: The Life of Germaine Greer by Elizabeth Kleinhenz. Used with permission of Scribe Publications. Copyright 2018

Elizabeth Kleinhenz was born in Melbourne, where she has spent most of her life. She enjoyed a long and distinguished career in the Victorian Education Department as a teacher and administrator of English, History, and German. In 2001, she joined the Australian Council for Educational Research and recently retired from the position of senior research fellow. Elizabeth is the author of A Brimming Cup: the Life of Kathleen Fitzpatrick, which was her PhD thesis.

The Wild Visionary at the Heart
of Early Christianity 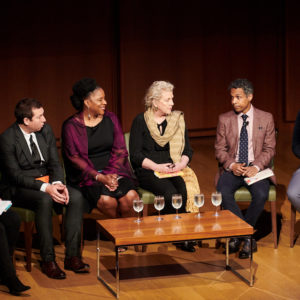 Novels about social issues often have pretty straightforward forms. The Hate U Give, Angie Thomas’s 2017 novel about the killing...
© LitHub
Back to top
Loading Comments...