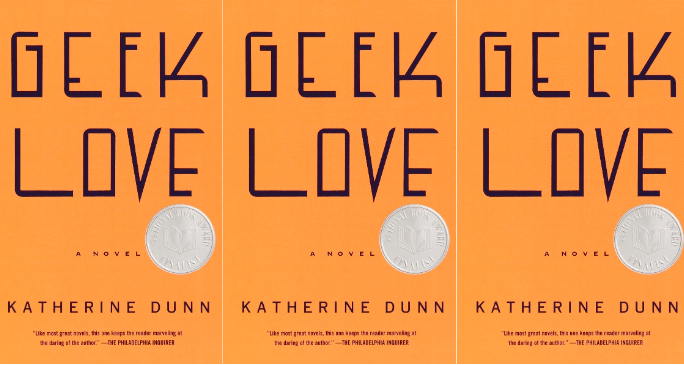 Geek Love is the perfect book to read as a new parent.

In the last days of my pregnancy, I despaired of how long it would be until I could finish a book again. The day my induction was scheduled, I raced through the last 50 pages of The Last Samurai, which I had never gotten around to reading before. Now or never, I thought. (Also: Do I have time to brush up on my Ancient Greek or should I have been reading her Ion in utero?)

When she was born, I learned about the specific chasm of dead time having a newborn opens up. I spent so many hours trying to move as little as possible so as not to disturb the being who was either tentatively attached to me or asleep on my chest or slowly blinking at a lamp, scowling like she already knew she’d been born into the nightmare of the anthropocene. I had a vague feeling I should be focusing all my attention on her—or at the very least not twitch-checking Twitter every 90 seconds out of some hazy fear of Missing Out. The truth, of course, is that it’s boring to focus all your attention on a not-quite-baked baby, no matter how precious she is. But having Twitter open so close to her unfused head felt wrong, too. So I channeled all my energy into one-handed swipe-reading.

The best time to read was the middle of the night. The baby, a novice eater (a novice everything) took her time, and I might be immobilized in the dark for an hour, feeling as if I were the only one in the world who had ever had a baby.

In the earliest nights, all I could read was fluff. As long as the sentences are good enough, I always appreciate a predictable love story, but until the thick fog of new motherhood began to burn off, they were all I could manage. (Everyone ended up together, and some of them even started successful businesses.)

Then one night, slightly less bleary, I needed something substantial, something from my Eventually list. I don’t remember how I landed on Geek Love (it may have had something to do with its availability on my library app). I had started googling whether people had kids, just to reassure myself that Life was still possible. Dunn already had a son by the time she started Geek Love. Once I had made an esteemed novelist’s reproductive choices about me, I could begin.

Geek Love is an easy book to lose yourself in, which is paramount when you’ve just given birth and you are both in pain and painfully aware of your body as a worksite. The situation calls for the sprawling and the bizarre, and Geek Love not only delivers but defines. But beyond its power to captivate was, for me, its power to comfort.

“Comfort” is a strange quality to ascribe to a book about a family (the Binewskis) whose parents chemically engineered birth defects in their brood for maximum “giftedness,” but that’s what I found in the pages of Dunn’s masterpiece. It wasn’t only that reading about matriarch (and storied geek) “Crystal” Lil’s prenatal regimen of radioactive isotopes made me feel better about all the coffee I drank while pregnant. It was the feeling that not-okay is the human condition. It made me feel less alone in my pandemic-compounded new-parent fear. Fear is reasonable—but don’t worry; everything’s going to be not-okay. Love and family are twin nightmares, but they’re also the whole world, so you might as well laugh. (The book is, of course, horribly funny.)

“How deep and sticky is the darkness of childhood, how rigid the blades of infant evil, which is unadulterated, unrestrained by the convenient cushions of age and its civilizing anesthesia,” Geek Love‘s protagonist and narrator Oly—a dwarf with albinism and the least marketably “freakish” of the Binewski family—says. “Grownups can deal with scraped knees, dropped ice-cream cones, and lost dollies, but if they suspected the real reasons we cry they would fling us out of their arms in horrified revulsion.”

Maybe that deeply dark passage shouldn’t have made me feel better, but there’s a certain freedom in such powerlessness. And repeating “rigid blades of infant evil” to myself when the baby wouldn’t stop crying helped a little, too.