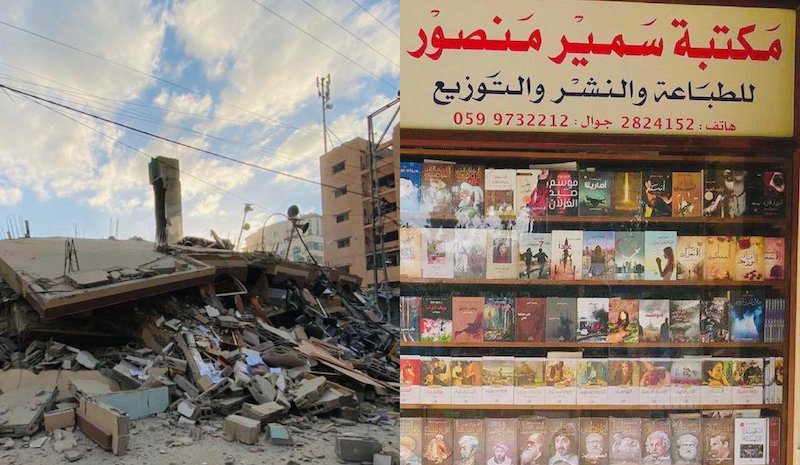 Gaza’s largest bookstore has been destroyed.

The largest bookstore in Gaza, the beloved Samir Mansour Bookshop, was destroyed on Tuesday by an Israeli airstrike. The shop, which was established in 2008, had thousands of books, including the largest collection of English literature in Gaza, and was also part of a publishing house that focused on Palestinian writers.

The Israeli military said that the strike was intended to destroy Hamas tunnels.

“The two-story Samir Mansour book store was built 21 years ago and served as a community centre and book shop for the local Gaza community and Palestinian school children,” write Mahvish Rukhsana and Clive Stafford Smith, two human rights lawyers. “Tens of thousands of books were destroyed. All of the heart, creativity and talent poured into this magical place is gone. As a result of the complete siege on Gaza Strip, construction supplies are in extreme short supply and heavily inflated.”

“The books may be under rubble but that will not stop us,” writer Nada Abu Mideen told The National. “We will keep writing to show the world that we deserve life.”

Rukhsana and Smith have set up a GoFundMe intended to help rebuild the store.

This wasn’t the only bookstore to be destroyed in Gaza this week; “Others, including the Iqraa library, were either completely or partially destroyed in Al Thalatiny Street, lovingly known as al Maktabat street, which literally translates to ‘the bookstores street,'” reports TRTWorld. Middle East Eye has produced this moving video of bookstore owner Shaban Aslim holding back tears as he is interviewed in front of the rubble.

Note: The repeated use of “largest” renders this a little unclear, but this appears to be a different bookstore than Samir Mansour. There is also a GoFundMe for this bookstore.