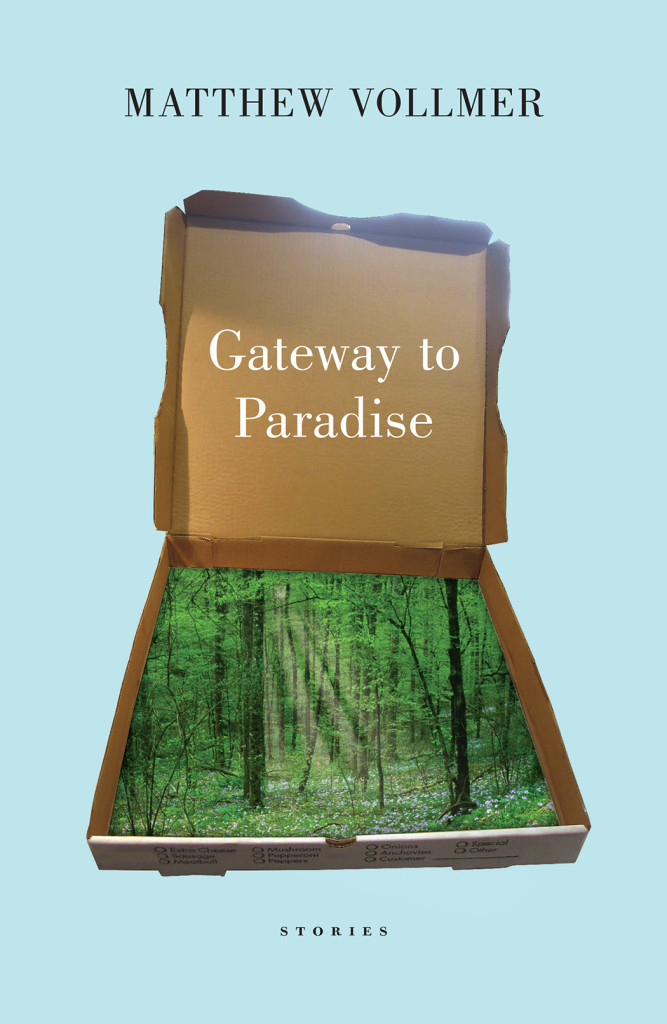 The following is from Matthew Vollmer’s second collection of short fiction, Gateway to Paradise. In the novella-length title-story, a young couple leave an ice-cream sundae melting at a crime scene. An Assistant Professor, he is a member of the MFA Faculty in the English Department at Virginia Tech, where he directs the undergraduate creative writing program.

“I thought he wasn’t supposed to be home,” Jaybird said. He squeezed the steering wheel with both hands and eyeballed the minivan parked in front of a faded pink singlewide. If Gene Holcomb had blown any of his lottery winnings, he’d not spent a dime updating his mode of transportation. The hubcaps on his minivan were gone. The busted passenger-side window had been replaced with a garbage bag. The plastic bulged like a damaged lung taking in air.

“He claimed he had prayer meeting at seven,” Riley replied. When she’d called him the week before, she said she’d like to stop by sometime and, you know, catch up. He’d said that’d be nice, and that she should come any night but Wednesday. Wednesday was his church night.

It was half past seven now. On a Wednesday.

Jaybird directed a drool-string into a Coke bottle. He stomped a pedal to engage the parking brake, killed the engine.

“Guess a man like him can’t be trusted,” he said.

“He’s not all bad,” Riley muttered.

Rain splatted briefly against the windshield, as though something above had spat on them. With a thumb and forefinger, Jaybird squeezed his nostrils shut, then attempted to suck air through his nose, forcing the holes closed. It was something he did now and again. Said it helped him clear his head.

“We could come back later,” Riley suggested. She rubbed her palms on her jeans, fanned air through her shirt. The car’s vents blasted frigid wind. Still, she was sweating.

Jaybird shook his head. “We’ve already gone to all this trouble. I say we go with Plan B.”

Jaw clenched, Riley unbuckled her seat belt. She wasn’t crazy about Plan B. Plan A was non-confrontational, in part because they’d be dealing with an empty trailer. No masks. No weapons. Plan B was a different beast entirely, as evidenced by the firearm that Jaybird had removed from the glove box and now set on the seat between them. A .38 Special.

“What’s there to know?” Jaybird said. He tossed a pair of gardening gloves—the undersides pebbled with tiny rubber circles, to help the wearer better grip his chosen implement—onto Riley’s lap, then stretched a ski mask over his head. “Don’t think about it. Just do like we said. Be a machine.”

It sounded phony. Like something Coach West would say when he wanted to trick her into believing that launching a barrage of threes could reverse a blowout. Only they weren’t here to reduce any deficits; they were here to create one. Riley stuffed her head into the mask. Her face itched. She was hot. She grabbed the handle to open her door, felt her heartbeat in the tips of her fingers.

Uncle Gene wasn’t Riley’s uncle; he was her second cousin once removed, thirty-six years her senior. Years before, Riley’s mother had been hospitalized for a kidney ailment, and Riley had spent a week under the care of Aunt Wanda and Uncle Gene. They’d let Riley skip her bath and use real scissors to cut up the funny pages. They’d let her dip Twinkies in chocolate milk and eat baloney sandwiches on white bread. One night, when Aunt Wanda was popping corn in the kitchen, Uncle Gene asked Riley if she didn’t want a horsey ride. She hopped on his knee; he looped a finger through a belt loop of her jeans. His leg vibrated. Then the tickling began. Only it wasn’t just tickling. It was like some kind of game. He kept asking, “Where’s that ol’ pocketbook?” Riley wanted to tell him she didn’t have a pocketbook but she couldn’t breathe. He’d say, “Is this it?” and jab a finger in her armpit or under her chin. “How about here?” he’d say. “Or here?” Then he said, “I think I found it. Yessiree. I think I found that ol’ pocketbook.” His hand slipped in—and then out of—the front of her underwear. It’d made Riley feel funny, but not bad—at least not until years later, when, during a sleepover, she’d told the story to Amber Pullium who claimed it was the totally grossest thing she’d ever heard. Was it? Riley wondered. She couldn’t even prove it’d happened. Her own mother thought she must’ve been mixed up. Did Riley think her own mother would leave her little girl with people who couldn’t be trusted? Uncle Gene, her mother insisted, had been nothing but nice. And then Aunt Wanda had gone and left him for a retarded boy from Hanging Dog. If anybody deserved to win something, Riley’s mother had said, it was Gene Holcomb.

The handle refused to turn. Jaybird kicked the door twice with the heel of his boot. The aluminum dented and the door swung open. A walleyed Chihuahua-mix ran in circles, yapping. It resembled a toy in the throes of malfunction.

Uncle Gene, wearing skivvies and an unsnapped cowboy shirt, gripped the arms of his recliner as if preparing for liftoff. His nose was threaded with broken blood vessels. Grayish splotches appeared on his forehead. His bare legs looked pathetically skinny, sprigs of hair appearing around his kneecaps like little strings of plant life.

Uncle Gene obeyed. A stainless steel mixing bowl rested on his lap. Inside: a fresh hot fudge sundae, complete with a mountain of Reddiwip and a maraschino cherry. The whipped cream shivered. The room flickered with light. A TV displayed a white-haired woman smiling serenely while riding a bicycle. A voiceover listed the side effects of a mood-altering pharmaceutical, the majority of which were drowned out by Uncle Gene’s yapping dog.

There was no doubt that Riley had the steadier hand. Whenever they tied empty gallon milk jugs to tree limbs behind Jaybird’s house and took turns shooting, she outperformed him every time; after finishing her rounds, every container would be swaying. But she’d made it clear that she wouldn’t point a gun at anybody, especially one that Jaybird insisted stay loaded. There was no way to know what they might be walking into, he’d said.

Riley’s job, then, was to locate the lottery money. If she couldn’t find it within ten minutes, they’d split. In situations like this, Jaybird had claimed, it was best not to linger. At least, that was his sense of it, and Riley had deferred to his intuition. Aside from snitching the occasional grape in the grocery store, she’d never stolen anything, though, on several occasions, she’d inadvertently served as accessory, having accompanied Tyra Needles—a girl who’d since been saved at Grace Baptist—when she’d exited Walmart with an armful of five-dollar DVDs, and had been rolling in the same girl’s Pathfinder when she’d peeled rubber out of an Amoco station without paying for gas.

Riley and Jaybird had agreed there was no need to tear the place apart. With this in mind, she removed—then replaced—Uncle Gene’s couch cushions one at a time. She found popcorn shards, a few pennies, a pencil worn down to its nub, and a plastic steak that wheezed when she squeezed it. She tossed the steak at the dog, who yelped, jumped backwards, then cautiously approached it, sniffing.

“Are you fucking crazy!” Jaybird cocked the gun. “Flinch and I’ll blast your lungs out!”

“Jesus,” Riley whispered. “Shut up!” Jaybird yelled. He pointed a finger at Riley. Riley wasn’t supposed to talk, on the off chance that Uncle Gene might recognize her voice. She raised her hands apologetically. The phrase my bad entered her head—one that she’d used in high school, when setting an ineffective screen for a pick and roll. But it wasn’t really her bad. She’d only whispered. She didn’t deserve to be yelled at, and there was no point in scaring Uncle Gene. There had been nothing in Plan B about acting like an asshole, or even pretending to act like an asshole. She flipped open her phone. Three and a half minutes had elapsed.

In another life—one she sometimes allowed herself to imagine—Riley had kept playing basketball. She’d said yes to a scholarship at Western. She’d stuffed her clothes into trash bags, packed a laundry basket with shoes and sheets and a desk lamp and a clock radio, driven herself to school in her mom’s muffler-less hatchback. She’d roomed with one of her former teammates—a black girl who was six and a half feet tall. The whole team wore matching metallic purple warm-up suits that swished when they walked. There’d been 5 a.m. workouts, weights to lift, suicides to run. She’d gone to parties; she’d danced to the music of foul-mouthed R&B singers. She’d slept on buses, eaten chicken breasts and mashed potatoes in vast dining halls. She’d run the offense, made buzzer beating threes. She’d juked a UConn player so hard that the player had injured herself. She’d had her nose busted. Her ankle taped. She’d set a school record for career assists. Given post-game interviews. Posed beside giant cardboard checks. Autographed shoes.

But Riley had not said yes to basketball. After a decade of playing on Midget and Mite and Junior Varsity and Varsity teams, she’d said no. No to practices, to crunches, laps and free throws, and lonely hours shooting threes. More importantly, she’d also said no to school. It wasn’t like she had a special zeal for cashiering or the shameless parade of humanity her register attracted on a daily basis, but at least she didn’t have homework. When she was done working she was done for the day. Someday, she’d find a job that would let her labor behind the scenes: a personal assistant, a chef, a housekeeper, whatever. She needed only to never wear makeup or heels. Clothing-wise she preferred hoodies and jeans, bright high tops. Hair ponytailed or—someday, if she ever had the guts to cut it—short like a boy’s, with bangs and a fade in back that, when she rubbed it, would feel like the soft bristles of a clean paintbrush.

From GATEWAY TO PARADISE. Used with permission from Persea Books. Copyright © 2015 by Matthew Vollmer.

Interview with a Bookstore: Brookline Booksmith 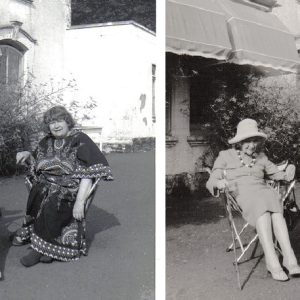 LitHub Daily: August 24, 2015 Jill Bialosky on wearing two hats: what it’s like to be both an editor and a writer. | Literary Hub Jonathan...
© LitHub
Back to top