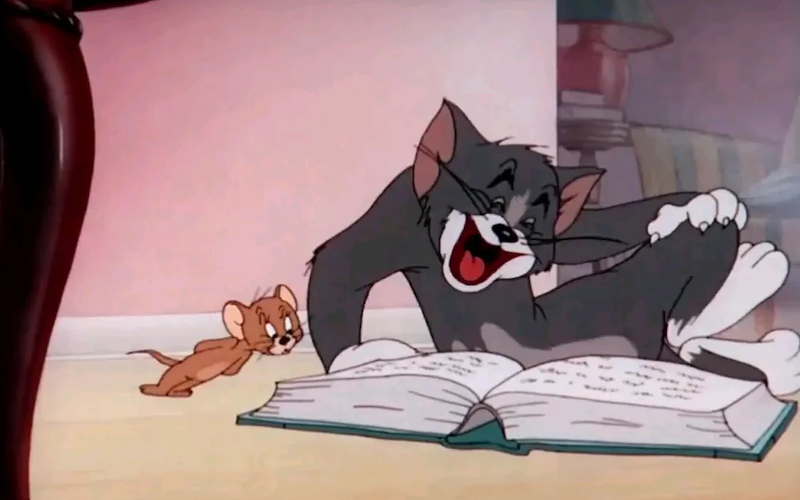 Dennard Dayle on the Books That Embrace “Maniacal Laughter”

Be more like Nero. Not reality’s dull politician, but his enemies’ fiddle-playing caricature. He embodied joyful sanity in the midst of the opposite. The grinning avatar of comedy.

I named my book’s most determined survivor after him because I think humor keeps us alive. You seem decent, so I’d like to suggest a few books with a sense of humor about life’s worst tricks. Some of the strife’s external, like that war in the 1940’s. Others focus on internal problems, like the gnawing need for success we teach children that smile too often. Most multi-task. Either way, they’re valuable for surviving late Americana.

I suspect you could use the laugh. America’s approaching imperial decline with the same verve as expansion, ethnic cleansing, and synthetic sugar. Maybe more. While manifest destiny relied on human competence and depravity, the well-meaning incompetence behind decline is as endless as the sky. Leaving observers a choice between ignorance, madness, and entertainment.

I suggest having fun with it. You can’t control decline, unless you’re reading this from the Illuminati break room or Joe Manchin’s desk. But you can control your experience. Laughing in absurdity’s face is a skill, and I have twelve textbooks for you. Consider this reading list a first-aid kit for your smile.

Embrace maniacal laughter. While gallows humor won’t save the future, it might save you. 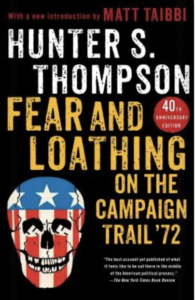 If you listen closely to the wailing and gnashing of teeth, you’ll hear a lot of “Why?” and “How?” and “Could someone in fashionable sunglasses explain this?” Here’s a decent overview. Fear and Loathing on the Campaign Trail ’72 tracks one alcoholic’s journey through an election year. The more mordant insight Hunter S. Thompson provides into how American politics work, the more you learn about why it doesn’t.

Granted, it’s been some time. We have new names, faces, and technology, all of which have changed exactly nothing. A more enterprising and less copyright-averse soul could insert modern names and call it fresh work. This book is an indispensable guide to skipping all the steps between denial and acceptance.

Some would prefer Fear and Loathing in Las Vegas in this slot. I suggest simply doing the drugs yourself. 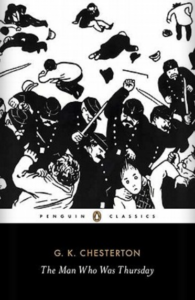 G. K. Chesterton, The Man Who Was Thursday
(Penguin Group)

Extremes are back in vogue. For one golden moment, any political identification with a dash mark got you shadowbanned from serious society. That’s over. Now we have a delightful wave of monarchist-libertarians giving political scientists coronaries. With the complexity of current reactionaries, it’s easy to forget the elegant simplicity of the anarchist. The star of the original mass panic.

Here’s a reminder. The Man Who Was Thursday is many things. Dazzlingly written. A trailblazer for spy narratives. A satire I steal from regularly. But it’s also a passive-aggressive love letter to anarchists. People that stand against the structure itself. If there’s a part of you, however small that sympathizes with that, you’ll appreciate where the book lands.

It does take place in a violent world where nothing makes sense, so you might have trouble relating. But look past that, and you’ll find a new way to laugh. 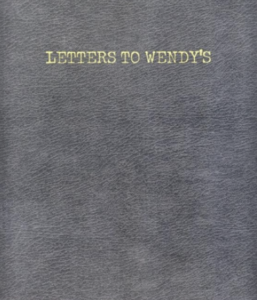 What’s your closest relationship with a corporation? You have at least one. All your food comes from three companies. Disney’s trademarked the human imagination. If you’re right of Mitt Romney, Sinclair wrote your brain’s first draft.

For Letters to Wendy’s narrator, love is red hair and a Frosty. At first glance the book is the deranged ranting of a lunatic. But that’s by artful design from Joe Wenderoth, who depicts the specific aphasia that leads to using a burger chain’s suggestion box. The weirdness has a control and voice that makes almost every page hilarious.

Even the titular brand can’t ruin my soft spot for this book. After convincing every salmonella shop in America to adopt a zany online persona, not acknowledging this book remains the Wendy’s Twitter account’s greatest sin. Yes, even after the rap album. 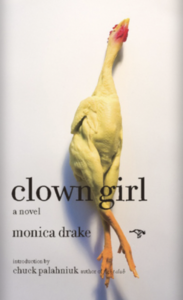 Perhaps all this is too grand in scope. Maybe you want something about how your life, on the ground, feels like a bad joke. For a good time, I suggest Clown Girl, the story of a depressed clown in a codependency spiral. I don’t mean a figurative clown, or the idealized cartoon free from rent payments and chemical habits. This is the simple story of someone chasing art and love past the point of physical, mental, or financial health. For my money, black comedy gold. 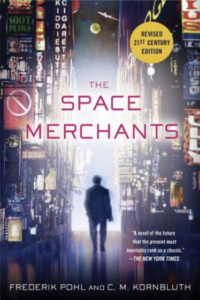 Once, I thought saying “we’re a year out from ads on Mount Rushmore” was clever. Then my sister noted that Mount Rushmore is the ad. Since that day, ten or so years ago, I’ve lived in fear that the wrong sibling got into comedy.

Then again, I didn’t start out in comedy. There aren’t many book deals at undergraduate career fairs. I spent half a decade in public relations and advertising, where I learned that the sleazy caricatures of excess in media depicting advertising were complete bulltruth. There are aspiring Drapers in every agency. In fact, there are sociopaths that chose advertising because of Mad Men.

Of course, that’s just our generation. One of the earliest, and best, depictions of advertising hammering our minds into a slick paste is The Space Merchants. This 1950’s sci-fi novel depicts an insane world where advertising holds 85% of its current power. It’s likely the most amusing picture of war between mega-corporations, even after Amazon’s hostile takeover of Human Dignity LLC.

The next time an ad tempts you to use your laptop as a frisbee, consider The Space Merchants. It might be a campaign to sell more laptops. 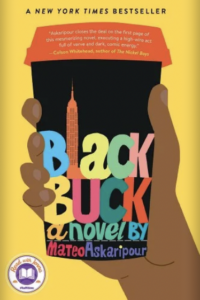 Of course, 1950’s ad culture is a little retro for some. Feel free to cut it with some 2021 sales culture. Black Buck is Mateo Askaripour shaking Horatio Alger to death for poisoning our national brain. The original American deal sucks, and the black version is worse. It’s life on the lower decks of a sinking ship.

Think a business manual, with all the sociopathy dialed up five percent. Considering all the “hustle over the broken bodies of the fallen” rhetoric in the average self-help book, that’s an impressive number. Read it, and become the loudmouth laughing on the morning train. If anyone confronts you, it’s a sales opening. 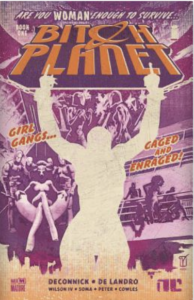 Some entries on this list are subtle. Bitch Planet, less so. This graphic novel riff on exploitation films depicts The Auxiliary Compliance Outpost, a women’s prison in a patriarchal future next door to The Handmaid’s Tale. If Intercourse or 13TH didn’t have enough space stations, hyperviolence, or life-or-death football games for your taste, you’ll get something out of Bitch Planet. 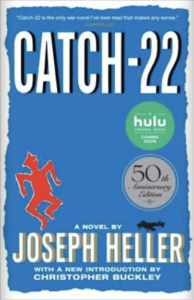 Can’t tell if it’s the world or you that’s gone mad? Good news: it’s both. Joseph Heller became the Golden Buddha Statue of American satire with this portrait of troops resisting, obeying, ignoring, exploiting, and dying for an insane military machine. From a front-row view of hell itself, Heller recognized the war was very, very funny. We can only pray that World War III provides equal amusement.

Wait, is that my job? Too much pressure. I’ll write for the twelve people left after World War IV. 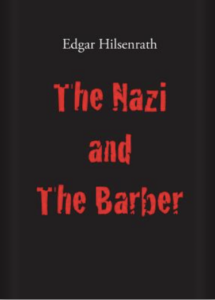 Edgar Hilsenrath, The Nazi and the Barber
(Owl of Minerva Press)

There’s an eternal debate on humor’s limits. Here’s a pitch-black satire by a Holocaust survivor about a concentration camp guard disguising himself as a victim. And it’s brilliant from the first page to the last. If Edgar Hilsenrath can distill black tar laughter out of the worst tragedy on this side of the Bronze Age collapse, we can survive a rib at the Comedy Cellar.

There are attempts at the grotesque, and then there’s The Nazi and the Barber. The English book’s a pain to find, but if the last few copies sell out it may provoke a reprint. Wink wink, nudge nudge. 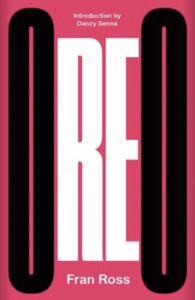 At some point, the hazard suit-wearing aliens picking through the ashes of Disneyland will wonder why we couldn’t figure the whole race thing out. Oreo is a personal favorite novel about that very question, retracing the myth of Theseus through a half-black, half-jewish child’s search for her father amidst all the “Sam Schwartzes” in the phone book. It also boasts my favorite format-bending inserts this side of Chris Ware.

Fran Ross owned one of the nimblest comic voices I’ve seen in print, and I usually avoid throwing “nimble” around. It tends to be clunky, unlike the word clunky. Ross’s nimbleness makes clunky look like nimble. 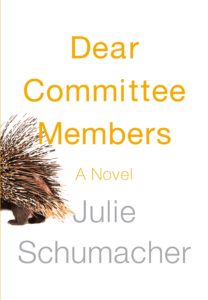 I’ve got a lot of bombs, megacorporations, and what America calls race relations on this list. But looking around, I’ve noticed that some of you look fried. Your mental bandwidth struggles with all the new genres of fraud and terrorism, and you could use something digestible. I’ve got you.

One of the speediest and smartest satires I’ve read is Dear Committee Members, a novel composed of recommendation letters. Few devices paint the collision between fragile ideals and smile-shredding hyper-capitalist reality smo easily. It’s the only campus novel I can write about without nodding off, and captures feeling like the only sane person left alive. Which, as the gyre widens, will soon be reality for one lucky citizen. Here’s hoping the scenario’s more “one-eyed king” and less “burn the witch.”

For everyone else left in the asylum, Everything Abridged also features a slick satirical frame, and is available at—wait, right, forgot one: 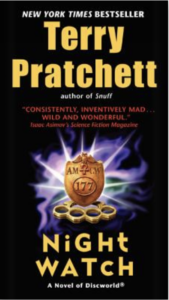 Terry Pratchett published more books than most of us bother to read, but choosing one was easy. Night Watch underlines the circular nature of revolutions (and delivers the pun more nimbly/clunkily) with relentless humor and imagination. It shadows Les Miserables to paint a picture of discontent, collapse, and futility. Paired with nobility, perseverance, and a thin trickle of justice. Yes, the last entry in my nihilist carnival is ultimately optimistic. And now, so is this list. You still have to vote, nerds. They can’t kill all of us. 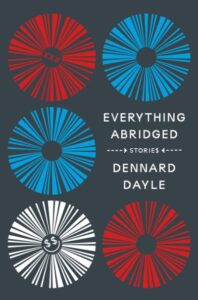 Everything Abridged: Stories by Dennard Dayle is available via Overlook Press.

Dennard Dayle is a Jamaican-American writer from New York City. He is a graduate of Princeton University and received his MFA from Columbia University. His short fiction has been published by Clarkesworld, Matchbook, the Hard Times, and McSweeney's Internet Tendency. Everything Abridged is his debut collection.

Marie Myung-Ok Lee on the Inevitable Slowness of Writing 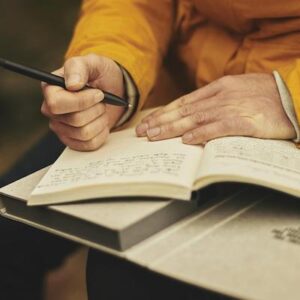 Marie Myung-Ok Lee on the Inevitable Slowness of Writing

Author and activist Marie Myung-Ok Lee is astonishing. In the spring of 2017 I had the incredible luck of sitting across...
© LitHub
Back to top
Loading Comments...