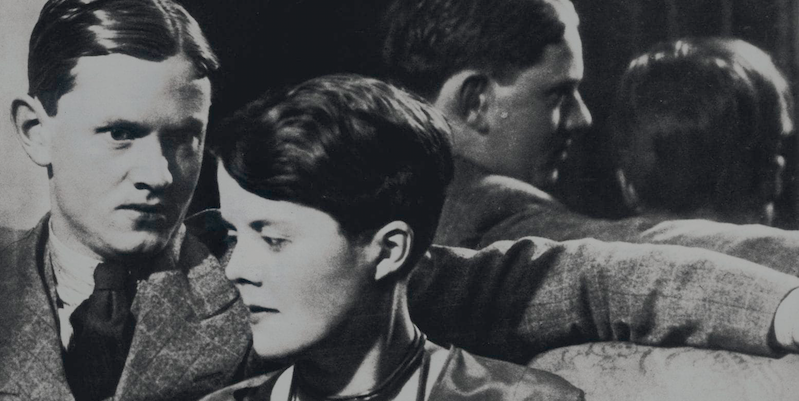 Yes, it’s true: the British author Evelyn Waugh’s first wife was also named Evelyn. (Evelyn Florence Margaret Winifred Gardner, to be precise.) But as you might imagine, if you know anything about the Taylor Swift-Taylor Lautner debacle of 2009, things did not go well for the Evelyns.

The year was 1927, and Waugh, not yet a well-known writer but trying desperately to become one, met the young aristocrat, socialite and Bright Young Thing Evelyn Gardner. They met through Waugh’s brother Alec, who had had been interviewing some of the young people in this famous circle, and was invited to one of their parties afterwards. He brought along his brother.

The Evelyns fell in love and got engaged at once, despite the fact that Waugh had barely any money or status, and that Gardner’s family totally disapproved. She, a twenty-four-year-old, had been engaged nine times before, but with her name-twin, it stuck: they were married in 1928.

Despite the fact that Waugh’s real first name was Arthur, their friends referred to them as “He-Evelyn” and “She-Evelyn.” And when he began to publish novels, starting in 1928 with his satire Decline and Fall, some of the reviewers thought he was a woman in the first place.

As Waugh’s career took off, Gardner’s health declined. When Waugh received an exciting opportunity to write articles about international travel in February 1929 (and the couple was given a free stay on a cruise ship in the Mediterranean so Waugh could accomplish this), she contacted pneumonia and had to transfer to a British Hospital in Port Said, Egypt. She recovered, and they returned to Britain in June, but not long after, Gardner suddenly told Waugh that she had begun an affair, with their mutual friend, John Heygate.

Waugh filed for divorce on 3 September 1929, but the Evelyns didn’t officially split until 1936, because Waugh’s conversion to Catholicism in 1930 made things a bit challenging. But in 1933, he met and fell in love with Laura Herbert, and was determined to at least get an annulment. He did.

And in 1937, Evelyn and Laura married, concluding an episode which completely vindicates those of us who spent eighth grade assuming Evelyn Waugh was a woman.