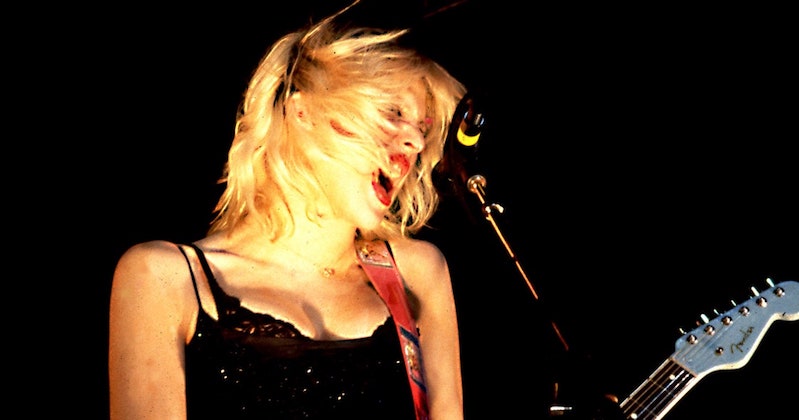 Here’s something weird and wonderful from way back when: alt-rock icon, occasional indie movie actress, and Hole frontwoman Courtney Love, at the tender age of eleven, tried out for a role on the on the 1977 Mickey Mouse Club—the second incarnation of Disney’s beloved children’s variety television show.

If you’re thinking to yourself, Courtney Love, at any age, seems like she’d be an odd fit for a cheery, sanitized, kids TV show, well, you would be extremely correct. How do I know this? Well, according to this 2006 interview, the then-preteen Love chose a rather unusual piece to perform at her Disney audition: Sylvia Plath’s “Daddy.”

Tragically, there doesn’t seem to be a video of this audition anywhere online, but I can only assume it went a little something like this: wee tiny Courtney, forced to don polished lacquer shoes and itchy church clothes for the occasion, waits (sullenly, but patiently) in the corner of a large hall as child after precocious child tap dances, sings “The Bare Necessities,” and lisps cutsey responses to softball questions from delighted Disney execs. Eventually, as the sun outside is setting and the execs are packing up to leave, one of them notices the small blonde girl in the corner, clutching a book with the word “Ariel” printed on the cover, still awaiting her turn. “Sorry, honey,” one of the execs exclaims, “we almost forgot about you. Why don’t you bring your little storybook on over here and show us what you got.” Eleven-year-old Courtney approaches the microphone, and begins to read:

Daddy, I have had to kill you.
You died before I had time——
Marble-heavy, a bag full of God,
Ghastly statue with one gray toe
Big as a Frisco seal

The execs have stopped smiling. Two verses in and they’re uneasy. This isn’t from one of ours, right? one of them whispers. Shush, says another, it’s probably an old fairy tale or something. Give her a chance.

I have always been scared of you,
With your Luftwaffe, your gobbledygoo.
And your neat mustache
And your Aryan eye, bright blue.
Panzer-man, panzer-man, O You——

The execs have begun to sweat. One of them rises, starts to speak, thinks the better of it, sits back down, stares at his colleagues in horror. Courtney continues, unfazed.

Not God but a swastika
So black no sky could squeak through.
Every woman adores a Fascist,
The boot in the face, the brute
Brute heart of a brute like you.

Sweetie, please, I think that’s enough. Thank you for coming in but—

But they pulled me out of the sack,
And they stuck me together with glue.
And then I knew what to do.
I made a model of you,
A man in black with a Meinkampf look

Please stop, little girl, the execs scream. Why are you doing this? Walt wasn’t an anti-semite! It was a different time! What are you? The execs wrench the book from her hands, but Courtney knows the words by heart. They run for the exits but the exits have all disappeared. They press their palms to their ears only to find Sylvia’s verses echoing inside their skulls. Somewhere in the distance, a mouse-helmed steamboat plunges over the falls, a sleeping princess expires on a cold stone slab, a maimed Goofy howls his terrible howl. Courtney reads on.

There’s a stake in your fat black heart
And the villagers never liked you.
They are dancing and stamping on you.
They always knew it was you.
Daddy, daddy, you bastard, I’m through.

Not long after this audition, Love received a rejection letter from the Mickey Mouse Club. “I don’t think Disney was ready for me,” she later told The New York Times.