From Weimar to Appalachia, a Syllabus for Our Brush with Fascism

On Hans Fallada and the Little Men of History

When I used to teach German history, there was one book I assigned each semester. It appeared on every syllabus I wrote, because on the week we discussed it, my classroom was transformed into an intellectual wonderland that only exists on the covers of college brochures. I was invisible, my students in rapture, exchanging ideas around the seminar table. Little Man, What Now, Hans Fallada’s 1932 bestseller, distilled a semester’s worth of tedious timelines into the lives of ordinary men and women and the choices they faced, as only literature can. The book, a political fable written in the twilight of the Weimar Republic, follows “little man” Pinneberg and Lämmchen (lambkin), his pregnant girlfriend, as they are plunged into the Great Depression. Broke and depressed, and with society disintegrating around them, Nazism beckons.

Fallada was a literary populist. His characters are lower-middle class everybodies or nobodies: regular men and women whose lives are thrown into disarray by economic forces they can’t control or even comprehend. They are punished by the crises of capitalism and abandoned by the elected officials purporting to serve them. Fallada, like greater writers of his generation, Thomas Mann among them, was a chronicler of middle-class decline, an acute observer of its nuances and implications. Disorder and Early Sorrow, Mann’s 1925 novella, captures the moment when Germany’s intellectual middle class finds itself powerless in a changing world. The events of history—the hyperinflation of 1923, or the Great Depression—are less political turning points than a crushing blow to domestic life. Youthful idealism turns into cynicism and despair. Parents are anxious. Families unravel. You can almost see the storm clouds gathering on the page.

If there is a syllabus this election season, Fallada deserves a place on it. Not because the Republican presidential nominee leaves us grasping for Nazi analogies. As historians have noted, the billionaire-populist-outsider candidate is sui generis, like the election he’s running in. Rather, it’s the social world Fallada conveys in Little Man, What Now, with documentary-like realism, that feels like a warning. Johannes Pinneberg is an average Joe in a downwardly-mobile age. Scrounging to make ends meet, to support Lämmchen and baby, Pinneberg faces petty humiliations and real hardships. When his hustle finally pays off, yielding a job in Berlin, he is fearful, not relieved: “Would it last? No. Of course it wouldn’t last. Then: how long would it last?” Fallada’s characters are the worn faces in an Otto Dix tableau—insecurity is a way of life for them, and politics are useless. “Ministers made speeches,” says the book’s sympathetic narrator, “admonished him to lead a life of self-denial and self-sacrifice, to put his money in the savings bank, to vote for the constitutional parties. Was he not one of these harmless, starving, and now hopeless animals, huddled in the little Tiergarten?”

Hans Fallada was born Rudolf Ditzen in 1893 in Greifswald, a Hanseatic town near the Baltic and home to one of Europe’s oldest universities. Ditzen took his nom de plume from characters in two fairy tales by the Brothers Grimm: “Hans” from the eponymous “Hans in Luck,” and Falada, the talking horse from the “The Goose Girl,” who bears witness to the truth even after his beheading. The son of a judge who rose to Supreme Court prominence, Ditzen rebelled against his bourgeois forebears from an early age—drinking, smoking, and getting into trouble at school. At 16, he suffered traumatic brain injury when he was run over by a horse-cart and kicked in the head by the mare. While recovering, Ditzen became mentally ill. Two years after the accident, he killed a close friend in a duel and attempted suicide. While cycling in and out of asylums, Ditzen developed lifelong addictions to alcohol and painkillers, which landed him in prison on a few occasions. Yet he was able to write prolifically—dozens of novels, poems, and children’s stories, some of which were immensely popular—from the Berlin neighborhoods in which he lived, all of them socialist strongholds, until his death in 1947. His postwar legacy split along the fault lines of a divided Germany. Proletarian leaders in the East celebrated the author for “his contribution to the German humanist tradition,” explains his biographer Jenny Williams, while the West condemned him for capitulating to fascism, having published several books under the Nazis.

Little Man, What Now can be digested in a single sitting, which explains some of its pedagogical appeal. My students actually read the book from start to finish. I’m a few years out of the classroom, but Fallada’s story seems more relevant than ever—a primer for the 2016 election and the populist impulses that have shaped it. In this way, Little Man, What Now resembles another, more recent book whose subject couldn’t be farther from interwar Berlin: J.D. Vance’s Hillbilly Elegy. Vance’s memoir of white working-class Appalachia, a region left behind by the tide of economic change, shares Fallada’s concern with what happens when people are disconnected from the institution of work, and is written with similar affection for them.

Fallada’s vernacular, matter-of-fact and stripped of descriptive embellishment, is universal, like its theme: the modern economy and its discontents. In 1932, Little Man, What Now was serialized in newspapers across Germany, where it became a sensation. The following year, an English translation was a hit with British and American audiences. Universal Pictures adapted it for the screen in 1934. The film, bearing the same title, starred Margaret Sullavan and Douglas Montgomery. Fallada’s Dickensian fable resonated with Depression-era sensibilities, and its narrative style transcended the boundaries of culture and class. While Fallada was writing the book, he praised his contemporary, the Berlin author Ernst Kästner, as “a man who gives tens of thousands of people the courage to keep going in a humane way.” He admired Kästner’s faithful rendering of a slice of daily life: “exact, sober, without any illusions.”

This restraint was the hallmark of the Neue Sachlichkeit, or New Objectivity, the style with which Fallada is often associated. Like Kästner and Alfred Döblin, author of Berlin–Alexanderplatz, the most famous novel of urban life in the Weimar Republic, Fallada held a mirror to social reality, skewering elites and revealing the hypocrisies of the democratic welfare state. These writers, critical and unsentimental, challenged Expressionism, which had been around since the beginning of the century, and its utopian views of the world. Fallada’s cohort produced literature for regular people, just as technology and cheaper printing methods were making books available to them as they had never been before.

Following his death in 1947 in East Berlin, Fallada faded into obscurity. At least until 2009, when Melville House began reissuing his work, introducing Little Man, What Now to a new generation of American readers. Since then, Fallada’s celebrity has soared. His final novel, Every Man Dies Alone, about another “little man” and his wife—Otto and Elise Quangel—quietly resisting the Nazi juggernaut with a subversive postcard campaign, is the basis of the 2016 film Alone in Berlin, featuring Emma Thompson. David Cesarani, a historian of the Holocaust who died last year, denounced the book as the work of an opportunist whose alibi was to write about resistance. It’s true that Fallada’s place in the Third Reich is not easy to pin down; he rotated on and off the Nazi blacklist. And while his work lionizes the courage and humanity of ordinary people, Fallada allowed himself to be used by Joseph Goebbels in the service of Nazi ideals. Another book that has ordinary men as its central conceit, Christopher Browning’s account of the Holocaust on the killing fields of Poland, suggests that little men, for all their powerlessness, can still change the course of history.

We know what future awaits Fallada’s characters. Like any novel set in Germany in 1932, there is a creeping awareness that everyone will be killed or turned into cogs in the machinery of destruction. But it’s impossible to feel anything but sympathy for Pinneberg, the little man eking out a miserable existence, while his hungry family languishes at home. Pinneberg understands his changing place in a changing world as a rupture in time. He mourns the good old days: “Order and cleanliness; they were of the past,” he says. “So too were work and safe substance. And past too were progress and hope.” Pinneberg’s descent into the abyss reads like a parable. This is what happens when the system, with its promises of freedom and opportunity, fails to deliver.

Fallada’s little man becomes a castaway in his own society, unmoored from traditional institutions and lacking his middle-class identity. Spurning party programs left and right, Pinneberg is without an ideological compass or the solidarity of fellow sufferers. Politics are deeply dysfunctional, he believes, and the system is rigged against him. And while anti-Semitism makes a few fleeting appearances in the book—Lämmchen, for one, admits she is “not too keen on the Jews”—the greatest threat to Fallada’s characters, as they see it, is the concentration of privilege and wealth in the hands of the few. “The rich and powerful think ordinary people don’t have the same feelings as they do,” says Lämmchen. Demeaned by elites and ignored by her leaders, it won’t be long before she quits a system that has already failed her.

Daniela Blei is a historian, book editor, and writer. Her essays have appeared in The New Republic, Smithsonian, Foreign Policy, Narratively, and elsewhere. She lives in San Francisco. 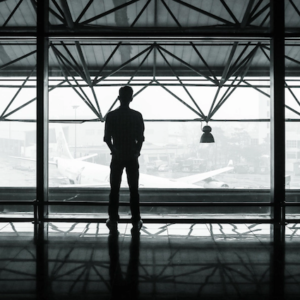 You never know where it will come from—the key that unlocks an idea you’ve been wrestling with for months, or years,...
© LitHub
Back to top