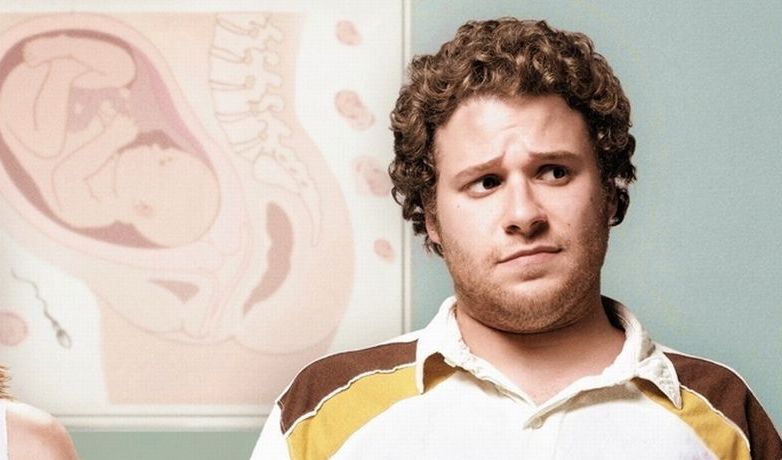 From Orwell to Knocked Up, why are so many abortion stories about… men?

A 2003 cartoon by Gary Cangemi suggests that abortion kills geniuses, geniuses are male, and women are their vessels. In a special issue of his strip Umbert the Unborn entitled “The Greatest Moments in Unborn History,” a fetal Thomas Edison says, “It’s dark in here” and gets his first lightbulb flash of inspiration. A fetal Oceanus Hopkins, the only child born on the Mayflower, wishes that someone would call “Land ho!” Lest Cangemi be accused of only valuing white lives, he throws in a nearly-to-term “Martin Luthor King” (yup, he spelled it wrong), declaring “Next month I’ll be free at last.” Female lives, apparently, aren’t at risk: the only women in the strip are Mother Teresa and an unnamed pregnant woman in a sari.

This is an egregious example of how stories about abortion are often really all about men, but you don’t have to look far to find one. What is the 2007 film Knocked Up, after all, other than a movie that rejects “shmashmortion” without real discussion so that the main character can experience a narrative arc that takes him from disengaged slacker to mature adult who mansplains labor to women experiencing it? The fetus turns out to be female—reaction shots to both a boy and a girl were filmed—allegedly because director Judd Apatow thought Loudon Wainright III’s song “Daughter” fit well in the scene. Perhaps, though, Apatow wanted to allay the criticism that, as the film’s female lead Katherine Heigl put it, that Knocked Up was “a little bit sexist,” portraying “the women as shrews, as humorless and uptight” and “the men as lovable, goofy, fun-loving guys.”

The idea that fatherhood is a good way to turn men into responsible adults, and that abortion threatens that progress, is common: it appears in everything from a 1936 novel by George Orwell, Keep the Aspidistra Flying, in which a struggling writer gives up his art in order to marry his pregnant girlfriend, to the 1966 film Alfie, whose main character realizes the horror of abortion toward the end of the film and is left to wonder “What’s it All About?”

Both conform to another old pattern: making the threatened fetus male, like Cangemi’s Umbert, a contemporary fetus who is usually the subject of his strip. Much like the male fetal protagonist of Ian McEwan’s 2016 novel Nutshell, Umbert speculates about life outside the womb and sometimes blames his (always unseen) mother for bad parenting. The would-be father in Keep the Aspidistra Flying wants to save his unborn child, “a bit of himself,” and Alfie’s lost chance to be a father is compounded when, during the abortion of the most recent woman he made pregnant, he happens to see the last woman he made pregnant; his son with her now has a new dad. In a 1926 poem, “To a Tragic Poetess,” Ernest Hemingway mocked his supposed friend Dorothy Parker for having a “plump ass,” attempting to commit suicide, and ending a pregnancy on purpose. He, too, imagines abortion as the loss of a little man in there: “And were there little feet and had the testicles descended?”

We need to talk more about, and fight harder against, the misogynistic stain of opposition to abortion represented in Cangemi’s cartoon and evinced by many abortion narratives written by men over the last hundred years. They make clear that some men oppose abortion because to them, it represents the death of a potential man whose potential life is more important than any woman’s. It’s not “pro-life”—it’s just pro certain lives. White male lives. Fighting back means exposing misogynistic anti-abortion ideologies as the stupid evils that they are and continuing to insist on the rights of all pregnant people to make their own choices about their own futures.