From Imbibing Spirits to Spiritualist Mediums

Life in the Connecticut Suburbs

My childhood friend has taken up residence in what was once her parents’ summer house in a small community built around a spiritualist campground in Niantic, Connecticut called Pine Cove. The Spiritualist temple—or tabernacle, as my friend calls it—sits on a rise above Smith Cove, a protected body of water that connects to Long Island Sound. The camp flourished in the late 1800s as a summer retreat, its 40 acres divided into 25 by 50 foot lots perfect for campsites. Eventually, Victorian cottages took the place of the tents, though many of them were destroyed in the hurricane of 1938. Today the camp hosts visiting mediums from local Spiritualist churches; its summer schedule is filled with workshops, spirit circles, drum circles, and private consultations (40 dollars for 30 minutes) in the medium’s cottage.

The tabernacle is like an old New England beach casino, its rafters visible above rustic, wood-slatted walls. Wednesday nights are for the spirit message circle held by the visiting medium. The guests grab chairs or cushions to make a large circle. “The latecomers cause a commotion,” my friend says, “as the circle must break and expand to include them. There are no empty chairs. The circle is exactly our size.”

The medium opens the circle with a prayer that establishes a sense of peace and protection and welcomes those who have crossed over. There is no mention of the dead. The first tenet of Spiritualism, according to the National Spiritual Association of Churches, is there is no death and there are no dead.

My childhood friend and I grew up two houses away from each other in a Connecticut suburb. I lived in a white colonial with a cast metal eagle over the garage, potted geraniums, a sweep of perfect lawn and safe patch of backyard woods. We witnessed our parents’ heyday: parties dominated by whiskey sours, sombreros, Bloody Marys; Memorial Day cookouts with cans of beer chilling in tubs of ice; New Year’s Eve hosted at houses cloaked in snow, the downstairs riotous with cutlery, laughter, and smoke. Close friends, our parents met for cocktail hours that often extended beyond their dinner reservations, but they always managed to talk their way to a table. Once, they stole a plaster statue of an old fisherman from a restaurant lobby.

Our fathers became sober together in the 1980s, collecting AA medallions and pulling their lives up from the muck. Still, our history is filled with the giddiness and ravages of their adventures—stories of parties in a neighbor’s house that continued long after the hosts had gone to bed, of singing around open fire pits dug in the lawn for lobster bakes, of squabbles that resulted in wives taking off on foot into snowy nights.

My friend and I grew apart, and my family moved from the neighborhood when I was a teen—an abrupt transition that felt like a death of sorts. I had never imagined living anywhere else. The familiar slate foyer, the pine kitchen cabinets, the closet walls covered in a penciled secret code only my siblings and I could understand—how was it that we might never see this place again? In order to revisit my lost neighborhood, I wrote about it, channeling the sound of the cicadas and our parents’ boisterous chatter late into the night. Through this writing, I reconnected with my childhood friend after many years. She’d moved into the house in Pine Grove to care for her parents. Our recollections of their stories formed a shared library of their carousing, as if through our remembering we could keep it, and them, alive.

Despite my friend’s parents’ ailing health, our families had kept in contact—our mothers through email and letters, our fathers through regular lunches. Each year on the anniversary of my father’s sobriety, his friend sent him his medallion. My friend’s parents have since crossed over, to use the language of the Spiritualists. She occasionally visits the message circles, where the medium, almost always a woman, will explain her process.

“Some want to hear our voices,” my friend says, “and will ask a simple question. Most describe feeling ‘a vibration’ which directs them from guest to guest, and seemingly randomly, the messages begin.” Many descriptions of the environment the medium wants to create involve it being “psychically charged.” Upon leaving our physical bodies, the NSAC explains, we enter another plane of existence. “This plane is similar to our earthly plane but at a higher rate of vibration and luminosity.”

In the Pine Grove message circles, everyone gets a reading, whether there are eight guests or 25. Many mediums say that messages “come through” in symbols, and the medium interprets these for you. One said that when she sees cake, it means a celebration or anniversary. Some describe the spirits coming through in physical terms—body type, hair, or clothing, and this has happened to my friend twice. But more often, they describe figures—male or female—and try to guess a family relation.

Many times, a reading will provide connection, and this is hard to describe. Even when it doesn’t, the reading “resonates, bounces around in your head,” causing one to wonder “who was that, and why,” and my friend feels this is fine, too. She’s witnessed many uncanny moments between spirits and guests. Some mediums, she says, are physical themselves and change the way they stand or modify their voices as they channel the spirits. Once, while her mother was still alive, my friend’s aunt came through with her trademark expression Not to worry. My friend verified this with her mother, and they were both comforted. “It gave me a working title for an unsettled time,” she said. At another circle, a man appeared to the medium in a meadow of tall grass, his arms loaded with daisies. “Flowers of true friendship, not those of a lover,” the medium explained. My friend knew this to be a close friend from college who’d died mysteriously. They used to gather with friends at an old summer house in upstate New York. “Say hello to all the folks,” he said.

On Wednesday nights, the readings continue until everyone has been addressed, and all of the guests are asked to stay until the circle is completed. This can take two hours or more. By then, it is night, and in late August, the cool air signals summer’s end. One evening, she tells me about a group of women, “a cocktail or two under their belts,” who had tricked one in their group celebrating her birthday into attending, and as clearly as I might with the medium’s intercession, I see our parents out on a summer night. I smell the smoke of their cigarettes, hear the slap of our mothers’ sandals on the tarred road. They are on the crest of the hill, lit up beneath the moon—my mother in Lilly Pulitzer, my father in his seersucker sports coat, then gone—her mother’s throaty laugh ringing out, her father breaking into song.

Karen Brown is the author of The Clairvoyants. Her story collection Little Sinners and Other Stories was named a Best Book of 2012 by Publisher’s Weekly; her previous collection, Pins and Needles received AWP’s Grace Paley Prize for Short Fiction; and her first novel, The Longings of Wayward Girls, was published in 2013 by Washington Square Press to rave reviews. Her work has been featured in The PEN/O. Henry Prize Stories, Best American Short Stories, The New York Times, and Good Housekeeping. She teaches creative writing and literature at the University of South Florida. 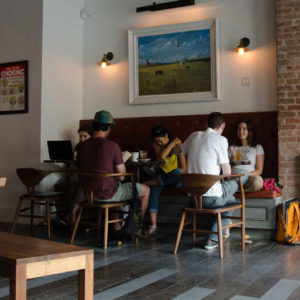 Like any artist in New York City—or anywhere, really—I know never to turn down an opportunity. Say yes. Figure the details...
© LitHub
Back to top