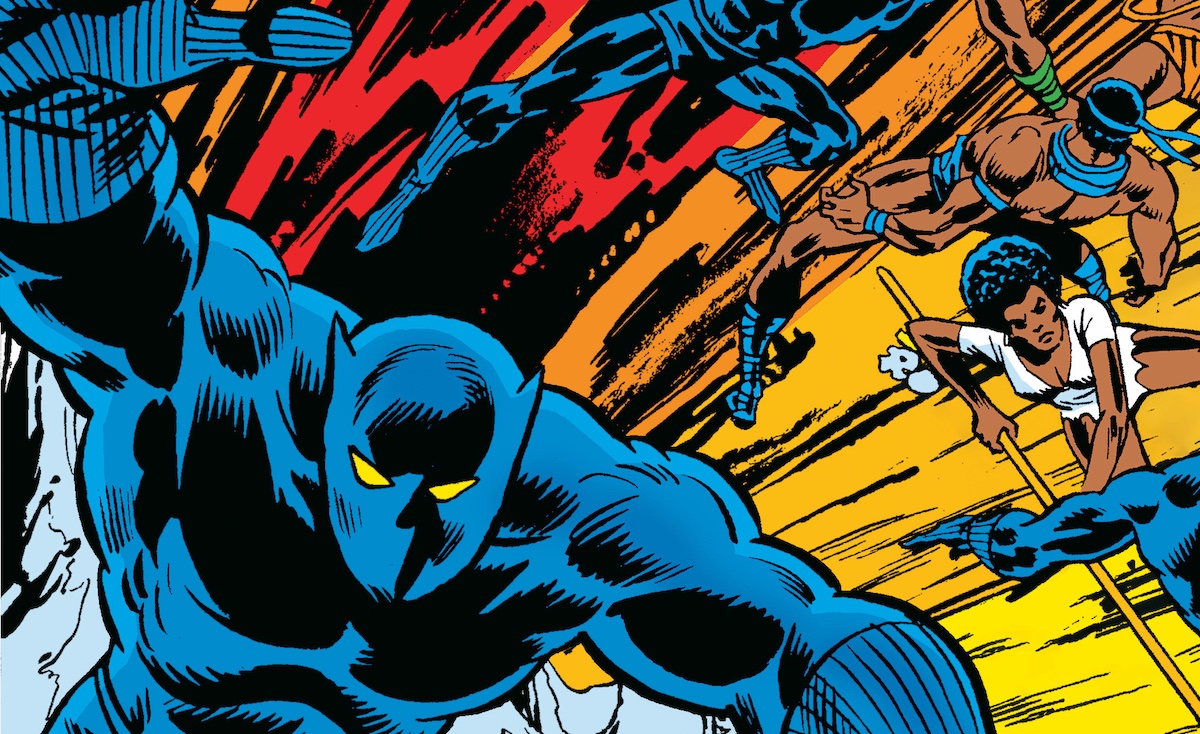 From Garﬁeld to Black Panther: Nnedi Okorafor on the Power of Comics

“My path to writing the big black cat started with a fat orange cat.”

My path to writing the big black cat started with a fat orange cat.

I’ve always been attracted to comics. Even before the word, it was the black line that drew me (pun intended). It began when I was about seven years old in the early ’80s with . . . Garﬁeld. My father was an avid Chicago Sun-Times newspaper reader, and every day he would sit at the dinner table and read it. It was while hanging around him that I noticed that there was a comics page every day. The Family Circus, Hi and Lois, Bloomsbury, Calvin and Hobbes, Momma, Ziggy—there were so many I enjoyed. And, oh man, on Sunday, there were pages of comics, and they were in color! I loved these little stories told in pictures. But I became most obsessed with Garﬁeld.

It was more than the hijinks and jokes. There was something about those dark lines, how they looped and swirled to create images and how those images molded with the “drawings” of letters that were words, communicating thoughts and ideas with the pictures. Even before I was writing stories using prose I was marveling at the dance of symbolic representations of sound and images.

Nevertheless, I didn’t arrive at comic books until much later in life. When I was a kid, I’d see the local comic book shops. I was interested and so, yes, I’d walk in there. I had seen boys at school with comic books and their colorful covers with titles in electrical-looking fonts. The excitement of those boys and their ﬂimsy books intrigued me. And since I was very little, I’d always had dreams of ﬂying. Heroes in capes with super powers were deﬁnitely in my realm of wonder.

However, when I’d push that comic book shop door open, the bell on the top of the door would ring and then something problematic would happen. I’d like to compare it to that moment when Luke and Obi-Wan walk into the bar or that record-scratch moment in Westerns when the stranger walks into the saloon. The comic book shop was always full of white boys; the person behind the counter was always a white guy. None of this bothered me; I’d grown up in a white neighborhood. What bothered me was their reaction to me. The staring, and staring.

The comic book shop was always full of white boys; the person behind the counter was always a white guy.

I’d slowly walk in, trying not to make eye contact with anyone. However, the silent scrutiny and feeling that I had invade a place where I wasn’t welcome would be so strong that I’d leave soon after. On top of this, I was unfamiliar with comic books, how they were shelved, so I didn’t even know what I was seeking. Let alone the fact that when I glanced at all the covers, I didn’t see anyone black or female or outside a male gaze.

It was the late ’80s. I was between eight and twelve years old in those years, the child of Nigerian immigrants, an athlete playing and grandly excelling in the sport of tennis. I was navigating through a lot of blatant racism, prejudice, and xenophobia. I knew when to avoid a space, even if I didn’t fully understand the depth of it. Comic book shops remained an unwelcoming place on several levels for many years. I can’t state it enough: to be white and male was such a privilege if you loved or wanted to love comic books.

My discovery of superheroes didn’t happen until I was nineteen years old and paralyzed from spinal surgery complications when doctors tried to straighten out my acute scoliosis. That’s a lot crammed in one sentence, I know. I wrote a whole book about it called Broken Places & Outer Spaces. I was a semipro tennis player and a track star with severe scoliosis that was increasing in severity every year.

I was eventually told that I could either have the spinal surgery to straighten it out or become crippled by 25 and have a much shorter life due to compressed organs. When I had the surgery, I was in the anomalous 1 percent of patients who mysteriously respond to the surgery with paralysis. So I went from super athlete to paralyzed from the waist down in a matter of nine hours. I’d lost my super powers.

It took me months to regain sensation in my legs (and the doctors didn’t know whether I would until it gradually happened). After a month in the hospital, and then another several weeks of rigorous physical therapy, I got out of that wheelchair and began using a walker. Eventually I graduated to a half walker, then cane, then ﬁnally using only my own two legs. But that summer, while I was still using the walker, I spent a lot of time in front of the TV. And that’s when I discovered the X-Men. I especially loved Storm, who could ﬂy.

But the one who intrigued me most was Wolverine because he was so angry and he had a skeleton that was unbreakable. As a 21-year-old who’d just lost her super powers and was now trying to ﬁgure out who the heck she was, this discovery gave me strength. It was the ﬁrst time I understood why so many loved superheroes. The ﬁrst superhero comic I read was Wolverine.

I went on to consume comics through graphic novels, including Persepolis, A Contract with God, Bone, and two more iconic cat narratives in The Rabbi’s Cat and We3. I read these while I earned my second MA and then PhD. I came to more superheroes through Grant Morrison’s Animal Man and Vixen and Alan Moore’s Watchmen.

And then, years later, while I was a professor at the University at Buffalo, I learned about a country in Marvel’s Africa called Wakanda and I said, “Hmmm, interesting.” I thank Ta-Nehisi Coates for introducing me to King T’Challa. Yes, yes, I was late, but we can’t always be on time.

Even before I was writing stories using prose, I was marveling at the dance of symbolic representations of sound and images.

Writing Black Panther: Long Live the King (2017–2018) was a marvelous experience. Initially, I came to it looking at King T’Challa and the country of Wakanda out of the side of my eye. I’m Igbo (a Nigerian ethnic group), and among the Igbo there’s a common saying, “Igbo enwe eze,” which means, “The Igbo have no king.” Being a series of democratic societies consisting of small independent communities, historically, Igbos didn’t have a centralized government or royalty.

I grew up hearing this phrase, and between this and also being an American, any type of monarchy gets my side-eye of disapproval . . . even a mythical one. Then I realized, in writing Black Panther, I could affect him and his country. I could enter into direct conversation and be heard. It was like visiting a country for the ﬁrst time, and not as a tourist, but as a diplomat. I couldn’t be passive during my visit, and that made my visit even more interesting. I got to listen to, know, and speak to T’Challa and the people and land of Wakanda.

Black Panther and Wakanda hold a powerful place in the Marvel Universe. I’ve always viewed Wakanda as a proper return of African Americans (the direct descendants of enslaved Africans during the Transatlantic Slave Trade) to the continent of Africa. Because one can never go back in the past, the gaze is into the future, and that was where the reconciliation was made . . . at least the beginning of one. There’s a sense of homecoming and belonging in Black Panther that is celebratory. One gets to claim Wakanda as a space and make an African connection.

One of the reasons I agreed to write T’Challa, Shuri, the Dora Milaje, and Wakanda was because I wanted to further develop that bridge. I focused on bringing T’Challa closer to the common people of Wakanda and later, when I wrote Shuri as the Black Panther, bringing her to the rest of Africa.

Comics are powerful indeed. King T’Challa, the mantle of Black Panther, and the country of Wakanda have all evolved so much over the decades. I look forward to what comes next.

Nigerian writer Ben Okri once wrote in his book Birds of Heaven, “The happiness of Africa is in its nostalgia for the future, and its dreams of a golden age.” I think this is true both on the continent and in the Black Diaspora beyond. Wakanda Forever. 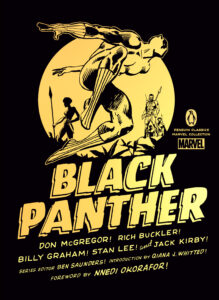 Nnedi Okorafor is a Nigerian-American author of African-based science fiction, fantasy and magical realism for children and adults. Her works include Who Fears Death (currently in development at HBO into a TV series), the Binti novella trilogy, The Book of Phoenix, the Akata books, and Lagoon. She is the winner of Hugo, Nebula, World Fantasy, Locus, and Lodestar Awards, an Eisner Award nominee, and her debut novel Zahrah the Windseeker won the prestigious Wole Soyinka Prize for Literature. Nnedi has also written comics for Marvel, including Black Panther: Long Live the King and Wakanda Forever (featuring the Dora Milaje) and the Shuri series. Her science fiction comic series LaGuardia (from Dark Horse) is an Eisner and Hugo Award nominee and her memoir Broken Places & Outer Spaces is a Locus Award nominee. Nnedi is also creating and co-writing the adaptation of Octavia Butler’s Wild Seed with Viola Davis and Kenyan film director Wanuri Kahiu. Nnedi holds two MAs (literature and journalism) and a PhD (literature). 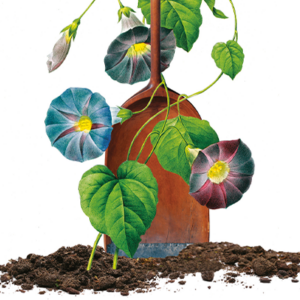 Honestly, even if the rest of your week is terrible, at least today brings us new books from Lisa Taddeo, Ibram X. Kendi,...
© LitHub
Back to top
Loading Comments...