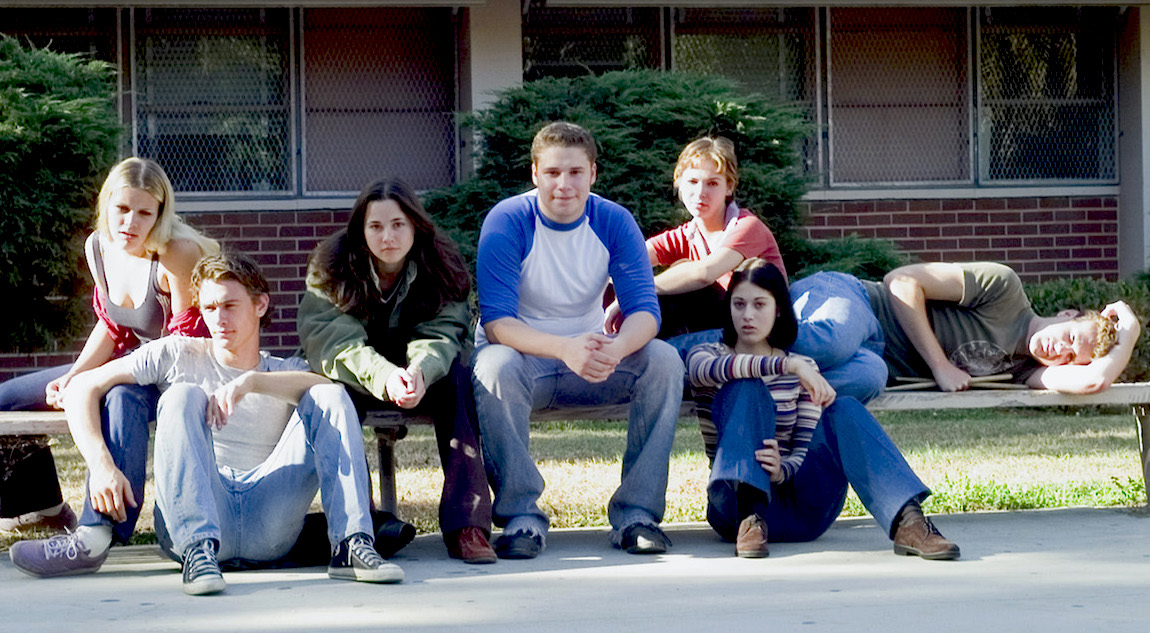 On Freaks and Geeks and Finding My Voice: How Pop Culture Shaped My Poetry

When my mom introduced me to the world of Freaks and Geeks, I was just a kid—maybe seven or eight years old—who had recently become obsessed with rock music, mostly AC/DC and The Rolling Stones, on account of my dad, and Mom saw the show as a good vehicle for passing time on rainy summer afternoons. Mom and Dad owned the show’s original box set from the early 2000s. It was orange, done up like a locker, with the entire cast emblazoned on the front, divided into their respective groups, the “freaks” and the “geeks.” The 18 episodes were cut into six three-episode discs. There was a faux journal with tidbits of every episode stuffed inside the booklet compartment. I studied it like a religious text, memorizing the soundtrack list of each episode, making sure to remember who the guest stars were, idolizing what my parents deemed a good enough part of themselves to give away.

Most of who I am comes from what my parents passed down to me: glam metal, McDonald’s fountain Cokes, baseball, a sex chromosome disorder, Sanford & Son reruns, cursing. My first R-rated movie was 30 minutes of Porky’s and then all of Revenge of the Nerds on the same night when I turned 10. My first concert was a trio show of Def Leppard, Poison, and Cheap Trick in Cleveland the next summer. It was at that show I saw my first set of breasts, on the night Michael Jackson died, and we listened to Thriller on the ride home and didn’t say a word.

When it comes to poetry, I get labeled a “pop culture poet.” I guess it is a fair label, and I guess it is true, but I do resent it. Yes, I make references to certain media staples: rock ‘n’ roll, old films, vintage brand iconography. But, more often than not, I find myself writing against popular culture, punching upwards, grasping at what has been created long before I came along. My first book, The Neon Hollywood Cowboy, is sequenced like a film and deals with a main character, The Neon Hollywood Cowboy, who is an Ohio kid coming to terms with a sex chromosome disorder diagnosis who subsequently comes out as intersex.

Most of who I am comes from what my parents passed down to me: glam metal, McDonald’s fountain Cokes, baseball, a sex chromosome disorder, Sanford & Son reruns, cursing.

I once told a friend of mine that it seems as though almost everything has been canonized in poetry, so there is something, some kind of benchmark, for most poets to measure their own work up against. But for intersex people, intersex poets, specifically, there is no benchmark—and this is where pop culture references become crucial to my work. For so long, I have been trying to make sense of my body, my gender, all of this that has been dropped into my lap, through the lens of whatever popular culture is nearby. Yes, that poem is about Tyler, the Creator’s new song and yes, that poem is also about eating hot dogs with my friends, but that poem is also about feeling safe in this new identity in your hometown. When there is not a canon to pull inspiration from, you have no choice but to create your own.

I was a year old when Freaks and Geeks originally aired on NBC in September 1999. My parents say they watched it every week, and I believe them. When Dad gifted the box set to Mom some years after the finale, it became a haven of nostalgia they often retreated to. Then, it became mine. There were two episodes they never allowed me to watch: “Chokin’ and Tokin’” and “The Little Things.” I knew I was not allowed to watch “Chokin’ and Tokin’” because the main plotline revolved around nerd hero, and total boss, Bill Haverchuck having an allergic reaction to peanuts, and I was deathly allergic to peanuts until I was 11. Mom feared watching the episode would scare the shit out of me, and it makes sense. I’m a worrier.

Later, after watching “The Little Things,” and seeing Amy, main character Ken Miller’s girlfriend, played by the late Jessica Campbell, come out as intersex, I learned why the episode was such an off-limits text in my house. But even then, I still did not fully understand. It seemed underwhelming and weird at the time, to prevent your kid from watching a character say she was born a hermaphrodite—especially since there wasn’t violence inflicted on that character because of it.

Intersexuality, normally, is handled in violent ways by Hollywood. There’s the morphodite joke in Stand By Me, an equally ableist and transphobic joke in the Netflix film Sierra Burgess Is A Loser, and everything surrounding the character of Pat on Saturday Night Live. When Jennifer Lawrence’s nude photos were published online without her consent, she responded, “At least I’m not a hermaphrodite.” On the hit 90s sitcom Friends, in the episode titled “The One With the Rumor,” it’s revealed that Ross Geller and his childhood friend Will (played by Brad Pitt) spread a rumor around their Long Island school district that Rachel Green was born a hermaphrodite. Over two decades later, show creator Marta Kauffman said, “I might not have done the hermaphrodite stuff today if I had that to do over.” Emphasis on “might.”

The world at large—including the world of poetry—has never seemed quite ready for intersex people to be in it, but they are ready to apologize for the ways they have disregarded us, sort of. Even my own mom did not want to expose me to an intersex person’s storyline. We have long existed on two planes at once, fluidly echoing in and out of a body and the sex it presents. And still, everywhere I go, there is a cloud of unwelcome following two steps behind, remnants of a world not yet ready to open up to the thought of me.

For so long, I have been trying to make sense of my body, my gender, all of this that has been dropped into my lap, through the lens of whatever popular culture is nearby.

Freaks and Geeks was different. Judd Apatow and Paul Feig handled the story with as much grace as they could give—but even grace can come with problematic choices. In “The Little Things,” Amy tells Ken she was born with both sets of genitalia. “I had the potential to be male or female,” Amy says. “I was born with both male and female parts. My parents made a decision with the doctors that I should be a girl. I mean, thank god, because that’s who I am, but it’s still a really big part of my life.” But Amy’s intersexuality in the show is only important in the context of the episode’s plot, to give Ken’s narrative arc complexity.

Up until “The Little Things,” Ken was mostly a featured character in the cast, always somewhere in the background, only chiming in when making quick-witted remarks. After Amy’s coming out to Ken, her identity is not the vehicle in the episode, but a passenger, carried along by Ken, Daniel, and Nick as a means of rising conflict between the three men—highlighted by Ken shamefully breaking ethical code by telling Daniel and Nick about Amy’s identity, to which Daniel tells Ken to “get rid of her.”

In poetry, intersex people are not even passengers. On the Poetry Foundation’s website, you can look up keywords that will trigger the site’s search engine to yield results full of poems and poets tagged with those words. When you search “intersex” as a keyword, there are no results. When you search “hermaphrodite,” you get results: a Stanley Moss poem about floral hermaphroditism, a Jennifer Chang poem briefly mentioning the hermaphroditism of slugs, and a handful of poems where hermaphrodites show up only as buzzwords, or, in the case of a stray Dabney Stuart bio, as sideshow characters. No publicly out intersex poet has been a Ruth Lilly & Dorothy Sargent Rosenberg Poetry Fellow. When you google “intersex poetry,” no literary journals appear in the results, though work done by gender and intersex activist Mx. Anunnaki Ray Marquez, Aaron Apps’ memoir, and a poem published by the Intersex Society of North America are the top results. “Best LGTBQIA+ Book Lists” put us in the acronym but not on the lists. The room for intersex art is there, in theory. But intersex artists hold no occupancy in these spaces yet.

On the Poetry Foundation’s website, you can look up keywords that will trigger the site’s search engine to yield results full of poems and poets tagged with those words. When you search “intersex” as a keyword, there are no results.

At the beginning of the pandemic, I found myself rewatching Freaks and Geeks. I used the same box set my family had been using for nearly two decades. I laughed hysterically at Ken Miller saying, “I’ve had my appendix out, so I’ve been there” to Amy after she tells him she is intersex, just as I did before coming out myself. When Sam Weir and Ken cross paths in the boy’s bathroom, and Sam convinces him to not break up with Amy because she thought The Jerk was hysterical, I remember how beautifully simple we all are no matter what bodies we live in. I tearfully cheer every time Ken finds Amy among a swath of marching band members and tells her “I’m sorry. And I don’t care, and I’m so sorry.” He could have ditched her and moved on to someone else, someone without the burden of an uncertain body, but Judd Apatow and Paul Feig made their story end with reconciliation and acceptance, and it couldn’t have been a better coda for their relationship.

Freaks and Geeks taught me how to not be cool and fucking adore yourself for it when poetry could not. The show taught me both that Journey is a great band and that it is also fine to not have it all figured out yet. The show, even during late night Hulu streams 20 years after its cancelation, continues making space for people like me on this planet. When the news broke that Jessica Campbell passed away before this past New Year, at the age of 38, my heart hurt, as if a piece of who I have always been left me.

So now I find myself continuously returning to “The Little Things,” because it is the only poetic text I have for my intersex body where being intersex is not a punchline. Because the poetry world has not categorized or clichéd my identity yet. And, God, being categorized and clichéd is so bad, but, oh, what I would give just to even be that among my writing community peers. Because the first person to give an authentic and beautiful performance in our skin is now gone. Because queer literature foundations are lacking in resources for intersex people on their websites. Because I watch every scene and I see myself. Because then the episode ends with the perfect scenario: a world ready to love our intersex bodies, and ready to finally make some extra room for us. 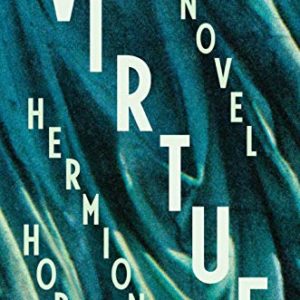 Virtue There’s something kind of gratifying about a really bad birthday. Toward the garish end of 2016, the year our idols died,...
© LitHub
Back to top