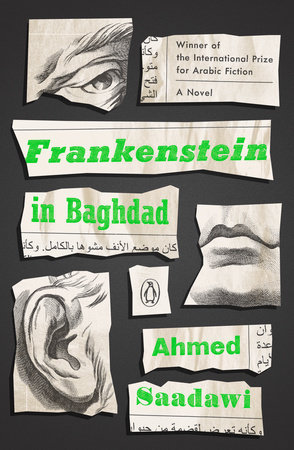 The following is from Ahmed Saadawi'’s novel, Frankenstein in Baghdad. Junk collector Hadi is creating a corpse from body parts he's found around Baghdad; but after an unexpected death, it's the spirit of Hasib Mohamed Jaafar that embodies the assembled corpse. Ahmed Saadawi won the 2014 International Prize for Arabic Fiction for Frankenstein in Baghdad. He is the first Iraqi author to win the prize.

Hasib Mohamed Jaafar was 21 years old, dark, slim, and married to Dua Jabbar. He lived with Dua and their baby daughter, Zahraa, in Sector 44 in Sadr City, in a room in the house of his large family. Hasib, who had been working for seven months as a guard at the Sadeer Novotel hotel, was killed in an explosion caused by a Sudanese suicide bomber driving a dynamite–laden garbage truck stolen from the Baghdad municipality. The bomber was planning to crash through the hotel’s outer gate, drive the truck into the hotel lobby, and detonate the explosives, bringing down the whole building. He failed because the guard bravely fired several rounds at the driver, causing him to detonate the explosives early. The guard’s belongings were handed back to his family: his civilian clothes, a new pair of socks, a bottle of cologne, and the first volume of al–Sayyab’s collected poems. In the coffin they put his burned black shoes; his shredded, bloodstained clothes; and small charred parts of his body.

There was little left of Hasib Mohamed Jaafar; the coffin that was taken to the cemetery in Najaf was more of a token. Hasib’s young wife wrapped her arms around it, wept bitterly, and wailed at length. Hasib’s mother, sisters and brothers, and neigh­bors did the same, and his stunned little daughter was passed from arm to arm whenever the person holding her was over­whelmed by grief.

Exhausted, every member of the family went to sleep dreaming of Hasib walking home with a cloth bag over his shoulder. They all dreamed something about Hasib. Parts of one dream made up for parts missing in another. A little dream filled a gap in a big one, and the threads stitched to­gether to re-create a dream body for Hasib, to go with his soul, which was still hovering over all their heads and seek­ing the rest it could not find. Where was the body to which it should return in order to take its place among those who live in a state oflimbo?

“Hasib was aware of himself observing the explosion… He was looking at the flames, the smoke, and the flying pieces of metal from high in the air. He felt a strange calm.”

When Hasib saw the garbage truck, many possible explanations flooded his mind. It was just a garbage truck. The driver had made a mistake—he had lost control and veered off toward the hotel gate. There had been a traffic accident, and the driver had sped off and was unintentionally heading for the gate. No, it was a suicide bomber. Stop! Stop! One shot, then another. He didn’t mean to kill the driver. He wouldn’t dare kill anyone, but this was his duty. He was well aware of the strict orders about protecting the hotel. There were security companies and important people and maybe Americans in it. He had a license to kill, as they say. The thoughts raced through his head in fractions of a second as his finger squeezed the trigger, maybe even before he had decided on the best course of action. The truck blew up, and Hasib was aware of himself observing the explosion, but not from his position between the wooden sentry box and the big hotel’s outer gate. He was looking at the flames, the smoke, and the flying pieces of metal from high in the air. He felt a strange calm.

He saw a man with a white canvas sack hurtling through the air and landing quite a distance from the explosion. He saw pieces of glass from the hotel windows and the lobby facade flying toward the hotel forecourt. A few moments later the cloud of smoke settled, and half an hour passed before the ambulances and fire trucks arrived.

He watched darkness descend on the city. He saw the distant lights of buildings, houses, and vehicles. He saw some of the nearby flyovers. He saw the floodlights of the sports stadium and some minarets in the distance covered with bright lights.

He could see the river too, deep and black in the darkness. He wanted to touch it. He had never touched the river. He had lived all his life far from it. He had driven over it, seen it from a distance, and seen pictures of it on television. But he had never felt the coldness of the water or tasted it. He saw a man in a white vest and white shorts floating faceup in it. What bliss! He must be looking at the stars, clear in the night sky. He was drifting slowly with the current. Hasib moved toward him and looked into his face. “Why are you looking at me, my son?” the man said. “Go and find out what hap­pened to your body. Don’t stay here.”

He saw another dead body, floating facedown in the wa­ter. It didn’t say anything. It just floated slowly, in silence.

Hasib went back to the hotel gate and looked at the large hole the suicide bomber had made with his truck bomb. He recognized his burned boots but couldn’t find his body. He looked in all the streets and in Firdaus Square, then went to Tahrir Square and saw birds perched on the bronze figures that make up the Liberty Monument. Then it occurred to him to go to the cemetery.

There, in the Valley of Peace in Najaf, he examined all the graves. He didn’t find anything that offered him any cer­tainty, but in the end he saw a teenager in a red T-shirt, with silver bangles on his wrists and a necklace of black fabric. He was sitting cross-legged on a raised grave.

“Why are you here?” the boy asked. “You should stay close to your body.”

“How did it disappear? You have to find it, or some other body, or else things will end badly for you.”

“I don’t know, but it always ends badly that way.”

“This is my grave. My body’s lying underneath. In a few days I won’t be able to get out like this. My body’s decomposing, and I’ll be imprisoned in the grave till the end of time.”

Hasib sat next to him, perplexed. What should he do? No one had told him about these things. What disaster could he expect now?

“Maybe you haven’t really died and you’re dreaming. Or your soul has left your body to go for a stroll and will come back later,” the boy said.

Hasib continued talking to the boy with the silver ban­gles. Every now and then the boy reminded him that he had to get back to his body, because maybe God intended him to have a new life.

“Sometimes the soul leaves the body and you die, but then the Angel of Death changes his mind or corrects the mistake he has made, and the soul goes back inside its body. Then God commands the body to rise from the dead. In other words, the soul is like the fuel in a car. It takes a spark to ignite it.”

They were silent for a while, and then Hasib heard weep­ing in the distance and saw some dogs as black as ink fighting with one another. The boy with the bangles looked at him anxiously. “You better find out where your body’s gone,” he said, “or else things are going to end badly.”

Hasib went back to the hotel and looked up and down all the surrounding streets. After many hours there, he went home and saw everyone sleeping: his wife, his infant daughter, and the rest of the family. Then shortly before dawn he returned to the scene of his death. He felt he was caught in a vicious cycle. In a house in Bataween he saw a naked man asleep. He went up to him and checked to see if he was dead. It wasn’t anyone in particular; the man looked strange and horrible. Seeing the sky changing color, Hasib felt for certain that sunrise would spell disaster for him. He wouldn’t have the energy to roam the streets or go back to the scene of the explosion. With his hand, which was made of primordial matter, he touched the pale, naked body and saw his spirit sink into it. His whole arm sank in, then his head and the rest of his body. Overwhelmed by a heaviness and torpor, he lodged inside the corpse, filling it from head to toe, because probably, he realized then, it didn’t have a soul, while he was a soul without a body.

So things didn’t happen for no reason? The two of them were made for each other. Now he only had to wait for the family of the naked man to take the body to the cemetery, bury it in a grave, and cover it with soil. He didn’t care what name they had inscribed on the gravestone.

From Frankenstein in Baghdad. Used with permission of Penguin Books. Copyright © 2018 by Ahmed Saadawi. 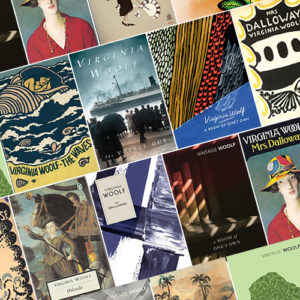 A Brief Visual History of Virginia Woolf's Book Covers Virginia Woolf was born 136 years ago today. It almost seems silly to write that her books are wonderful, or world-changing—but...
© LitHub
Back to top