Read a Story by Jane Ciabattari (And Visit Your Local Store Tomorrow...)

A Book on the Table, featuring flash fiction by Etgar Keret, Celeste Ng, A.M. Homes and others, is just one of the dozen exclusive literary items only available on Bookstore Day. Independent Bookstore Day is a one-day national party that takes place at more than 500 indie bookstores across the country on Saturday, April 28. Join the party and celebrate readers, bookstores, authors and the entire literary ecosystem. Visit www.indiebookstoreday.com to see this year’s exclusive books and literary items and to find the store nearest you. Below is an story from the collection by Lit Hub columnist Jane Ciabattari.

The changes that came overnight were toxic to my system. The new leader made me feel I was being poisoned to the bone. Being near his tower made me faint. Time to go back to Brooklyn. Going back to the place I was born, I believed, I would be safe. I would be with my own.

The first driver was from the Congo. He picked me up to take me over the Brooklyn Bridge the first day of the new regime. I was shell-shocked, in a state of disbelief and terror. The driver made no bones about his antipathy toward the new leader.

“Ah,” the driver said. He mentioned the long-time dictator of his homeland. The billions he had stashed in a Swiss bank account. The jewels, the airplanes, the trips abroad on the Concorde, the glorious costumes, as he robed himself like royalty. The insidious corruption.

“Buck up,” he said as he dropped me off at the furnished room I had sublet. “At least we don’t live in the Congo.”

The second driver was taking me to my doctor a week later for a checkup (if my levels continued to rise I could be a goner). He told me his family was from Yemen. That’s where the servant class for Saudi Arabia came from, he said. His father immigrated forty years ago, the driver was born here, and only recently had he been forced out of the rent-controlled apartment in Park Slope he grew up in. Now he lived in Sunset Park.

“My father was a farmer back in Yemen,” he said. “Eggplant, tomatoes, greens, what you call, all the veggies. Do you know what he did when he had a huge crop?”

“He filled his truck with half the harvest and drove into the city and gave them away.” The driver pulled over to my stop. “Why not share the abundance? That’s how he thought.”

Up the protein, lower the stress, my doctor said. What went into my body and into my mind would become crucial for my survival, she said. I am one of those susceptible to insomnia, panic, night terrors, because of my impaired blinders and my heightened imagination, likely a result of an heirloom gene, a flaw dating back to my Celtic ancestors.

After years without eating meat (not exactly a vegan but close) she told me I had to eat red meat to help me tolerate the stress. Plus beets and wheatgrass juice to bolster my immunity.

A Mexican burger place in Lefferts Garden became my go-to spot: Beet catsup and Chipotle brisket piled on a hand-made corn tortilla. Eat there, take out some to spread over a weekend.

The health food store on Seventh Avenue, in place since the 1970s, had wheatgrass juice at $2 a shot. The first day they didn’t have enough for a full shot. Then I’ll buy half, I said, desperately peeling off a one-dollar bill.

I wanted to survive this time of imbalance. I wanted to believe it could not last. Surely there would be pushback. The new leader could not overwhelm all the laws and legislatures in the land. California was threatening to secede. Something about that helped me move forward. But to do what? My planning mind was frozen. So I played with scale. If I watched on Twitter, on my iPhone, I could reduce the size of the new leader to an inch. Beyond that, I was in panic mode, blood pressure spiking.

I was walking down Flatbush in a bitter wind. The sidewalk to my right was interrupted, the basement level storage next to the Hungry Ghost open, that set of doors to the underworld open wide.

“Oops!” A guy rushing past almost nicked me into that chasm. Turned back, fast.

“Shit, I didn’t see you, I almost.” He stood a minute, looking at me. Worried. Thinking about what almost happened. He could see my body falling down into darkness.  I could tell from his eyes.

We grabbed each other and a third guy on the sidewalk and there was a moment of peace and humility and connection, Brooklyn style. Then off he rushed.

The Great Library of Alexandria

“In New York it’s all about the money,” the driver told me on the way to Greenlight Books. “If you have money, no problem in New York. If you don’t have money, nothing comes easy.”

I nodded, comfortable. The tone of his conversation was like a lullaby.

Then he surprised me. “You’re spending the evening in a bookstore?” he asked, looking at me in the rearview mirror.

“In Alexandria, it’s different. The history. Once we had the oldest library in the world, 3 million maybe 3.5 million books. All open to all the people. Even the strangers.”

He made me think. Millions of books, in one location. At Greenlight, it was more like, what? Thousands? And the place is full of passion and conversation.

“I love Alexandria,” he continued. “The life, the people. You see the water from every place. You just go north and south, the water within view. Not Cairo. Too much people. See, here, I have a video. Waterfront everywhere.”

We parked outside the entrance of Greenlight, in the center of thriving Fort Greene, and he showed me photographs on his iPhone from his visit that summer. Glittering sunlight. I could imagine the millions of books, from centuries ago. Gone. How far away Alexandria seemed. How far he had come.

He showed me the video he had taken walking through Alexandria, and a digital image of a painting of the great library of Alexandria burning. “Some say it was destroyed by fire,” he said. “It could have been budget cuts. Julius Caesar, the Emperor from Rome, cut the money to the scholars.”

I could see my friends gathering inside, some on the stage to read from books they had written, some in the folding chairs to listen. I stayed in the car a while longer, watching his videos, hearing his stories about that great library with millions of books, free for any scholar in the world. And how the Roman emperor brought it down.

Jane Ciabattari is the author of two short story collections: California Tales and Stealing the Fire. She has been honored with three Pushcart Prize special mentions, O.Henry and National Magazine nominations, and an Editors’ Choice Award. She writes the global Between the Lines book column for BBC Culture and a weekly column for Literary Hub. She serves as vice president/online for the National Book Critics Circle, and is a former NBCC president. www.janeciabattari.com

200 Years of Frankenstein On Stage and Onscreen 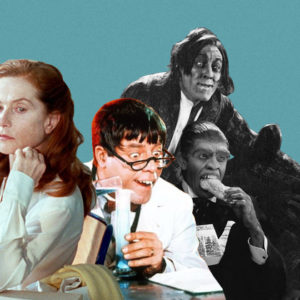 Few books have been adapted so many times, and in so many different ways, as Robert Louis Stevenson’s Strange Case of Dr. Jekyll...
© LitHub
Back to top
Loading Comments...