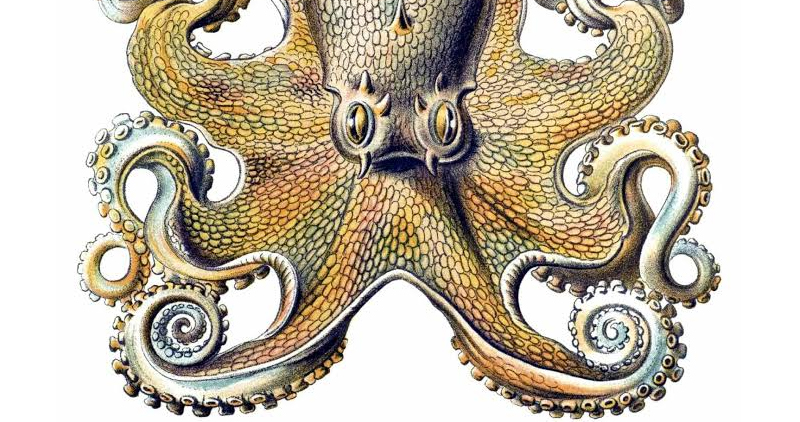 The National Book Critics Circle has announced finalists for this year’s John Leonard Prize for a first book in any genre: Brit Bennett (The Mothers), Emma Cline (The Girls), Nicole Dennis-Benn (Here Comes the Sun), Yaa Gyasi (Homegoing), Nathan Hill (The Nix) and Max Porter (Grief Is the Thing with Feathers). Max Allan Collins and Ellen Hart are named the 2017 Grand Masters of the Mystery Writers of America.  A story collection pulled from a trunk is a revelation; an oral history reveals the sweat behind  “The Daily Show”;  Marcy Dermansky’s third novel sets critics aglow; a philosopher/scuba diver explains the lessons we learn from the octopus brain; and a frenetic dystopian novel perfect for our times. 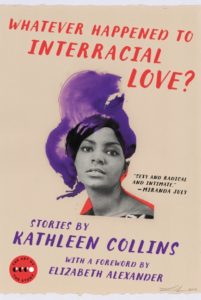 A first story collection from a gifted filmmaker who died at 46 in 1988 (and whose film Losing Ground was revived in 2015) impresses critics.

“Many of the stories that fill…the first collection of her work, were pulled by her daughter from a trunk,” writes Dwight Garner (New York Times). “The best of these stories are a revelation. Ms. Collins had a gift for illuminating what the critic Albert Murray called the ‘black intramural class struggle,’ and two or three of her stories are so sensitive and sharp and political and sexy I suspect they will be widely anthologized.”

“Collins endows her stories with a sense of form that is itself cinematic,” notes Richard Brody (The New Yorker).

Several of the volume’s stories are set in the world of independent filmmaking, offering a glimpse into the personal and professional struggles that she endured as one of the very few black women making movies at that time. Collins, a civil-rights activist in the early nineteen-sixties, delves deep into modern history and personal experience to yield, in calm yet prismatic phrases, urgent and deeply affecting insights into her times, which echo disturbingly today, in light of their long-delayed publication.

Danny King (Village Voice) writes, “Losing Ground fans might be tempted to approach the stories—with their scenes of creative types walking across the Brooklyn Bridge, taking lunches near the Museum of Modern Art, or gossiping about ‘chic openings’ and ‘brittle cocktail parties’—as sketches for urban character studies that Collins never had the chance to realize onscreen. But her writing is so satisfying, so dense with humor and hurt and feeling, that this thought never evolves beyond a passing, fanciful notion. She deploys light as a motif in stories that have nothing to do with moviemaking, using illumination as a barometer of her characters’ psychological states.” 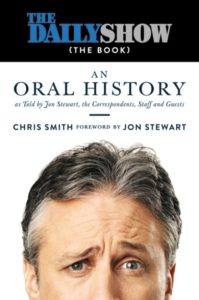 “Chris Smith’s new book about ‘The Daily Show’ in the Jon Stewart years has a theory about the events that let the show find its voice,” writes Janet Malcolm (New York Times).“After Bush vs. Gore in 2000 and just after the 9/11 attacks, real news became so surreal and television news so lathered that a fake news show could find its footing just by playing things relatively straight.”

James Endrst (USA Today) writes, “The Daily Show (The Book) does deftly recount the way Stewart’s sensibilities, political realities (and unrealities), defining events like 9/11, advances in technology and changes in the television news landscape moved the show from spectator to player. And Stewart from ‘a struggling standup comic who was one strike away from getting kicked out of show business to the host of one of the smartest and most satirical shows of the era.’”

The Daily Show (The Book) offers a satisfying highlight reel of the show’s achievements, from segments such as “Mess O’Potamia” and the “Indecision” election coverage to “The Rally to Restore Sanity and/or Fear” and Stewart’s epic jeremiad against Fox News Channel. To the extent that the show altered American politics, the book savors smaller victories, such as Stewart’s persistent lobbying on behalf of 9/11 first responders.

“The Daily Show” under Stewart did what it could to illuminate, to outrage, to point out hypocrisies and, on most nights, to make us laugh in the process. Readers of this compelling history will appreciate the sweat behind every joke. 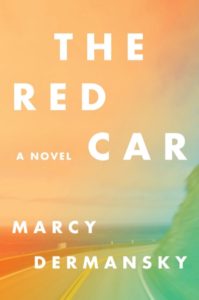 Roxane Gay gives The Red Car five out of five stars on Goodreads; her preview—“The Red Car is taut and smart and strange and sweet and perfect. I want to eat this book or sew it to my skin or something”—sets the tone.

Kirkus Reviews gives it a star:” It’s no accident that Dermansky’s nods to literature and pop culture serve as delightful signposts of surrealism—there are strains of Alice’s Adventures in Wonderland and Haruki Murakami novels, HBO’s Six Feet Under and psychedelic drug use . . . Dermansky delivers a captivating novel about the pursuit of joy that combines dreamlike logic with dark humor, wry observation, and gritty feminism.”

There should be a literary term for a book you can’t stop reading that also makes you stop to think. I slammed down The Red Car, Marcy Dermansky’s sharp and fiery new novel, in tense fits and jumpy starts, putting down the book to ponder it, but not pondering long because I had to know what happened next. The novel’s furious action keeps the pages snapping by, but each incident, at times each sentence, is bubbling with equally furious ideas. “A novel of ideas” is not the term for this—that’s a term for a book that often has big chunks of boring, which The Red Car does not—but neither does it inhabit the term “entertainment,” which assumes a certain shallowness also nowhere to be found.

“This seemingly artless but in fact very controlled novel is on one level, a fairy tale complete with fairy godmother,” writes Marion Winik (Newsday). “and on another, a whispered goad to the reader: Live the life you really want.”

Claire Cameron (The Millions) concludes, “One reading of The Red Car should do, but the relationship could be more permanent. You may want to follow Roxane Gay’s impulse and eat a few pages. They will become a wet wad in your stomach and some of the ink will leech into your blood stream. The Red Car will become part of you. And you will feel less alone.” 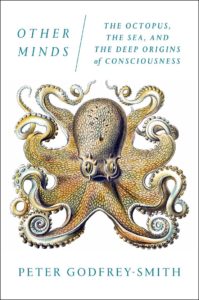 The CUNY philosopher and sometime scuba diver tracks what we have in common with our animal brethren, including the octopus and the baboon, to wonderful effect.

Godfrey-Smith, writes Meehan Crist (Los Angeles Times), “is well-versed in writing accessible entry points to complex ideas in philosophy and biology. Here, he delivers philosophy wrapped even more firmly in the glittering cloak of popular science. The result is an incredibly insightful and enjoyable book that draws on thinkers like Hume, John Dewey and the lesser-known Soviet-era psychologist Lev Vygotsky, as well as research from the fossil record, evolutionary biology and a wide range of animal cognition studies without ever falling into some of the more lamentable pitfalls of the popular science genre—condescending to the reader or oversimplifying the science.”

Irene Wanner (Seattle Times) writes, “Godfrey-Smith discusses the mysteries of changing color, cognitive evolution and communication. He wonders how language evolved. Why is there such sophisticated talk among creatures not noted for sociable natures? He compares complex baboon behavior, which he says relies on only a few sounds, with octopuses, whose skin color patterns seem peculiarly elaborate for animals with a mere two-year life span. At times, the science of this book is daunting, but its study subject is so amazing, it’s hard not to be drawn along, just as Godfrey-Smith was when he extended a hand to an octopus and it reached out to return his touch.”

Colin McGinn (Wall Street Journal) calls Other Minds “ a smoothly written and captivating account of the octopus and its brethren, as observed by humans,” and adds, “He celebrates the cephalopods: the octopus, the squid and the cuttlefish. He stresses their dissimilarity to us and other mammals, but he also wants us to appreciate what we have in common. Just as eyes have evolved independently in many lineages, so have intelligent minds. From those mindless worms, via two separate evolutionary paths, to the glories of consciousness and curiosity—we are brothers in big brains.” 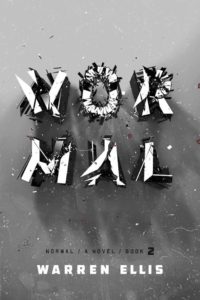 The digital dystopia Ellis creates in Normal, serialized in WIRED this summer, is eerily prescient. The consensus: worth unplugging long enough to read it.

Alex Good (Toronto Star) sets it up: “Spending a lot of time thinking about the future can be depressing, especially if it’s your job. The strain might even lead to a breakdown, followed by a stay at the Normal Head Institute in Oregon, an off-the-grid and into-the-woods asylum for strategic forecasters and foresight strategists. Looking into the abyss of what’s to come, these people have been granted an excremental vision of the future. Everything is going to pot, and the Surveillance Singularity, the apotheosis of techno-paranoia, is breathing down humanity’s neck.”

Ellis, writes Mark Athitakis (Los Angeles Times), “has a knack for taut, fast, cliffhanger-driven installment writing. To that end, the closing pages of Normal have both the propulsive power of any solid thriller and the kind of social awareness Dickens might appreciate, even if he couldn’t have imagined psy-ops and the Internet of things.”

“This is Warren Ellis at his most darkly hilarious and most acerbic,” concludes Cory Doctorow (Boing Boing).  “If you loved Transmetropolitan, laughed at Crooked Little Vein, and were terrified by Gun Machine, this one will please and scare you.” 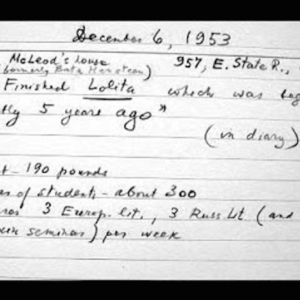 Edmund Wilson hated the first draft of Lolita so much he couldn’t finish it, and told his friend Vladimir just that. |...
© LitHub
Back to top
Loading Comments...