It started in Target. Nina was there with her two little boys. I was there with my husband and our newborn. I knew her from graduate school, but not very well—we had hung in and around the edges of the same group of friends for several years, but she and I had never really talked one-on-one. My husband and I were maybe three weeks into the delirium of new parenthood. Nina seemed to really mean it when she said, “I know how you feel.”

Soon, she and I were emailing about new-mom stuff—nursing, projectile spit-up, all of it. Then one day a grocery sack with hand-me-down baby clothes appeared on our front porch. A month later we had her and her husband, John, over for take-out. We sat at our kitchen table, laughing and laughing.

After they left, my husband and I were flush with first-date excitement. “I like them so much,” I said.

We didn’t. It was fast and deep, our love. Nina and I fell hard, and our husbands did too. Over the next six years, we would spend hours in each other’s kitchens and backyards, at various beach houses and mountain cabins. The night I was in labor with my second child, it was Nina I called for help. I was scared—I didn’t know how to have two—and it was her voice I needed to hear.

Now, every evening before bed, my younger son, who is obsessed with talking about death, asks me, “Can we talk about Nina?”

The other night, I decided not to start, as I normally do, with the fact that Nina died in February, at the age of 39. Instead, I said, “Nina was my best friend.”

“Why?” he said. He’s also obsessed with asking why.

“Because she was awesome.” I smoothed the hair off his forehead and tried to smile. “And funny. And really smart. And very, very kind.”

Soon, he was bored and wanted to move on to the nitty-gritty: how and why she died. So I gave him the Mr. Rogers-meets-Grey’s Anatomy explanation of metastatic breast cancer that I’ve been giving him every night for the past month. Then we sang “Twinkle Twinkle” and he went to sleep.

Later, I lay in bed staring at the ceiling fan. The “Why?” was all I could think about:  Why was Nina my best friend?

Meeting her was like meeting a secret part of myself. Like coming home. We were different in a lot of ways, but so similar in the important ones. Our brain-eating neuroses. Our penchant for dirty martinis and Marimekko. And, of course, our love of reading. We were both writers and loved books, but Nina—Nina was voracious. At parties, every time someone said, “Oh, have you read Such-and-Such?” she was the one who always said, “Yes.”

A couple years ago, she invited me to join her book club. It was small—just her mom, Jan, and three of Jan’s friends. One of the books we read right after I joined was Lily King’s Euphoria, a beautiful novel about an anthropologist named Nell studying a tribe in Papua New Guinea called the Tam. Late in the book, Nell explains that the Tam believe that love grows in the stomach and that they go around clutching their bellies when their hearts are broken. “‘You are in my stomach’ was their most intimate expression of love,” Nell says. When Nell’s best friend, a Tam woman named Malun, suffers a tragedy, Nell makes sure to tell her, “You are tight in my stomach,” and this brings Malun to tears.

Something about that expression—you are tight in my stomach—struck us, and Nina and I started using it with each other. Every time one of us had something big go down—my father’s triple bypass; her mid-career job switch; that pedicure where my glitter polish had to be removed with a sander—we would call or text and say, “I am holding you tight in my stomach.” And, of course, ever since that morning in January two years ago, when she called and said, “It’s cancer,” I have been holding her tight in my stomach.

I held her tight in my stomach through the chemo, the mastectomy, the months of radiation, and then, like a bad dream, through the night at the ER when she found out that the cancer had metastasized to her spine. She had gone in hoping the pain in her back was just a slipped disc or a pinched nerve—something awful but fixable. It wasn’t. It was her L2 vertebra, consumed by a mass of new cancer. “This is treatable,” the doctor had told her, “but terminal.” She had less than three years to live. I stood with the phone pressed to my head, crying, holding her tight in my stomach.

But here’s the thing: ever since her diagnosis, Nina had been holding me, and everyone she loved, tight in her stomach. Because that’s what she did. When my oldest developed a tic a month before starting kindergarten, she asked after him weekly. How’s T? Still anxious? F had the same thing. I think it’s a first-child thing. Plus, they’re both sensitive. All through her illness, she was always checking in, always wanting to know if we were okay. Three weeks before she died, she asked about my mother, who’d been having health problems. How’s the leg thing? What about her blood pressure? Everyone I know has a story of how she cared for them, kept them tight in her stomach at one time or another.

And yet, I think the most striking example of this is how she chose to live the last two years of her life. Nina was a direct descendant of Ralph Waldo Emerson, but her true literary soul mate turned out to be Michel de Montaigne. Montaigne lived in the 16th century and wrote a series of remarkably modern essays on how to live. He was a man after my son’s heart: he was obsessed with death and asking “Why?” Probably because he lost so many people in his life—his best friend, his brother, and more than one child.

One of the things he wrote was, “We have to learn that what cannot be cured must be endured.” This became Nina’s mantra. She was all about learning to endure it. And not just endure it, but live with it, which she did, gracefully and bravely, not by looking away from her illness and going on with her life, but by looking right at it and bringing it into her life. And in the process, she found great joy.

One of the ways she did this was through writing. Though she was stable, she knew her prognosis wasn’t great, so she spent the fall of 2016 working on her memoir The Bright Hour. She finished the book in January 2017 and later that month, she started having trouble breathing. She posted a message about it on Facebook:

Dispatch from the Oncology Ward on Inauguration Eve: Sometimes it seems like everything in the world is beeping. My chest is tight, and the doctor is talking about how cancer cells can sometimes invisibly fill the microfilaments of the lungs. Also, though—on the hospital tray—there is an unexplored continent of whipped cream in the pudding, and even in their syrup, the peaches are plump, pushing back on the tongue with a lovely and surprising resistance.

See? She didn’t deny or look away from the facts—her chest was tight, the world was beeping—but she made sure to also see the beauty and deliciousness of that world. Why be alive if you’re not going to admire the continent of whipped cream? I wrote her that night in tears and said, You are teaching us how to live.

A month later, her doctor told her the cancer had spread too quickly, that she had only days to live. She was moved to a hospice facility where her two boys and the rest of us could visit. Shortly after settling in, she posted a video she took of her sister-in-law, Jennie, playing guitar. John sat nearby, petting the dogs and singing along, while the boys snuggled with her in bed. She said, “Who needs lungs when you’ve got all this?”  In other words: Hey, everybody. I know you’re scared and sad and furious, but look: the dogs are here, and we’re together, and Jennie plays a mean James Taylor.

One of her last messages on Facebook was a picture of her room, the door open to the garden.  It said:

Dispatch from Hospice: they have morphine, open doors, a burger joint down the road, allow dogs.  John’s playing Springsteen. It’s gonna be okay.

Those messages—true dispatches—weren’t for her. They were for John, for the boys, for her father and brother and all the rest of us out there staring at our screens, our hearts torn open at the thought that she really was going to die. All of us had been keeping her so tight in our stomachs. But she was looking the situation right in the eye. She was letting us know that this cannot be cured, and so it must be endured, and that, believe it or not, it’s going to be okay. She knew we needed to hear that, so that we might endure the silence that was to come. She was taking care of us, the members of her tribe, keeping us tight in her stomach.

Tita Ramirez has an MFA in fiction from the University of North Carolina at Greensboro. She teaches creative writing at Elon University in North Carolina. Her work has appeared in Lake Effect and The Pinch. 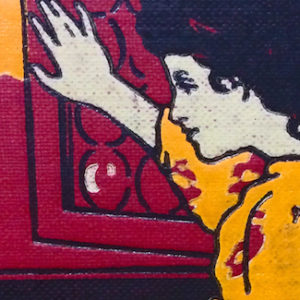 This week, the women behind Brooklyn rare bookstore Honey & Wax announced a new annual prize aimed at bolstering the careers...
© LitHub
Back to top