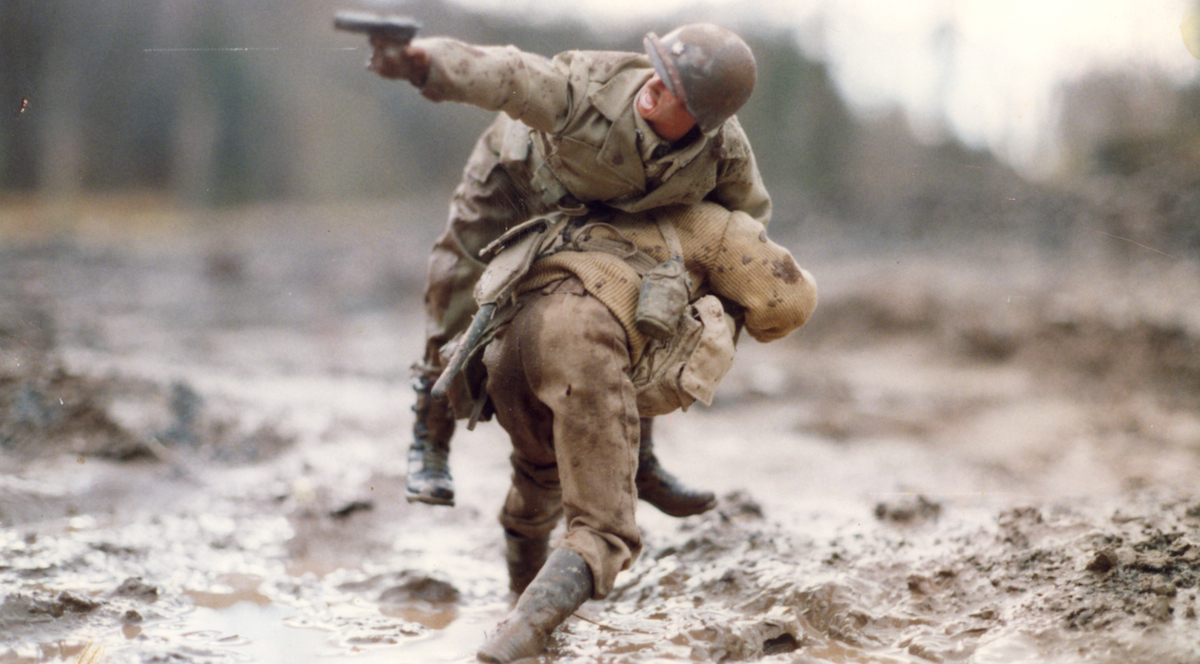 Finding Truth in a Made-Up World

Mark Hogancamp Survived a Brutal Beating By Creating His Own Universe

I have to be careful not to ask Mark too many questions; questions are taxing for him. If I push him too hard, he might have me beheaded or publicly hung in the center of town. (If that does happen, though, I’m hoping for the hanging because at least then I can come back to life.)

Chris Shellen and Mark Hogancamp with their alter egos. Photo by Jeff Malmberg.

I, along with a few other fortunate individuals, lead an unusual double life. In the 1:1 scale world—aka the “real world” —I’m a short, blonde writer and filmmaker. In Mark Hogancamp’s 1:6 scale world of Marwencol, I’m a statuesque blonde, girl-next-door type who shares an apartment with my husband’s alter ego, where I throw the occasional tea or lingerie party in between offing Nazi soldiers.

I first met “Chris” in 2008 when I joined my husband on one of his many trips to film Mark for what would become the feature documentary Marwencol. If you’re not aware of Mark’s story, here is a brief account: In April 2000, Mark Hogancamp was beaten nearly to death by five men outside of a bar in Kingston, NY. He suffered permanent traumatic brain injury; he lost his memories and nearly an eye, and had to relearn how to walk, eat and write.

When his state-sponsored rehabilitative therapies ran out, he took his recovery into his own hands by creating Marwencol—a miniature town set in World War II Belgium. He populated the town with modified action figures produced by Sideshow Collectibles, BBI and the occasional Mattel Barbie, which served as alter egos for Mark’s friends, family members and even his attackers. For his own alter ego, he chose a figure by Dragon Models Ltd. named “Tom,” a Nicolas Cage look-alike from the US Army 82nd Airborne Division.

Manipulating the dolls’ tiny clothing and constructing buildings from found wood and scraps gradually helped Mark to build his dexterity and patience. He painstakingly aged and weathered his 1:6 scale vehicles by dragging them down the road, and in the process improved his sense of balance. And by staging dramas and battles in his town, he was able to retrieve missing memories and work on his cognitive and social skills.

The Knight of Marwencol, about to remove a soldier from Marwencol forever. © Mark Hogancamp / Artists Rights Society (ARS), NY

To archive his adventures in Marwencol, Mark resurrected an old 35mm Pentax camera from his days in community college and started shooting. His early attempts were over-exposed and distant—shots of stiff soldiers taken from several feet off the ground. But his technique quickly caught up with his imagination as he lay in the dirt and mud in order to position himself at eye-level with his “subjects.”

Eventually Mark’s photos grew so startlingly realistic that they caught the attention of the art world, the film world and finally the social media world when Oregon resident Terry Coffey had the misfortune of mistaking one of Mark’s photos entitled “Rescuing the Major” for an actual image from World War II. It wasn’t the first time it had happened, but it was the most public, as Terry used the image to exemplify “real bravery,” as opposed to what he considered the media-hyped bravery of transgender spokeswoman Caitlyn Jenner. His post quickly amassed nearly one million Likes before Terry shamefully realized that his chosen image of heroism had been taken by a man who was himself nearly beaten to death for being a cross-dresser.

The injured soldier in that now iconic photo, roaring as he fires at unseen Waffen-SS fighters, is referred to only as The Screaming Major. The Major has no single real-world counterpart, but his frozen mask of rage is used to great Kuleshov effect in town battles. The rescuer in the photo is the alter ego of Mark’s younger brother Mike, who divides his time between a 1:1 scale life in Florida and a 1:6 scale life as a bodyguard for Mark’s alter ego, Hogie.

Many of Mark’s friends and family members have been honored with a doll in Marwencol at one time or another. Other Marwencol residents, such as Deja Thoris, the Belgian Witch of Marwencol, are composites of people Mark has known throughout his life. He has always had a keen eye for character, and somehow he masterfully imbues each of Marwencol’s dozens of personalities with the unique physical characteristics, mannerisms and reactions of their 1:1 scale inspirations.

I’m frankly lucky to have a doll in Marwencol. My husband and I started dating a few years into his work on the documentary, prompting Mark to worry aloud in his journal that Jeff would never finish the film—that our relationship would be too big a distraction. I wonder sometimes if Mark created my alter ego as a way of investing me in his town, and then raised the stakes by building us an apartment / editing studio above Marwencol’s new Town Hall. When Jeff asked Mark why he’d built us an apartment, Mark replied, “So you have a place to finally finish the movie.” Emphasis on “FINISH THE MOVIE.”

Jeff’s alter ego was originally a German propaganda director, but when Jeff seemed uncomfortable about the idea of being a latter day Leni Riefenstahl, Mark announced that Jeff’s doll had switched sides and was now working for the Associated Press. Jeff got off easy. Other friends who’ve requested character changes or bigger storylines have found themselves meeting a grisly end, executed by Nazis or worse. Recently, the alter ego of a reporter who misquoted Mark was found beaten and hung in the middle of town. That may seem like a gruesome response to a gripe with the press, but it’s arguably more cathartic and less risky than punching a wall or penning an angry letter to the editor.

And it makes perfect sense. Mark created Marwencol. It is his town; it’s the order he made from the chaos that precipitated it. Unlike the 1:1 scale world, which is filled with physical and man-made laws, his world has none. Or at least none that he didn’t devise. Characters can visit from the past, future or alternate dimensions. (Want to meet Patton or Stunt Man Mike from Death Proof? Come over to Hogancamp’s and buy them a beer!) People can change identities, partners and ranks at will, all without judgment. If you need a vacation, Mark will take you fishing or skiing. Alter egos of real people who have died—Mark’s mother, his grandparents, his friend TC—all enjoy exciting afterlives in Marwencol. And if your alter ego dies inside Marwencol, they, too, can always come back to life. At least as long as they aren’t beheaded by the Knight of Marwencol.

In today’s world, many of us have our own alter egos—avatars in games or false identities on internet forums. It’s one way of coping with a world that is increasingly public and judgmental. It also allows us to be honest about our deepest desires and worries, to shed the confines of our existing roles, and experience life on the other side. In a small way, we’re all searching for what Mark discovered intuitively; we’re all trying to find our Marwencol, where we can safely process our feelings, develop skills without embarrassment, and experience things that our current realities don’t allow. There is a freedom in those worlds that most of us lose as soon as we acquire all of our permanent teeth.

For my part, I prefer my second life in Marwencol to one lived online or in a game. It’s refreshing to let someone else guide me through adventures that are unbound by my own limited imagination. Of course there is always the risk that my alter ego will get hurt or lost in a box in the back of Mark’s trailer, as she is now. But rebirth is easy in Marwencol—it’s just an eBay click away.

Chris Shellen is a writer and filmmaker living in California. She is the co-author of Welcome to Marwencol and producer of the award-winning documentary Marwencol about artist Mark Hogancamp. Together with partner Jeff Malmberg, she founded Open Face, a film, literary and new media production company. 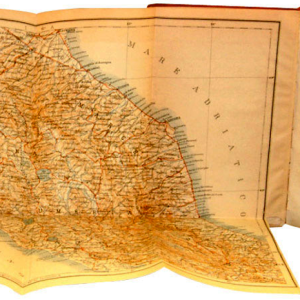 Chris Shellen meets a ten-inch version of herself, and discovers other wonders in Mark Hogancamp’s miniature WWII...
© LitHub
Back to top
Loading Comments...