Finding Freedom in Writing a Language My
Parents Can’t Read

Kia Abdullah on Being Herself in Print

My mother is not a warm woman. Perhaps she once was, but the quiet desperation of raising eight children wore it away by the time I arrived, her sixth child (seventh if you count the one she lost).

My mother was sharp of tongue and quick to censure; smart but frustrated; trapped in a life she hadn’t imagined when she left Bangladesh for a prosperous Britain, then found herself with child and then another and another and another. The monumental effort of keeping us fed, clothed, and clean left little space for sentiment or sympathy. There were no fortifying words of wisdom or soothing of our ills—rather, a stoic determination to get us to the end of another day.

The only time I felt connected to her was when she would feed me rice as a very young child and tell me stories to keep me occupied. Kitcha kho, I would ask at the start of our evening meal, imploring her for a story. She would oblige with tales of faraway lands, of battles fought and won, of wise old men and foolish upstarts, of farce, risk and whimsy.

In the context of our religious upbringing—Qur’an lessons twice a week, no intergender mixing and a strong emphasis on modesty and piety—my mother’s stories felt vaguely subversive, as if the very act of making up lives should be reserved for Allah only. With these stories, she forged in me a nascent writer.

I first understood the power of words when I was ten years old and found a piece of my writing—a missive calling for gender equality in my family—ripped to shreds and strewn about the landing, my brother clearly angered by it.

In seeing his reaction, I realized that I could unpick the seams of the status quo by putting my voice in writing. I was most expressive in English, the language of Anne Shirley, Jo March, Scout Finch and my other literary heroines, and the fact that my parents could neither read nor write it only fueled its allure as a means of subversion.

I realized that I could unpick the seams of the status quo by putting my voice in writing.

The first piece of work I published officially was at the age of 24 in Asian Woman, a UK-based monthly magazine aimed at women of South Asian heritage. The essay posited that women who educated themselves would never be content in an arranged marriage because they sought agency, equality and partnership, not just a rubber-stamped pairing. I was able to be critical, even unkind, about this core part of my culture because I knew my parents would never read it.

Over the next 12 years, I wrote with impunity about sex, adultery, drug abuse, sexual abuse, honor killings and other taboo subjects. My parents with their strict conservatism and profound religious beliefs could not read a word and therefore could not censor me.

On occasion, this would cause an issue; my mother learned second-hand about my debut novel which depicted sex and drugs in east London, and unable to read it for herself, she imagined only horrors. On another occasion, I lamented the lack of self-control in smokers and likened their habit to animal instinct. A relative told my father, a smoker, that I had written he belonged in a zoo.

Some writers adopt a pseudonym in pursuit of creative freedom or out of a concern for safety.

Historically, women have published under male names to sidestep cultural norms, George Eliot and the Brontës among them. Other writers have used pseudonyms to publish explicit content—take the notorious Story of O, whose real author, Anne Desclos, remained anonymous for 40 years, or The Sleeping Beauty Quartet, written by Anne Rice under A. N. Roquelaure.

He added, “There is no way my novel would have been as bold and honest if I was writing under my own name. I really feel like I can write the novels I always wanted to read, hiding behind this cloak of a pseudonym: fun, exciting and entertaining.”

A pseudonym can be a political statement, an overture to a new demographic, the cleaving of a public image.

Like Alex, I recognize the appeal of a pseudonym and not just as a vehicle for explicit writing. A pseudonym can be a political statement, an overture to a new demographic, the cleaving of a public image, the erasure of an oppressive legacy or a means of artistic refashioning—and yet my ego rejects it as a possibility. I cherish the creative freedom to write what I want under my own name.

I am certain I would have self-censored if my parents were able to read my work. I would have been softer, sparer and far more sedate. The first chapter of my new novel would make no reference to freshly stained sheets or skin gleaming with sweat and regret. It would not mention alcohol or pills or unholy foreskin, nor suggest that these were rites of passage for modern middle-class Muslims. My work would have felt pinched and brittle with less space to breathe.

After three novels, 200 columns and dozens of features in print, I do feel a certain melancholy that a language I love so deeply for its richness and its range will never be known to my parents. I do feel bouts of sorrow that they will never feel proud of my work or recognize that this poor kid from east London grew up to become a published author. Equally, I am grateful for the carte blanche to write without surveillance.

My partner’s father recently asked if he could have an early copy of my forthcoming novel. I balked at his request, but assured him that he could. The fact that he was keen and able to read my work filled me with unease. He is a mild-mannered ex-history teacher and as devoutly religious as my mother—not the target audience for my gritty courtroom drama. I told him I would send him a copy, but have yet to find the courage.

My mother makes occasional rumbles about learning English. I know that after 40 years in the UK, she never will, and this brings with it a type of freedom seldom gifted to writers like me. For that, I can only be grateful.

Kia Abdullah is an author and travel writer from London. She has contributed to The New York Times, The Guardian, BBC and Lonely Planet, and is the founding editor of outdoor travel blog Atlas & Boots, read by 200,000 people a month. Kia's new novel, Take It Back, will be published by HarperCollins in August 2019.

11 Books You Should Read This May

A Writing School for
Working People 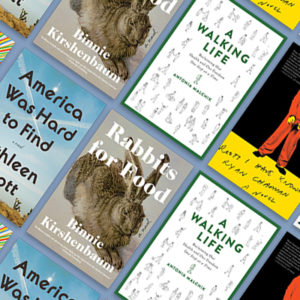 11 Books You Should Read This May