Finding Communion With One of England’s Ancient Oak Trees

The Honywood Oak lives on the Marks Hall Estate in north Essex. The tree stands in its own circular enclosure: a low wooden railing that separates the ancient oak from the pine trees surrounding it. The oak has lived here for over eight centuries. Its trunk is knurled and ribbed and close to thirty feet around. The spread of its green-leaf canopy stretches a hundred feet into the spring sky. The tree was a mere sapling when the Magna Carta was signed, when King John reigned over England. As a 400-year-old, its canopy sheltered soldiers during the English Civil War. The owner of the Marks Hall Estate was then Sir Thomas Honywood, a Parliamentarian leader who served in the siege of the local town of Colchester in 1648 and after whom, in more recent years, this grand old oak has been named.

Once there were many oaks, hundreds of ancient trees huddled across these lands. Now there is one. It is a single, lone figure, born on this very foot of soil 800 years ago and rose from an acorn to a great tree in the blink of time’s eye. I came one day to see this oak, born so long ago, so far beyond the memory of any living human being. I sat in its presence and knew that here was peace.

Beside the coach house, where I parked my car each visit, there is a simple wooden gate that opens onto the heart of the estate. In the moment of stepping through that doorway something truly magical occurred, some form of transformation that allowed me to cast aside all the cares that had gathered upon my shoulders. Once beyond the gate, I ventured into another world.

The gate leads directly into an orchard through which I would walk down into the gentle valley of the stream that weaves through the estate. A path winds to a stone bridge beside a lake. Beyond is the Honywood Oak. The ritual of that short walk was something like stepping back into paradise. Through the gate, into the orchard, down to the lake, over the bridge, up to the ancient oak. The journey took only a few moments. But in that short time, I was relieved of all burdens.

I am greeted by Jonathan Jukes. He is a calm, modest man. His job title is curator of trees. We walk down from the coach house and across the stone bridge. I look over to the oak as Jonathan starts to tell me the tale of the 300 other ancient oaks that also used to live on these lands and once formed part of an extensive deer park. In the 1950s, almost the entire population of those oaks was felled for the value of their timber. Four younger trees of 300 years or so that grew on the garden edge of the gamekeeper’s cottage were spared. They live on. The burnt remnant of another aged oak tree known as the Screaming Oak stands crippled and disfigured, yet it has somehow managed to keep life in its boughs. Only one of the truly ancient oaks was shown mercy: the Honywood Oak. It is the sole survivor to remain intact.

The ancient oaks are loved by country people precisely because they allow a physical way to commune with and to remember their own ancestors; they are often to be found in the center of village life.

The Honywood Oak sits on the border of what once would have been some 2,500 acres of ancient woodland. Quite why this individual tree was spared the axe and the saw is a mystery. The man who has thought longest on the matter, Jonathan—who now acts as guardian to this gracefully ageing tree—believes that the tree must have held some special significance to Thomas Phillips Price, then owner of the estate.

“It may well have been that Phillips Price enjoyed the sight of the grand canopy from the top floor window of the big house,” Jonathan says. “There’s a photograph from that time of a bench tucked against the trunk of the oak.” He may well have liked to sit under the umbrella of oak leaf that unfurled each spring, to pass a moment in the cool shade of the tree away from the heat of the summer sun. Thomas Phillips Price died in 1932. The big house was demolished in 1950 after falling into disrepair. The truth is that no one alive knows exactly why this one single ancient tree survived the cull of the 300 other ancient oaks that had lived happily in this hidden corner of England for many hundreds of years.

It is a clear, blue-skied summer’s day. The pine trees that surround us were planted as a replacement for the oaks. In that short time, they have risen to the height of the Honywood Oak and now dominate the landscape. We wander through the undergrowth of this young pine plantation where a tribe of pigs had been let loose to eat away the stubborn mesh of bramble which had built up over the years. The pigs have vacuumed the land clean. Eighteen months since they have cleared the ground, a newfound resurgence of life has emerged. Glorious pink foxgloves reach from the soil; seeds that were dormant for years have now sprung.

Jonathan tells of the time when gangs of woodmen arrived in the woods back in the 1950s. A local firm named Mann’s carried out the work, which must have taken weeks, or even months. I try to imagine the scene. The chopping and cutting with long-bodied axes and with stretched two-man saws that wove back and forth into the deep flesh of the trees, and so into the heart of the woods.

There is a sense of corporeal connection and so a powerful feeling of remembrance in the simple act of touching an old oak.

Robert Burton used the somewhat proverbial line, “an old oak is not felled at a blow” in his The Anatomy of Melancholy (1621). Some centuries later, Thomas Hardy’s poem “Throwing a Tree” pictured the felling of a tree by “two executioners” who are “bearing two axes with heavy heads shining and wide / And a long limp two-handled saw toothed for cutting.” In the final line, Hardy writes of “two hundred years’ steady growth . . . ended in less than two hours.”

So how long did it take to fell each 800-year-old oak tree?

“I met someone recently, at a funeral,” Jonathan says, “who had been here in those days, who had worked at the task of felling the ancient trees. There may well be others in the surrounding villages who were here 60 years ago as young men, earning a few shillings to turn trees to timber.”

If there are, they will all be old men now.

Ronald Blythe told me not long ago that the ancient oaks are loved by country people precisely because they allow a physical way to commune with and to remember their own ancestors. They are often to be found in the center of village life, either on the village green or on the well-worn pathways that weave around the hedges and fields. Those trees act as conduits to connect us with those who have gone before. Beloved parents, aunts, uncles, grandparents of earlier generations have also touched the ribbed bark of the tree where now living hands brush the same coarse skin. There is a sense of corporeal connection and so a powerful feeling of remembrance in the simple act of touching an old oak. It is a bodily remembrance through time.

“They had a raw deal,” Jonathan says as we walk in flickering shade.

He is talking now of the oaks that were felled here. He talks of their lives having been taken. We have arrived back at the Honywood Oak. The tree has reached old age. It is “growing back down,” says Jonathan. Just like those last surviving woodmen who swung their axes here in these woods 60 years before, the oak tree is now settling into a peaceful third age.

“They weren’t all as old as the Honywood Oak, were they?” I ask.

“No,” says Jonathan. “I don’t think so. Though there were some of considerable age and certainly some were bigger trees.”

“So even older than the Honywood Oak?” I ask.

There is an inventory of all the significant oaks that once lived on these lands, he tells me, which is held in the Marks Hall archive. After Thomas Phillips Price bought the estate in 1897, his land agent measured all the larger oaks—their height and girth is recorded in ledgers that can still be seen today.

“So you get an idea of the size and the stature of the oaks that were in the deer park at that time.”

I look about us at the tall frames of the pines. I try to see ancient oaks. It is hard to do, hard to imagine the scale of the loss.

“They should never have been cut down,” Jonathan states. “It is written in Thomas Phillips Price’s will that ‘the oaks must never be felled.’”

One hundred years ago, the ancient oaks of the Marks Hall Estate were not individually named but were collectively known as the Honywood Oaks. At some point after those Honywood Oaks of the deer park were culled in the 1950s, the name became singular.

I am struck with a genuine sense of sadness at their loss.

Ancient oaks have always held our affection but often, too, our awe. Francis Kilvert, writing in 1876 on the ancient oaks of Moccas Park, Herefordshire, knew such contrasting feelings:

I fear those grey, old men of Moccas, those grey, gnarled, low-browed, knock-kneed, bowed, bent, huge, strange, long-armed, deformed, hunchbacked, misshapen oak men that stand waiting and watching century after century . . . No human hand set those oaks. They are “the trees which the Lord hath planted.”

The trees become “oak men” and strange and fearful figures. Perhaps in such a transformation comes their salvation. And they are divine, too. No one wishes to cut down and kill revered beings sown by God’s own hand.

To lose any single ancient tree is to lose an entire woodland community. Each aged oak is home to a complex, multitudinous collection of bats, insects, birds, fungi and plants. Jonathan compares each ancient oak to a block of flats. William Cowper in his “Yardley Oak” (1809) saw the tree as “a cave for owls to roost in.” But it’s not merely owls given homes. From treecreepers to hornets, the aged oak plays host to a range of bio-diversity unparalleled by any other tree.

I stand in the wood and strive to imagine the vast lost population of wildlife that would be here were those hundreds of ancient oaks still alive within these soils. Those are the ghost worlds that haunt these woodlands. 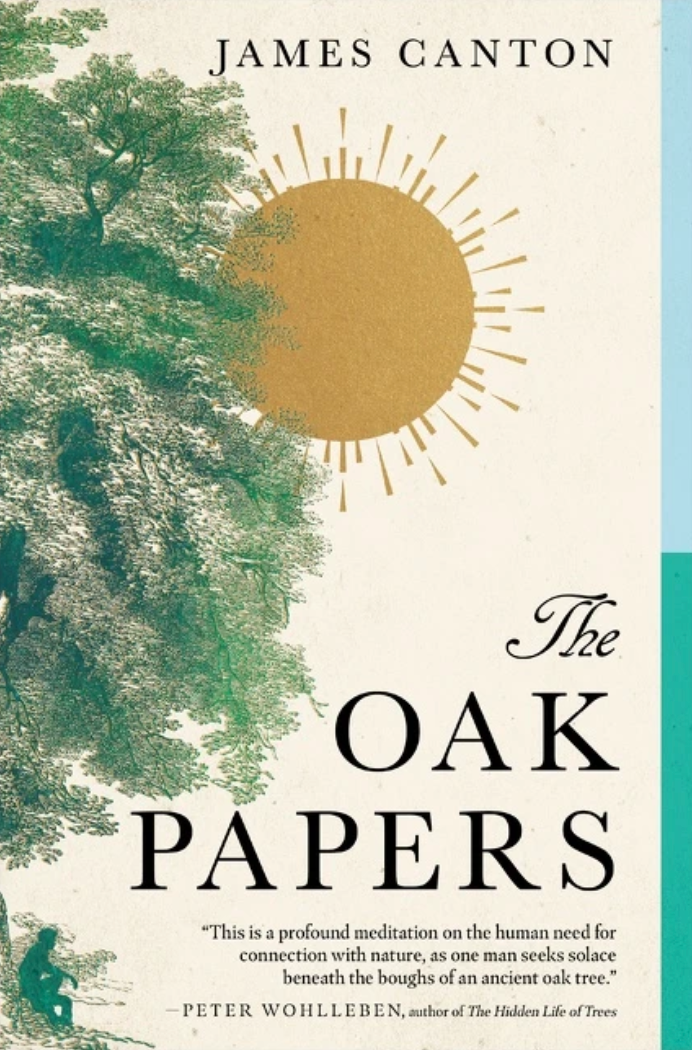 Excerpt from The Oak Papers by James Canton and reprinted with permission from HarperOne, an imprint of HarperCollins Publishers. Copyright © 2021.

Dr. James Canton runs the Wild Writing MA at the University of Essex and is the author of Ancient Wonderings and Out of Essex: Re-Imagining a Literary Landscape, which was inspired by his rural wandering in East Anglia. He was awarded his PhD by the University of Essex and reviews for the Times Literary Supplement, Caught by the River, and Earthlines. Canton is a regular on British television and radio and lectures frequently. He lives in Essex, England. 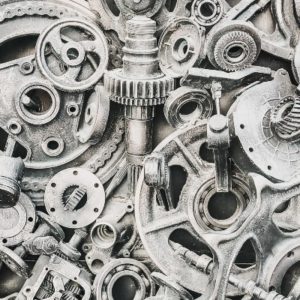