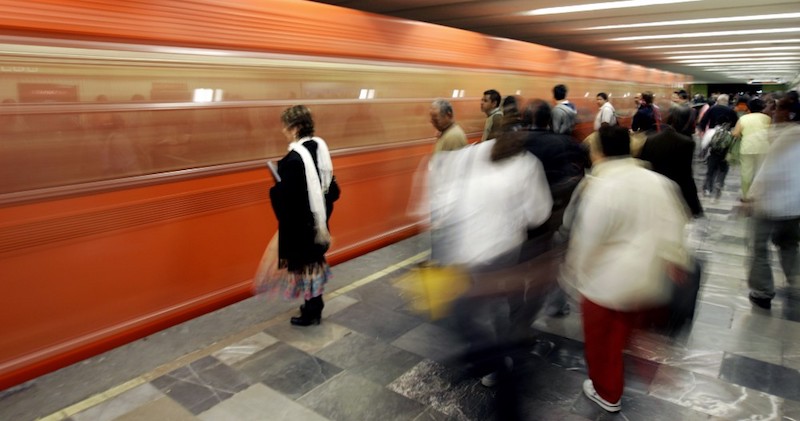 When I Ride the Women-Only Car, I Can Temporarily Forget My Body

I move to Mexico City and become eminently aware of the quality of my body. This city of nine million people harbors unimaginable crowds, and the crowds move with a fierce unity. One hears of a mob mentality; here we have a mob corporeality. The first time I ride the MetroBus, I watch people exit with awe. The 22 million people who use Mexico City’s transit system each day emerge through the bus’s crush onto the platform. Bodies materialize from behind other bodies. The crowd opens just enough to spit out bodies, then closes again. In October, a little more than a month after I move to the city, I walk with a friend to the Zócalo—the main square—to see the end of a Día de los Muertos parade. We make our way to the Zócalo from the Alameda Central, typically a walk of 10 or 15 minutes, but which now takes us over an hour. My body takes on the rhythm of the bodies around it. I find my body moving of the crowd’s accord.

Mexican writer Carlos Monsiváis captures this crush beautifully. In the essay collection Los Rituales de Caos—translated into English as Postcards from Mexico—he meditates on Mexico City’s crowds in all their manifestations. He takes us to the Basilica of Guadalupe, where throngs of pilgrims venerate the Virgin; the Angel of Independence, where soccer fans riot to celebrate a win; the Chopo punk street market, where punks swap records. Monsiváis returns to this motif over and over. As he proposes in the opening essay, La hora de la identidad acumulativa, Mexico City is, in an image, the “too-many-people.”

In Monsiváis’ Mexico City, the masses are prone to spectacle. Crowds are marked by their fanaticism, whether for a cult religious figure, for Lucha Libre, or for the excesses of consumer culture. He likens the hordes exiting the Metro to a parade of clowns descending from their taxi: in the Metro, the crowd itself is the spectacle. Commuters obsess over finding space within space. Bodies test their own limits; everyone develops, as Monsiváis writes, the “skill to suddenly slim down and later recover their weight.” All these things are true and more, and yet, here, in the spectacle of the Mexico City metro, I find unimaginable solitude.

In the women’s only car I experience a respite, however fleeting and illusory, from the anxiety of carrying around my body.

I’ve harbored, for as long as I can remember, a deep affection for public transit, dense cities, and the particular quality of interiority that they cultivate. Nowhere do I experience this more than on the women-only cars of Mexico City’s metro. The concept is brilliant: the first two or three cars of each train, or the front half of each MetroBus, are reserved for women, children, and people with disabilities. (The subway stations mark the women-only boarding areas generously with bright pink barriers. In many of the MetroBuses, the front seats are all, also, bright pink.) The womens’ cars are no gentler than the others, or more spacious, or less crowded. If anything, passengers push each other more persistently, unfettered by any fear of indecency that may lead men to defer every so often. Still, I find them sororal and collaborative. When I can’t reach a pole to grab for balance, a woman offers me her shoulder. During the morning peak hour, I watch women deftly apply full faces of makeup—complete with contouring and false eyelashes—while wedged between a body and a door. One day, I find myself on a hopelessly congested platform during the evening rush. Train after train passes with faces crushed against the glass. When the train stops, the women on the platform cluster together and count to three, then push with all their collective force to get one or two ladies on board.

It would be foolish to entertain the notion that the overwhelming female-ness of this space guarantees its safety. Still, I rarely inhabit public spaces that are so predominately female; rarer still do I find spaces designed to be that way. To be a woman in a city brings a particular vulnerability. It is impossible to not think about one’s female body in the city, especially in Mexico City, where this fall, several trans women were the victims of feminicides. City streets come with gendered prescriptions: where to walk and when and how. To present as female feels as risky as brandishing a shiny new DSLR, or pockets stuffed with cash. In every city I’ve ever walked, street harassment has consistently punctured my most blissful moments of flânerie. From time to time, I find myself reminding male friends of the anxiety of being a woman in the city. Their experience of the city is just as gendered as mine, I realize, because they regularly, blithely, forget about their bodies. Amid these geographies of violence, no woman has that luxury.

In the women-only car, though, I experience a respite, however fleeting and illusory, from the anxiety of carrying around my body. There, on my 23rd birthday, I begin reading A Room of One’s Own. It is rush hour, and I peer into my cell phone. The car is so crowded I don’t need to hold on; I don’t even need to brace my stance—the bodies hold each other upright. I read Virginia Woolf in the crush of hundreds of strangers. The metro lurches me worlds away from the private sitting-room that Woolf wishes for all aspiring female writers. Yet here, where I squint into a screen held inches from my face and shift between other women’s shoulders, her words resonate with me.

In A Room of One’s Own, Virginia Woolf famously meditates on the relationship between being a woman in space and being a woman writing. She adopts a sardonic tone when recounting her wanderings through Oxbridge: here, a man scolds her for walking on the turf designated only for Fellows and Scholars—male Fellows and Scholars, it goes without saying. There, a man turns her away from the library. The university, like the city, has gender coded into its geography; in the city, this indignity often translates into physical violence. Woolf sees these spatial barriers as continuous with the constraints on women who write: how can a woman access literature if she can’t even enter a library? As a woman, her body always precedes her. For women to write, she argues, one needs a space free of the limitations placed on her body.

Of course, Woolf was writing from a place of exceptional privilege and wealth. She had the leisure to spend her October sitting by the lake or strolling university campuses, and though one library refused her entry, she later recounts her hours in the stacks of another. (Woolf acknowledges the uniqueness of her position when she remarks at the freedom allowed her by her inheritance of 500 pounds each year.) And history shows us that many women have written well amidst much less than Woolf’s optimal conditions. Alice Walker notes in her essay “In Search of Our Mother’s Gardens,” that the example of the 19th-century black poet Phyllis Wheatley, who wrote while enslaved, suggests that material conditions are not entirely unsurmountable. A lack of money, space, and material self-determination doesn’t universally stifle the creative urge; at times, those conditions can feed it. Still, Walker mourns the countless other female artists suppressed by slavery, and she laments the would-be artists restrained by their material conditions. Just by listening to the singing of Bessie Smith or Billie Holliday or Roberta Flack, she notes, one can imagine the incredible gifts stifled inside “the agony of the lives of women”—particularly black American women—“who might have been Poets, Novelists, Essayists, and Short-Story Writers.”

Everyone else is obsessed with the female body. They want to see it, yell at it, touch it, cover it, purify it, protect it, erase it, legislate it.

Both Walker and Woolf come to the conclusion that women’s writing is limited by the constraints placed on them by virtue of their bodies. For black women, race as well as gender imposes these limitations. I find it an unbearable cliché and, increasingly, an occupational hazard of being a young woman: it is difficult to write about anything but my body. I am always writing from it. No one will let me forget it. Woolf formulates this fixation, as she finds it in the library, beautifully: “Have you any notion of how many books are written about women in the course of one year? Have you any notion how many are written by men? Are you aware that you are, perhaps, the most discussed animal in the universe?” Everyone else is obsessed with the female body. They want to see it, yell at it, touch it, cover it, purify it, protect it, erase it, legislate it. They find it revolting and alluring and comforting.

Thus the significance of women accessing physical spaces where their bodies can be left alone, where they can access activities elsewhere restricted to them. That physical space can be a room without interruptions, or a city without violence, or, in my case, a women-only Metro car. I am certain that some women find the Metro an impossible place to think. For me, though, despite the constant physical contact, I feel myself a hermetic unit unlike anywhere else.

I grow to love the days when I enter the train so crushed I exert no effort to stand. I haven’t written, really, for several years, but as I ride the Metro in Mexico City, I start once again. The crush lures me into introspection. When I want to be alone, I ride the Metro. Monsiváis lauds the interior state produced by the crowds: “We are so many that millions share the most eccentric thought. We are so many that no one cares if others think the same or differently.” The masses allow for an incredible absorption. My body navigates me automatically through the labyrinths of transfers in unfamiliar stations. I lose all sense of time. In the women’s car, I let my guard down. I go to the Metro to write poems, to work over paragraphs of essays, to thumb furiously through my phone as I wedge myself between a door and a pole and another body.

To write on the Metro is, in Monsiváis’s world, to lose myself in the spectacle. It is to be one body and mind jostling with millions. Months after I move to Mexico City, I finally finesse the art of boarding the Metro. I learn to enter with shoulder, hip and elbow. I learn to make space, and when I squeeze until the women’s car at rush hour, I find my body has been returned to me. I write to the crowd’s lurching rhythms, and I have a room of my own.

Madeleine Wattenbarger is a freelance writer, researcher & translator living in Mexico City. She is originally from Philadelphia.

10 Books to Read During the Women's Strike 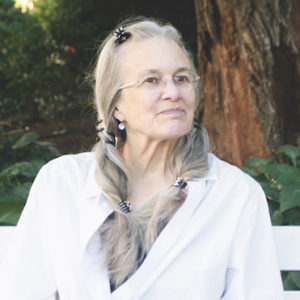 Sharon Olds can still remember how furious editors became when she started submitting her poems, 40 years ago. “They...
© LitHub
Back to top