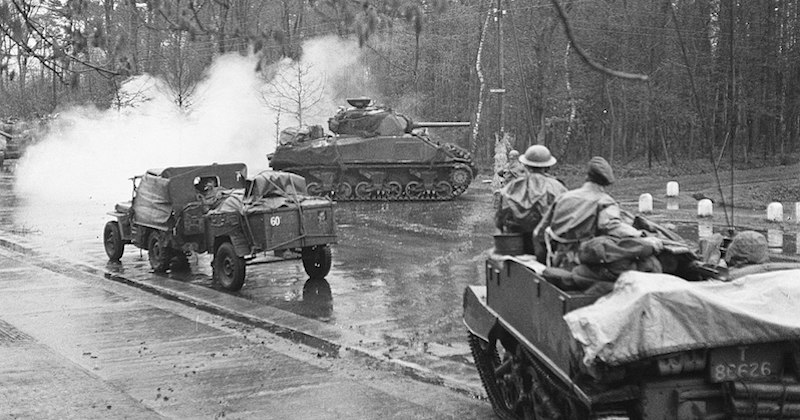 Filthy, Smelly, Sleep, Repeat: On the Challenges of Fighting Inside a Tank

James Holland Recounts the WWII Experience of the Sherwood Rangers

A lot was expected of all these young men fighting in WWII, but especially of the tank commanders and the troop and squadron leaders. “The driver suffers the greatest physical strain,” noted one report, “but the tank commander is subject to the greatest nervous strain resulting from constant tension, especially in combat.” Absolutely. Sticking the most vulnerable part of one’s body above the protection of the steel hull and concentrating, concentrating, concentrating constantly, was utterly exhausting, mentally and physically. Tanks were designed to bring a degree of flexible firepower and crew protection to the battlefield, yet the needs of the crew manning them had not yet caught up with the technology—except, perhaps, for a padded seat and head rest above the optics.

Visibility was always a problem in a tank, yet poor visibility was the price paid for the strength of its defenses. Dust, grit and mud continually got in the eyes and at the back of the throat. When it was dry, the amount of dust whipped up was extraordinary. You really needed goggles, but these were never quite good enough, and although essential for the driver and lap-gunner if their heads were out of the hatches, commanders rarely used them. And when it was wet, the dust would turn into mud and grit, all of which got spat up at the crew.

Then there were the fumes. The noxious smoke and exhaust produced by the tank were fairly effectively sucked out of the turret and hull, but still repeatedly swirled around the inside, where, like the dust, they got into the back of the throat and the lungs. On a warm day it would also be blisteringly hot inside, the sun and the heat from the guns baking the steel like an oven. An American report recommended ten hours as the absolute maximum a crew should spend in a tank, but many days in combat were inevitably much longer than that—especially in summer, when the hours of daylight were at their greatest. At the front, most crews in the Sherwood Rangers were doing well to get four hours’ sleep in 24.

Up at 4 am, or a little after. A mug of tea, some breakfast. Make sure the tank is ready. Stow personal kit away. Wait to move. Into action at, say, 6 am, maybe 7. Then in combat all day. Of course, there were always lulls—but for the tank commander, especially, there was little respite. A tank with hatches down was a blind beast, and it was more dangerous to be blind than for the commander to have his head out of the turret. Yet the commander had to be alert all the time. Watching, directing, giving orders and listening to others on the net at the same time, alert to the faintest movement ahead and on his flanks.

Visibility was always a problem in a tank, yet poor visibility was the price paid for the strength of its defenses.

Decisions had to be made constantly. And that was just the tank commander; for the troop leader, and especially for the squadron leader, it was much worse. So much responsibility rested on their young shoulders. A moment’s lapse in concentration, a moment when they stopped looking, or failed to process information correctly—that moment could be the difference between their men living and dying. “The tank commander spends at least 12 hours a day standing,” said John Semken. “It really is exhausting.” As dusk fell, they would usually—but not always—be pulled back. On alert until dark.

Then O groups for the tank commanders and maintenance tasks for the crew. Some supper. A tarpaulin pulled out from the side of the tank, bedroll out. Fully clothed. Filthy, smelly. Sleep at midnight, maybe 1 am. Then repeat. And all the time men were being wounded and killed, the troops and squadrons shifting in shape like desert sands. That, too, played on the nerves, as did the sheer fear of upcoming action. One tried not to think too hard about it, but it was difficult not to.

Stan Perry quickly imposed a strict new rule in his troop. “As soon as the troop moved off,” he said, “I would call a halt and dismount. And I expected my tank crew and my troop tanks to bale out immediately, no matter where they were or what the ground was like.” He believed it was an important and potentially life-saving exercise. If hit, they had perhaps 20 or 30 seconds to get out before the tank brewed up. “And I thought it was important we had routines and quick reactions. You didn’t mess about.” He developed a system whereby the gunner would put his shoulders under the tank commander’s backside and give him a shove to hurry him out of the turret, then the operator got his shoulders under the gunner and pushed him up, and finally the gunner reached down and pulled up the operator. “So we went out in a quick stream.” The driver and lap-gunner would similarly practice getting out of their hatches. A drill practiced repeatedly could be carried out even in the panic of a flaming tank. That was Perry’s hope, at any rate. 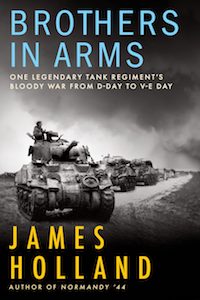 Excerpted from Brothers in Arms: One Legendary Tank Regiment’s Bloody War from D-Day to Ve-Day. Used with the permission of the publisher, Atlantic Monthly Press, an imprint of Grove Atlantic. Copyright © 2021 by James Holland.

James Holland is the author of Big Week, The Rise of Germany and The Allies Strike Back in the War in the West trilogy, as well as Fortress Malta, Dam Busters, and The Battle of Britain. Holland regularly appears on television and radio and has written and presented the BAFTA shortlisted documentaries Battle of Britain and Dam Busters for the BBC, among others. A fellow of the Royal Historical Society, he has his own collection at the Imperial War Museum. 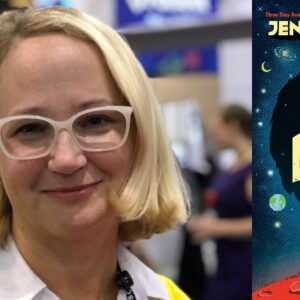