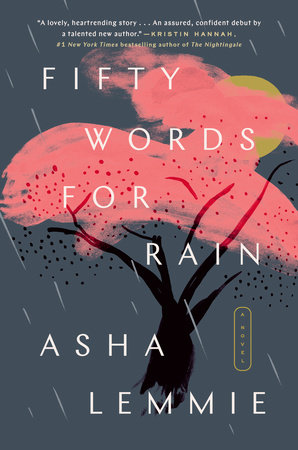 The following is excerpted from Asha Lemmie's new novel, Fifty Words For Rain. After graduating from Boston College with a degree in English Literature and Creative Writing, Lemmie relocated to New York City where she worked in book publishing. Fifty Words for Rain is her first novel.

One downcast morning at the end of January, her grandmother arrived out of the blue and announced that Nori had a brother, and that he was coming to live with them.

She had a brother.

Nori blinked uncomprehendingly, her sewing needle still poised in the air. The cloth doll whose button eyes she was trying to fix lay forgotten in her lap.

“Nandesutte?” she queried dumbly, unable to devise anything cleverer. “What?”

Yuko scowled, clearly irate at having to repeat herself.

“I had not told you this before, but it is time you know. Your mother was married before her disgrace . . . before you were born. She had a son from that marriage. His father has just died, and so he is coming to stay with us. In fact, he should be arriving presently.”

Nori nodded, hoping that if she did so, her brain would somehow absorb the information being presented to her. Somehow the information about her mother and about the past, which she had so longed for, now seemed laughably irrelevant.

“He is coming today,” she parroted. “To live here.”

Her grandmother gave a stiff nod and continued, clearly displeased at being interrupted to begin with. “He is 15. I have had reports from his teachers and other family. They say the boy is exceptionally gifted. He will bring great honor to this family.” She paused, waiting for Nori to react. When she got no such reaction, she let out a sigh of frustration. “Noriko, this is good news. We are all to be happy.”

It was something she had never said before.

Her grandmother pinned her with a cold stare. For a happy woman, she appeared as mirthless as always. “He has been told of your . . . presence.” The old woman made a sour face.

Nori could only assume that the impending arrival of this boy made the once tolerable shame of a bastard seem all the more heinous.

While her grandmother normally appeared quite indifferent to Nori’s existence, though sometimes, paradoxically, perversely interested in it as well, she now seemed to have lost what little patience she’d once had. Nori could only assume that the impending arrival of this boy made the once tolerable shame of a bastard seem all the more heinous.

Her grandmother took a deep breath and continued.

“I have assured him that you will not bother him. If he chooses to acknowledge you, so be it. But you are to speak nothing to him unless you are spoken to. He is the heir to this house. You will show him deference and respect, beginning with silence. Wakarimasuka? Do you understand?”

Normally, Nori would have nodded, or lowered her eyes, or done any number of things to show her willingness to obey, in the vain hope that these little gestures were somehow being seen by her mother, wherever she was.

But just as she was about to do this, something burst out of her. The word ripped through the seam of her closed lips.

A dead hush enveloped the room. Nori looked around to find the person who had uttered that word. Surely it must have been someone else.

Nori looked at her grandmother, who appeared equally shocked. Those sharp eyes widened; that puckered mouth went slack. She too passed an inadvertent glance around the room to make sure there was not a ghost among them.

Nori tried to form her lips to retract her defiance, but instead more emerged. “I . . . What I mean is that I . . . I must speak to him. I have to speak to him. Onegai shimasu, Obaasama. Please.” This second time, Nori was not given the benefit of a delayed reaction. Her grandmother closed the distance between them in mere seconds. Nori heard the slap across the cheek more than she felt it. Her head snapped to one side, eyes losing their focus and seeing only white for a few seconds until they found a place again. The doll slipped onto the floor and Nori went with it.

Her grandmother lowered her hand, face betraying no traces of emotion. No anger. No nothing. She simply repeated her question, speaking slowly in a calm tone, as one would speak to the mentally deficient.

In one crushing moment, the fear of God returned to Nori. The switch flipped back on. The world refocused. A little voice spoke from somewhere in the distance.

“Yes, Grandmother. Of course. As you say.” This response was met with a curt nod.

“Good. I will send for you when he arrives. Akiko‑san has bought you something new to wear for the occasion.”

It had been over six months since Nori had received a new article of clothing. She lived for receiving gifts: anything shiny, anything that she could tie into her hair or around her neck in a bow. They were by far the highlights of her existence. And yet she could find no joy in this news of a new dress. She could not even wonder what color it was.

Though she knew she should express gratitude, she could not bring herself to say the words.

Somehow, though she could barely hear the words over the thumping of her own heart, Nori managed to nod periodically. Despite the warm temperature of the attic, her skin was crawl‑ ing with goose bumps.

Her mouth felt as if it were filled with sawdust.

It was only after her grandmother had turned and was beginning to walk away that Nori realized what she had forgotten. She took two tentative steps forward and reached out a shaky hand, unsure of what she was attempting to grasp.

Her grandmother paused for a moment and turned her head, the silky curtain of her hair rustling as she moved. The look on her face was thunderous.

“His name . . .” Nori stammered, blinking uncontrollably for some reason. “What is his name?”

And with that, she walked briskly away, clearly having spent more time on this exchange than she had ever intended to.

Nori was left standing there in silence. Her legs were shaking furiously as they so often did—but not from fear. Not from the unbearable anxiety that seemed to press on her every waking moment.

She was shaking for an entirely different reason. But she didn’t know what it was. She didn’t have a word for this feeling. Suddenly, her grandmother’s stern decree that she must not speak to her brother uninvited seemed so meaningless. For the first time, Nori realized what an order truly was: a collection of words. Simply that.

Maybe this was what hope felt like. Real, tangible, hope.

She raised her index finger to her lips and traced them as she mouthed out the syllables to the name.

She let out a breath she hadn’t even realized she’d been holding. A breath that seemed bigger than her whole body. And then she said the name again.

She could say that name every second of every day, so long as she lived, and never tire of the way it felt on her lips.

She didn’t even realize that she was laughing until the sides of her jaw began to ache. She bit down on her finger to try and stifle it, but it was no use. The sound leaked out and echoed about in the high‑ceilinged room. If it continued much longer and she was heard, things would go very badly with her in the near future. And yet she continued to laugh.

The dress was a stunning shade of lilac purple. It had puffed short sleeves and a collar that was trimmed with white lace. The hem, which fell just above her ankles, was trimmed with the same lace. She also received new white socks that she could pull up to her knees. She would pair the dress with her sky blue ribbon. She agonized over what to do with her hair. Today of all days, she needed it to be straight.

She ran the brush against her head savagely, pulling out entire tufts of her curly brown hair. The snarls fell to the floor. Akiko frowned at her.

“Maybe I should do that, little madam.”

When Nori was finished brushing, Akiko wove it neatly behind her head in two braids that she then coiled together to form a bun at the base of Nori’s neck.

Nori inspected herself in the mirror. It would have to do. She had only so much to work with. It served no purpose to get up‑ set over the things she could not change.

At least for the time being, she would accept it. “Is he here yet?”

The city depicted in To Kill a Mockingbird just elected its first Black mayor. 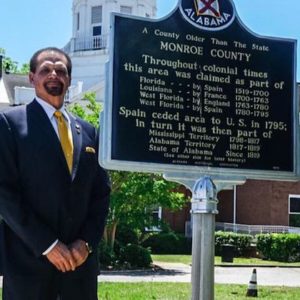 The city depicted in To Kill a Mockingbird just elected its first Black mayor. When Charles Andrew was a boy in Monroeville, a city in Alabama that today numbers under 6,000 residents, he used to watch...
© LitHub
Back to top