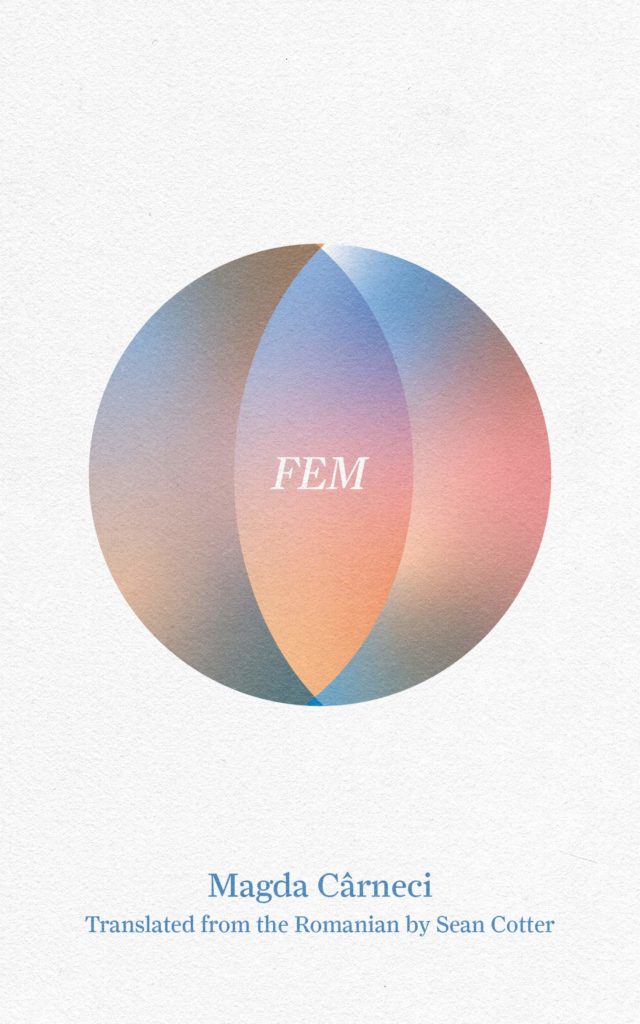 The following is excerpted from Magda Carneci's novel, Fem, translated by Sean Cotter. Carneci is a widely acclaimed writer, translator and art critic in Romania, where she has become a leading voice among the gifted group of poets who began their careers under the decline of Communism in Eastern Europe. She is the recipient of prizes and grants from the Fulbright Foundation, Getty Trust, and European Union; and in 2013, she won the "Opera Omnia" career prize from the Romanian Writers' Union.

I sat there, on the green bench in the city park, in the desolate and luminous morning, thinking about myself for the millionth time. Why wasn’t it working, what was wrong with me, where did I go wrong? I stared without blinking, almost hypnotized, at the sycamore trunks stained white and brown, damp with dew. Why was I not satisfied with myself, what was not right? The bench was old and rickety, the green paint was peeling, and underneath you could see a lighter color, whitish-yellow, like an old leper.

Then I stared for a long time, hungrily, at my young body, my hands, arms, chest, I passed quickly over my abdomen, slowly over my legs. I studied my pointed white shoes, as though I were seeing them for the first time. At that moment, a brown ant was hurrying over the tip of the left shoe. What is happening, why aren’t I right with myself, what have I forgotten, what don’t I understand? Obsessively, the same thoughts passed through my mind, as my unsettled gaze rose over the transparent nylon socks wrapping my thin calves, then the gently curved thighs under the white dress I had on. I drew my eyes slowly, more and more curious, over my womb, domed somewhat, then I came to the bodice, I held my gaze on my breasts, as though I were surprised by their round crests, beneath the dress. For a second I imagined my small, flat sex, pressed between my thighs, indifferent, providing me no sensations. Then I embraced myself in a single gaze, head to toe, seated politely on a green and slightly damp bench. I tried to understand my body, to love it. It seemed so strange, this body which enclosed me as though in a hermetic box, this liveried and absurd body, as though it had grown by itself, without any effort from my part; I almost couldn’t recognize it, it almost wasn’t mine. A kind of surprised pity passed through me, mixed with disgust. Who had stuck me in this pinkish-white package, from which I could never extract myself? Who had put me, without the possibility of escape, in this uniform of flesh, bone, and hair, with limbs that ended in ridiculous protuberances, with hands and feet that ended in claws?

I looked around me at the park. Noisy packs of students skipping school passed down the path in front of me, then an older man with a cane and white straw hat, two old women hauling a voluminous sack, a nanny pushing a bright, white stroller. Young couples passed, kissing hungrily, almost biting each other, then some stumbling drunk soldiers, and a lone high school girl, small and clutching her elbows. I stared at each of them in turn; I saw another old woman, a lady in a hurry, another girl. Young women, like me, timid and trembling like reeds, mature women sure of themselves, like proud, multicolored battle towers with feathered turrets, then aged women, resigned like sad, smoldering ruins. I stared at them, marveling at their existence, that women existed, like me, many women, so many women, it seemed so bizarre . . . this multitude of versions of me, these almost identical copies . . .

I sat there, on the green bench in the city park, in the desolate and luminous morning, thinking about myself for the millionth time.

Their existence seemed more incredible to me than the existence of men. Them I accepted, so obvious, massive, self-important, self-evident. Weren’t they the important ones, the true and the strong, as my father would say? But women, how could they exist? And for what? This something so incongruent, fragile, so mixed-up and hidden . . . I looked at them from the front, the side, the back, I marveled at how they moved freely through space, forced by no one, independent of me, the surprising, undulating forms of their bodies. At once beautiful and odious. Extravagant and base. Exhilarated yet pitiful. I looked at myself again, wrapped in a white dress, and I could not stop wondering at the fact that I existed, in this impossible form, one so contradictory, unacceptable, painful. And it made me ill, I felt an empty spot under my diaphragm, in my solar plexus, just as I did whenever I was in some physical danger, or facing some difficult and important decision. Something was not right with me, that much was clear; something was missing. But what, exactly?

On the green bench. In the park. Where did this evil come from? I repeated the question in my head, dizzy, holding myself with my arms as though I were suddenly cold. Why don’t I like myself, what can’t I accept, what am I missing? Where did I get the idea that I had made a mistake somewhere, that I had forgotten something important? Sometimes I understood myself without a sex, as though I woke up in the morning like a newborn with nothing between my legs, only to remember later that I have to put a costume on, not even mine, even though I keep it at my house. The costume is arcane and complicated, uncomfortable but luxurious, full of skirts, bows, zippers, embroidery; it is a costume I have to take care of constantly, to brush, clean, and repair. A borrowed costume, one I have to employ with a certain seriousness if I want to play my part, my part—who knows who chose this part for me, who gave me this burden, who trained me, who forced it into my reflexes and brain. And precisely the strange, glossy gazes of the men I encountered on the street each morning abruptly reminded me to play the part again, to identify myself with the uniform I brought from home. Clearly, by now I don’t even know if I could play another part; I’ve been in this bizarre costume, some even call it beautiful, from the start; I could have been born a dog or a cat, a sheep or a wild goat, a platypus or an orangutan, a crocodile or an elephant, I could have come into this world an earthworm or a bee, or a sparrow, or a snake—so what didn’t I like about my young, supple body, what was wrong with me, what had I forgotten, what was my mistake?

I sat there for a long time on the rickety, green bench, watching people pass. There were men and women and children, women, women, many women. I was also a young woman, like the others, one of hundreds of women, one of thousands and millions of women in this hypnotic reality, and I could not grasp it. This curious division of one person into two. Like a gold coin broken awkwardly into two nonidentical halves. And yet identical. No, nonidentical. And yet the same. Something absurd, un-understandable, something unbearable. Like a black flash that burns through the neural filaments, like a blade that cuts, that cleaves the brain, splits what was unified and harmonious, whole, exultant, the luminous, perfect sphere. The park paths spread like a labyrinth around my green, rickety bench, the trees cast blue shadows over the freshly mown and watered lawn; then, glancing down, I noticed a kind of grand, multipetaled rose in the irregular cracks in the asphalt. I stared, more and more absorbed, at these almost perfectly circular cracks, full of dark dust and bits of grass, unraveling from a deep, unseen center, like a flower that shows and at the same time hides its obscure, tenebrous core. An ashen, asphalt rose, like a drop of gray lava, compressed and solidified, over whose convolutions my mind began to drift, undulating, expanding. Lifting my gaze, I saw a vaster, vaporous rose in the white clouds in the sky, their irregular edges tinged with gold and pink, slowly spreading, unraveling like a quiet floral explosion against the luminous azure expanse.

On the green bench. In the park. Where did this evil come from? I repeated the question in my head, dizzy, holding myself with my arms as though I were suddenly cold.

Then a woman passed my bench, she was tall, haughty, a strangely beautiful woman. Her beauty shocked me, for a moment I couldn’t breathe. Her face showed an unbelievable harmony, unbearable to look at, impossible to withstand, so complete, such distinct nobility. As though in a trance, or by magnetic attraction, I rose from the bench and followed this proud woman, I followed her down the paths of the park. Her figure, her gait reminded me of something, something mysterious, something I knew long ago, but what? As I followed her at a distance, an intense and strange image suddenly erupted from inside me; in my mind, in a flash, I relived a fragment of an old dream: on the peak of a perfectly conical mountain, not far away, a tall and haughty woman, a goddess—draped in a purple cloak with gold embroidery, outlined by a narrow halo of light—waved to me, she beckoned me to climb toward her, she called me to her.

When the flash of this inner vision had passed, I saw the tall and haughty woman again, moving quickly away, her perfect figure disappeared beyond the wrought iron gate at the park’s main entrance. I ran after her, I took the street I thought she had taken, but I could not find her. She was gone. I ran through the streets for a while, the idea of losing her seemed unbearable, I felt that inside her, in that woman, was a hidden key, a vital answer, something crucial for me, but what? Then I became tired, I stopped, I gave up. I turned slowly back toward the park. I looked around at people’s faces, I thought I spied fragments of that magisterial beauty in the face of a teenager, in a child’s gaze, but it was not the same, it was not her. I seemed ridiculous even to myself, I was like a lover who thought he saw his lost love everywhere, in every woman, even in men, in all the people he encountered, as though a precious hologram were broken into thousands of fragments and shards, and every shard held a bit of an image, an allusion, a glimpse of the whole face, of the face of his beloved.

In the end, exhausted, I turned back to my green park bench, I laid down and drifted off to sleep. I don’t know how long I was asleep, in the cool air of the bright and sunny morning. When I opened my eyes again, a few meters before me on the path, I saw another woman, completely different from the one I had just lost. She was a squat housewife, with a round, hard face, a square body, and modest dress, holding hands with two children, two girls, in yellow and white overalls. And I remembered an old, yellowed photograph, of a young woman holding two children wearing overalls, a photo I had hidden in an old diary and forgotten. And in that moment, something broke inside me, and an avalanche of images flowed from within. Something like a movie flooded me inside. 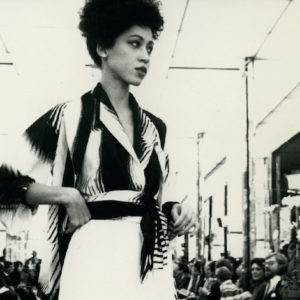 Taking Fashion Seriously:
A Critical Reading List Bemoaning the lack of a critical approach to fashion is hardly a novel idea. As early as 1845, the French novelist and literary...
© LitHub
Back to top