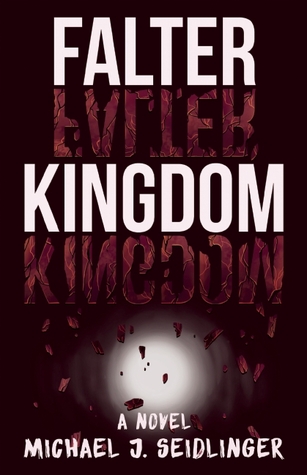 The following is from Michael Seidlinger’s novel, Falter Kingdom. Seidlinger is the author of a number of novels including The Strangest, The Fun We’ve Had, and The Laughter of Strangers. He serves as Electric Literature‘s Book Reviews Editor, Director of Publicity at Dzanc Books, and Publisher-in-Chief of Civil Coping Mechanisms, an indie press specializing in innovative fiction, nonfiction, and poetry. Falter Kingdom is his first YA novel.

I don’t realize I’m asleep until I fall twenty stories from the top of a building and I’m able to stand back up without a scratch. I look like shit, but it’s only because the dream is right out of a movie and the main character in that movie gets ripped up, bleeding and bloody, but keeps running.

I keep running, being chased by what I won’t see until later, when it’s that part of the movie where the main character ends up cornered, dead end, and he’s frantically looking for some other exit.

But there is no exit.

The only way I really can leave this is if I wake up. When you’re in the dream, you think that you can just think, “Wake up,” and you’ll wake up.

I think that but it only makes the dream seem more real than it is.

But I keep running.

And I love this.

It goes from one city street to the next, and I’m running up walls, doing parkour like a pro, and my heart just has to be beating like crazy. I’m sweating in bed and it’s cold as hell in my room. I mean, I know what’s happening.

This is from one of my favorite action movies.

If I follow it to the very end, talking right to that gunshot, I wonder if I’ll die too. Or just wake up. Something about this dream is just too real. I pinch myself and I feel it. I’m not waking up.

Run then, right? Nothing else to do but run.

It’s all so exciting, even though I know how it’ll end.

At the next corner, I turn left and end up dodging traffic. Going against all these cars, it’s a display of athleticism that I could do in my sleep. Ha, get it?

Anyway, one truck makes it hard to just duck to the side, so I jump forward, grabbing the grille of the truck, and run up the windshield to its roof. I’m lying prone, riding the truck until I see a bridge.

The best part of the movie is when the main character does this huge jump from the moving truck to a bridge, hangs there, and then free falls to the street in, like, ten seconds.

Being the one who does all this is insane. It happens so quick it’s like a slideshow of various pictures. It ends with a roll forward, a look in the direction of another wave of traffic, and then a sprint down the way I came.

This time it’s a mad rush all the way up some steep incline. This city is swarming with people who shout at me. The main character’s on the phone the entire time, shouting at people. I like that I get to shout at people.

Sweat drips down my forehead like it’s been raining like crazy. It’s all for effect, but it seems so real, especially when I have to make a sharp right turn around one corner, into an alley where I run up a brick wall, grab on to a ledge, and start climbing the ten-story building.

I’m not really afraid of heights, but looking down the way the main character looks down in the movie really makes that sinking-stomach feeling intense. Really intense.

Part of me wants to drop again, just to be able to do that free-falling thing again, to get to stand back up and not be hurt at all.

But that’s not the way the scene goes.

I’m on the roof of a building. From above, a helicopter shoots at me, Enemy of the State style.

Run, run, run—I get that tunnel vision when I put everything in the next jump, the one where there’s that awesome shot of the main character bridging the gap, jumping across. It’s just like that in my dream. That shot from the ground floor, looking up so that you see my body fly across, barely making it to the other side.

It’s almost that part where the main character gets shot.

I climb down the side of the building, Front Street intersection right there, and the person who was on the phone, the car, is right there. Just like in the movie, my dream zooms in to show the car parked and the person waiting, all anxious, to drive off and start the car chase part of the movie.

But in the movie, it doesn’t happen with the main character.

The main character gets shot and it’s this big deal, big twist, that some people love and some people hate.

In my dream I run down that alley.

I keep running, but when someone points and shoots their gun, I’m not in the alley anymore. The sides of the buildings blur into a sort of darkness. I see trees and then I see nothing.

I keep running but the dream’s taken a weird turn. It’s really not the movie anymore. It’s a tunnel. It’s that tunnel. It’s nothing but that one moment when I ran and felt everything change in an instant. I know where I am but I can’t say the name.

But the dream keeps going, running in the dark.

And then it’s just me and something else, and we’re sitting at a table. It might as well be the kitchen table at my house. I’m sweaty and achy, and I’m feeling as if I really fell from a building and somehow survived just so that I can be in this kind of pain. But the pain is distant enough that I can kind of say, “Wow, this sucks,” without actually having to be rushed to the hospital.

I’m sitting at the table alone. Sitting there, realizing that I’m sitting and doing nothing at a kitchen table. In a dream. There’s something wrong about going from an action scene from a movie to sitting at a table.

But that’s how this goes, I guess, and it’s now that I realize that I don’t have a lot of control over my dream. I’m being led by the dream.

Facing me is an empty chair. The chair is empty until it’s not.

And then I’m staring at a mirrored version of me. But something about it is different. It has the same voice, my voice, but it doesn’t have to use it. It speaks without speaking and it breathes without needing to breathe. It matches me as much as it can, but it also wants to be me.

Then I really look and see what it is.

I’m kind of scared, yeah, but if I keep looking, keep thinking about it. I get kind of curious too. I can’t help myself.

I ask a question, and I can hear myself say it aloud.

The question, it’s the one that comes to mind first, the question maybe everyone would want to know the most: “Where do you come from?”

I’m talking in my sleep.

It kind of all just happens, the answers falling into place like stuff I already knew but forgot up until asking the question. It’s here, and it doesn’t know where it came from. It only knows where it currently is, and in this case, it’s in my dream.

It tells me, “I’m standing next to you.”

Part of me wants to say, But you’re sitting across from me.

It breathes just to show that it’s real.

I can hear the sound of scratching even though I’m still sitting in this chair, hands folded on the table.

I hear the bedroom door open and close, then the words, “I want to know why you stopped running.”

What do I say to that? I don’t really know what to say.

It says, “There’s an end to the tunnel.”

I have to ask, but this time I just think the question instead of saying it: “Is that where you came from?”

It doesn’t seem to want to reply.

More breathing, and then the room gets even colder.

I should be getting more scared the longer I speak to it. Those pieces of information—stuff told to me by Father Albert and others—warn me not to make contact with the demon. Don’t make contact. Don’t speak to it. But does a dream count? What about a nightmare?

And then I’m thinking, “Can it hear my thoughts?”

Then I think, “What is your name?”

The name it gives, it’s pieced together from a half-thought I had once, when I thought it would be cool to drop my name and just go by a single letter.

I used to think it would be cool to be called “H Warden.”

It calls itself “H.”

And I know it’s only because it looked into my thoughts and picked out something as close to my own name as possible.

One thought keeps pulling me aside. It keeps telling me, the thought, to be afraid. Be so damn afraid. And wake up. Stop contacting it.

But H is right there, looking as close to human as possible.

I hear myself ask, “I take it you’re all about causing shit, right?”

H doesn’t seem to give an answer.

We sit there—the dream frozen, paused—but I find it still kind of awesome. It’s nothing I’ve ever experienced before. It’s like talking to yourself, but instead of just getting the thoughts you know and the words you’ve already said, you actually get something in return.

New information, new ideas, new feelings jump into the spaces between your own thoughts.

H then tells me, “You are going to wake up now.”

But before I do, I have one other question: “How is this possible?”

And then I wake up.

My sheets are damp. I touch and smell them. Nope, didn’t piss my pants. It’s sweat. I look around the darkened room. I check the time.

I feel tired. That’s nothing new. I yawn and sort of say out loud, “Does this feeling tired shit get any easier?” And then I hear a scratching noise coming from the other side of the wall, almost like I’m getting an active response.

I sit up in bed, wondering if I should be worried.

Out of breath and really kind of lost, I don’t want that dream to stop. I want to sleep but I feel like it won’t be possible. No matter what I do to try to sleep, it’s that same sort of tossing and turning where I end up sort of asleep but not really anywhere close. And then it gets to be morning and, you know, back to school.

Another day, but I can’t help but feel like I’m taking back some of what’s changed since running the gauntlet. I can feel my grip on giving a shit really finally . . . faltering. And I’d like to think that it’s a good thing.

From FALTER KINGDOM.  Used with permission of Unnamed Press. Copyright © 2016 by Michael Seidlinger. 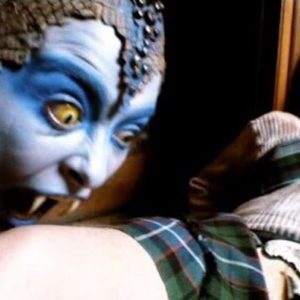 Hemingway vs. Ken Russell: Or Why You Should Compare Apples to Oranges Ken Russell's 1988 vampire goof Lair of the White Worm is better than Ernest Hemingway's 1952 classic The Old Man and the Sea....
© LitHub
Back to top