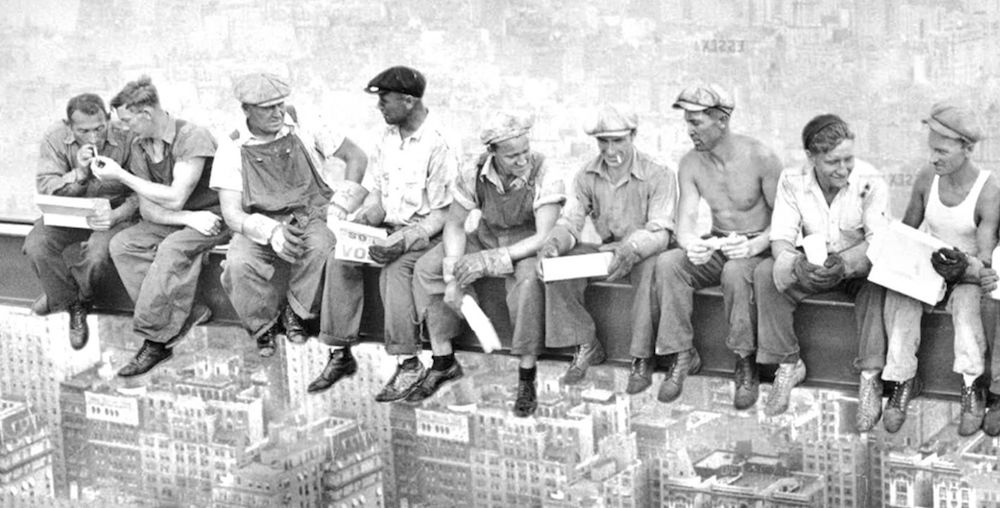 False Freedom: Sharing the Scraps from the Perilous Gig Economy

Steven Greenhouse on a Different Kind of Worker Drone

It’s often called the sharing economy, and it’s often hailed as the liberating economy of tomorrow. Silicon Valley executives sound like giddy cheerleaders in championing apps like Uber, Lyft, TaskRabbit (home repairs), Instacart (grocery delivery), and Fiverr (freelance services). These boosters say these apps have ushered in a great, new era for both consumers and workers. Their message is: Bedraggled workers of the world no longer need to be chained to an office or a nine-to-five job. These apps will free workers to be their own boss and to cash in by sharing their talents (or their car) with a world full of customers via the internet.

No longer need workers be wage slaves or worker drones. “Think Outside the Boss,” these apps boast. You can work when you want and where you want, they say. “Why work if you can turk?” proclaims a coffee mug from Mechanical Turk, an internet marketplace where businesses offer, and workers accept, piecework jobs.

It all sounds great. But many Uber drivers and Mechanical Turk workers say that app-based work isn’t all it’s cracked up to be and that these gigs are often neither liberating nor lucrative. It feels less like sharing, and more like a new form of low-paid work, many gig workers say. (Gig work originally referred to jazz club musicians in the 1920s, but the term “gig economy” didn’t become popular until the Great Recession as a way to describe workers juggling several part-time jobs or “gigs.” Nowadays the term refers increasingly to app-based jobs.)

Many gig workers complain that their pay often averages less than the minimum wage, some days as little as $3 an hour, after subtracting expenses. Many also say they need to work 60 or 70 hours a week to eke out a living. They are “less microentrepreneurs than microearners,” Natasha Singer wrote in a New York Times profile of a gig worker. “They often work seven-day weeks, trying to assemble a living wage from a series of one-off gigs.” The former labor secretary Robert B. Reich quipped that it shouldn’t be called the sharing economy but instead the “share the scraps” economy.

Critics scoff at the term “sharing economy” in part because there often isn’t much sharing involved. If you’re driving the 35 miles from your San Francisco apartment to Palo Alto, it’s one thing to offer a friend a ride for free—that’s sharing. But it’s quite another thing for an Uber or Lyft driver to charge someone $50 for that trip—that’s being a taxi or livery service, even if Uber insists on calling it “ride sharing.”

Many Uber drivers and other gig workers sing the praises of their platform-based work, saying it gives them flexibility and a good income. “I don’t typically love driving, but the money is so good,” said Brittney Barber, 35, about her job driving three or four 12-to-16-hour days each week for Uber in San Francisco. (She was living 190 miles from San Francisco, and the days she drove for Uber, she slept at a friend’s house there.)

Many who don’t earn enough on their main job turn to app-based work to make ends meet, or to make extra money to buy a car or take that longed-for vacation. A McKinsey study found that 30 percent of platform-based workers do gig work out of necessity or because their other income leaves them financially strapped. Laid off from an $80,000-a-year corporate job, Mary Acosta began driving part-time for Uber in Sarasota after sending out 70 job applications to no avail. “I’m not getting rich by any means,” Acosta said, “but it’s allowing me to eat, basically.”

One Mechanical Turk worker commented in an online forum during the Great Recession, “I have a degree in accounting and cannot find a real job, so to keep myself off of the street I work 60 hours or more a week here on mTurk just to make $150–$200. That is far below minimum wage, but it makes the difference between making my rent and living in a tent.”

Tech industry executives talk up these jobs in what is variously called the digital economy, the on-demand economy, or the peer or peer-to-peer economy. Lukas Biewald, the CEO of CrowdFlower, a crowd-sourcing labor exchange like Mechanical Turk, said these apps bring “opportunities to people who never would have had them before . . . where anyone who wants to can do microtasks, no matter their gender, nationality, or socio-economic status, and can do so in a way that is entirely of their choosing and unique to them.”

This dynamic, relatively new segment of the economy has gotten lots of attention from the news media, investors, and the public. There’s a fierce dispute, in fact, over how many online gig jobs there are, largely because it’s hard to define who is a gig or digital on-demand worker. Workers who do work through online platforms like Uber and TaskRabbit account for 0.5 percent (750,000) of the nation’s workers, according to a 2016 study by two leading labor economists, Lawrence Katz and Alan Krueger, although they later pointed to a 2018 study estimating three times as many, 1.5 percent of the nation’s workers, working through digital platforms.

Like globalization, the app-based economy often pulls down wages in the industrial world, even as it creates new opportunities for workers in poorer nations.

Sara Horowitz, founder of the 300,000-member Freelancers Union, says there are millions of such workers in the United States. On the website Care.com alone, nine million people have registered to care for the elderly, babysit, or walk dogs. Some suggest that all nine million should be considered digital on-demand workers, but others say that makes no sense because those workers don’t rely on platforms hour by hour like Uber drivers, “Turkers,” or TaskRabbit workers.

The digital on-demand economy resembles globalization in that it has created a larger, and often a worldwide, labor pool, putting workers in the United States, Canada, Britain, Germany, and other industrial nations in competition, via the internet, with workers in India, China, and elsewhere. Like globalization, the app-based economy often pulls down wages in the industrial world, even as it creates new opportunities for workers in poorer nations.

An International Labor Organization (ILO) study found that in India the median pay for Mechanical Turk workers is $1.67 an hour, putting downward pressure on what Turkers in the United States earn. Turkers in India might compete with those in the United States for such jobs as transcribing audio or identifying what is in photographs. For American Turkers, median pay is $5.63 an hour, the ILO study found, while the Pew Research Center found it’s $4.99 an hour. Either number is far below the federal minimum wage of $7.25 an hour.

With many Americans desperate to earn more and willing to do gigs that offer paltry pay and no benefits, “you are getting people to self-exploit in ways we have regulations in place to prevent,” said Dean Baker, co-founder of the Center for Economic and Policy Research in Washington. He pointed to the myriad laws and regulations that generally assume that workers are employees covered by long- standing protections.

Many corporations turn to crowdsourcing sites because getting work done through these apps can cost less than half as much as through typical outsourcing, causing a downward pull on workers’ pay, as we’ve seen. For example, to translate a 22-minute video from English to Spanish, a professional translation firm in New York proposed charging $1,500, while on the Upwork platform, five skilled freelance translators from Argentina, Brazil, Indonesia, Mexico, and the Philippines—three of them with five-star ratings—offered to charge just $22 to $33. Biewald, CrowdFlower’s CEO, has acknowledged how low wages can go, saying, “We end up paying people about $2 to $3 per hour. . . . It really depends on the level of quality that you need.”

Biewald believes these platforms offer another big advantage to employers: they make “dismissing” workers less painful (hardly the case for those who are red). “Before the Internet,” Biewald said, “it would be really difficult to find someone, sit them down for ten minutes, and get them to work for you, and then fire them after those ten minutes. But with technology you can actually find them, pay them the tiny amount of money, and then get rid of them after you don’t need them anymore.” Biewald is part of a particular breed of Silicon Valley wizard who seems far more concerned about getting his algorithms right than about getting things right for his workers.

Beyond citing low pay and the dearth of benefits, platform workers frequently complain that they’re isolated, doing work in their basement, bedroom, or car. Oftentimes, they have no communication with other workers or with their managers (which are often just apps or algorithms). These workers have an especially hard time banding together and making themselves heard by their employers, and by the world. There are some innovative efforts, however, to bring app-based workers together to exercise their collective voice and clout. 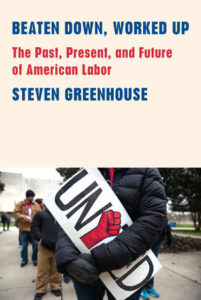 Steven Greenhouse was a reporter for The New York Times from 1983 to 2014 and covered labor and the workplace for 19 years there. He also served as a business and economics reporter and a diplomatic and foreign correspondent. He has been honored with the Society of Professional Journalists Deadline Club award, a New York Press Club award, a Gerald Loeb Award for Distinguished Business and Financial Reporting, and the Hillman Prize for Book Journalism for his book The Big Squeeze: Tough Times for the American Worker. Beaten Down, Worked Up is available from Knopf. 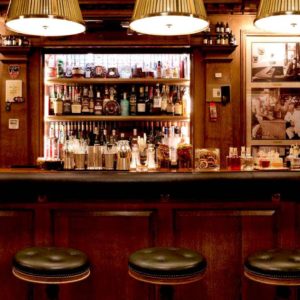