Silicon Valley-backed “clean meat” is now everywhere. Our guilt over eating meat, we are assured, can be assuaged by consuming nuggets and patties made from plants. This may tempt some, but faux meats are not progress, they are a distraction.

The phrase “clean meat” is itself revealing. It was first used by high-tech entrepreneurs wanting to “disrupt” the food system status quo. Multinational corporations are now putting on the “clean” mantle as they rush to introduce meat-free products while attempting to distance themselves from their own troubled legacies. The US’s largest confinement pork producer, Smithfield, a company I have personally litigated against in federal court over water and air pollution, recently created a vegan brand it calls “Pure Farmland.”

To me, this all illustrates how wrong faux meat is as a strategy for fixing the food system. I’ve always considered farming a profession practiced with dust on your jeans, hay in your hair, and dirt under your fingernails. At its best, farming is a daily communion with nature that brings the deeply satisfying accomplishment of nourishing people with nutrient-rich, wholesome food.

Plant patty manufacturers want us to believe we can derive the nutritional benefits and gustatory pleasures of meat without the dirty or messy parts. They imply there’s no water or air pollution, no blood. Most importantly, by choosing their “clean” option you can avoid the moral taint of consuming animal flesh, for which there is no longer a need, they suggest. Modern food technology, it’s implicit, enables us to advance beyond physiology and the brutal ways of our ancestors.

But is this really the choice we are facing? And do faux meats live up to this promise? Let’s start with health.

Ethan Brown, founder of Beyond Meat, is convinced his formulation offers a more perfect food than nature provides. His spokesperson has said, “Improving human health is a core tenet of our brand.” In response to such assertions, a flurry of articles has evaluated faux meat’s health claims. Nearly all have concluded this new generation of meat substitutes cannot legitimately be called healthy. Most have focused on the saturated fat content (about the same as red meat), the sodium (very high), or the genetically modified ingredients.

A flurry of articles has evaluated faux meat’s health claims; nearly all have concluded this new generation of meat substitutes cannot legitimately be called healthy.

But my concern is more fundamental. It’s about what kinds of foods we are feeding ourselves. Like mothers the world over, every day I strive to feed my family and myself tasty, health-supporting, real food. Much of my day is spent in the kitchen serving meals, packing lunches, cooking, baking and canning. Knowing where our food comes from and how it is raised is a priority. The staples of our diet are fruits, vegetables, greens and herbs from our garden and local farms. We eat grass-fed beef and pasture-raised turkey from our ranch, organic eggs from hens in our neighbor’s backyard, fish, oysters and crabs from local fishermen that we personally know. Our purchasing and bartering deepen friendships and strengthen our local food economy. In stark contrast to this system of transparency, trust and relationships, high-tech faux meats are merely the latest iteration of industrial food. To me, they are utterly unappetizing and unappealing.

There is no question these products should be labeled “processed,” and a number of nutrition experts call them “ultra-processed.” The best-known faux meat companies in the United States have genetically modified components and over twenty total ingredients. “Their proteins are isolates, extracted mechanically from whole soy and peas. Their fats are industrial vegetable and seed oils,” notes a recent article in The New Republic. The article goes on to suggest these novel meat alternatives may even deserve their own—uber-processed—category:

In fact, companies like Impossible and Beyond have arguably created a new, higher tier of ultra-processed food. As Engadget noted, “A Cheeto or Twinkie is unambiguously synthetic.” But these fake-meat products are engineered, specifically, to fool our senses into thinking they’re whole foods—and then marketed, by meat companies, to change our language to reflect the trick.

Ultra-processed foods, collectively, are coming to be regarded as the single biggest dietary problem in the developed world. The New Republic further points out that earlier this year, “the National Institutes of Health released a landmark study showing that America’s obesity epidemic is driven primarily by ultra-processed foods,”—the same month that “two large European studies linked ultra-processed food consumption to cardiovascular disease and death.”

Even more compelling than this sort of research is common sense. At some level, we all know our bodies have evolved with certain kinds of foods and have not evolved with engineered edible products. In his book Nourishment, animal nutrition expert Fred Provenza argues the foundation of a healthy human population is “nutritional wisdom,” where individuals develop the capacity to recognize foods that satisfy their particular dietary needs. Provenza argues diets should be based on biochemically rich foods, connected to our landscapes and cultures, taught by mothers and elders to the young, for which we develop “flavor-feedback relationships.” Faux meats fail this in every respect. When such links are broken, “entire ecosystems and cultures become dysfunctional,” Provenza writes. Equating “clean” and “pure” (another word used to describe faux meats) with good for food and farming is not just nonsensical, it’s wrong.

Faux meat manufacturers also boldly promote their products as planetary saviors. Pat Brown, founder of Impossible Foods, told the New York Times in 2019, “Every aspect of the animal-based food industry is vastly more environmentally disruptive and resource-inefficient than any plant-based system,” as he pronounced, yet again, his aim of eliminating animals entirely from the global food supply by 2035. The company’s website claims its products have “a tiny fraction of the environmental impact” of meat, using far less land, less water and emitting much lower levels of greenhouse gases. The company often compares its products to mainstream meat production. But in June, it grabbed media attention by directly attacking regenerative livestock farming as the “clean coal of meat.” The implication was that meat is inherently environmentally destructive no matter how or where livestock are raised.

Many of us in the regenerative agriculture community responded. We noted that a leading cause of U.S. water pollution for the past two decades has been large-scale, chemical intensive GMO monocrop production of exactly the type from which Impossible and other faux meat companies source their ingredients. And, we pointed out that ecologically optimal farming involves animals. Getting rid of cattle is throwing the baby out with the bathwater. The best models of regenerative farming demonstrate that animals are indispensable.

Will Harris of White Oak Pastures in Blufton, Georgia, was particularly incensed by the Impossible Foods attack. His wonderful farm, which I have had the distinct pleasure of visiting, is a remarkable example of agricultural, ecological, and economic diversification. Each year, he and his family have introduced new layers of complexity to their farming operation and new foods and household products. A recent independent environmental audit at White Oak Pastures concluded its beef operation sequesters more carbon in the soils than it emits. Thus, White Oak is being modest in referring to its beef as “carbon neutral.” They have created an elegant real world illustration of my favorite slogan, ‘It’s not the cow, it’s the how.’

I believe mainstream meat production needs improvement. But this is precisely why faux meats are such a distraction. They get people like Bill Gates and other techies and their investors all excited. This siphons the energy, media attention, and money away from the work that really needs to be done to fix agriculture. We need an all-hands-on-deck effort to transform mainstream agriculture from extractive to regenerative. Ironically, true disruption of industrialized agriculture isn’t coming from people like Bill Gates. It’s coming from people like Will Harris and North Dakota farmer Gabe Brown, who eloquently documents his journey from conventional to regenerative farmer in the book Dirt to Soil.

Special mention should be made of lab-grown meats, the techiest of the high-tech faux meats. Despite investor giddiness, the cost and practicality of creating lab conditions to culture meat is in itself a serious problem that may never be overcome. But the “yuck factor” is even more grave. An in-depth industry profile in Wired magazine in 2018 noted the sector has a “messy problem.” “None of the major players have managed to grow meat without using animal serum—a blend of growth-inducing proteins usually made from the blood of animals. The most popular is fetal bovine serum (FBS), a mixture harvested from the blood of fetuses excised from pregnant cows slaughtered in the dairy or meat industries.” Lab meat is now creating a high demand for this serum. Recently, I heard that some US slaughterhouses now offer incentives for farmers and ranchers to bring cull cows to slaughter pregnant. This makes my heart hurt and stomach ache.

Twice in recent years, I was invited to share a public stage to debate the merits of faux meat with Impossible’s Pat Brown. To prepare, I watched some of his interviews. Most telling to me was Brown’s admission that he gleans little pleasure from eating. Food, he said, is just fuel. This is kind of sad, actually. For me, food is so much more than fuel. It is a fundamental sensual pleasure. It is the foundation of vibrant health. It connects us to our families, communities, cultures, and histories.

While perhaps soothing worries about health and the environment, faux meats are definitely not the answer. They won’t make us any healthier and they won’t make us happier. They will only further entrench the industrialized food system at the core of our ecological and human woes. We need a much more radical and real solution that gets to the root of how we farm and how we eat. Regenerative farming with livestock that looks like nature and produces nutrient-rich foods is that solution. And it’s the only one that will work. 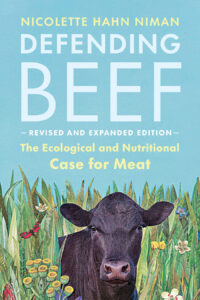 Nicolette Hahn Niman served as senior attorney for Waterkeeper Alliance, running their campaign to reform the concentrated production of livestock and poultry. In recent years, she has gained a national reputation as an advocate for sustainable food production and improved farm-animal welfare. She is the author of Righteous Porkchop and Defending Beef, and has written for numerous publications, including the New York Times, Los Angeles Times, HuffPost, and The Atlantic online. She lives on a ranch in Northern California with her husband, Bill Niman, and their two sons.

The Human Behind the “Monster.” On the Misrepresentations of Forensic Psychiatry 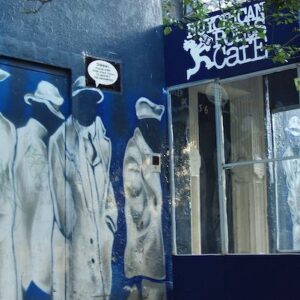 In 1973 Miguel Algarín, a former professor of Shakespeare at Rutgers University, brought together a group of people, including...
© LitHub
Back to top
Loading Comments...