Fact, Fiction, and When a Novel Crosses the Line

Joanna Scott on the Illusive Boundaries of Truth and Literature

Picture a packed auditorium, evening darkening the windowpanes, a spotlight directed at the podium. It is around mid-October, 1983. I am in the audience, eagerly listening to the lecture.

Chance has landed me in a seat next to one of my teachers, a famous writer widely celebrated for his hilarious satire. I have read a collection of his stories and am in awe of his wit and verbal command. He has read my juvenilia and expressed his disapproval. At this point, a few months into the semester, I am tongue-tied, afraid of confirming his apparent impression that my admission to the program was a mistake. I am glad the lecture has started right on time and thus spared me from having to come up with any conversation beyond brief pleasantries. Now I am making an extra effort to sit up straight and convey my powers of discernment with my intent expression.

The speaker at the podium is a balding man with a dark beard. He is talking about what he calls “the Informer Principle.” He says something about liberalism, McCarthyism, and the falsification of history. He spends several minutes describing the trial of Ethel and Julius Rosenberg.

Soon I forget the famous writer beside me and am utterly absorbed by the lecture. Being an aspiring writer myself, I am in search of sturdy subjects to explore in a novel. I start a dozen different novels in my head every day. As the lecture progresses, so do my plans for the new novel I am suddenly planning to write.

The lecturer is Victor Navasky, editor of The Nation and author of Naming Names. The writer beside me is Robert Coover, author of, among other notable works of fiction, a novel titled The Public Burning. I have the novel on my shelf, but I haven’t taken the time to read it yet, or even read the jacket flap, so I remain unaware that it fictionalizes the very subject Victor Navasky has been discussing: the trial of Ethel and Julius Rosenberg.

When this thrilling lecture has drawn to an end and the applause has faded, I turn to Robert Coover and announce, “Wow, what a great lecture. I want to write a novel about that!”

Robert Coover says, “I did write a novel about that.”

What I hear in my head is, You nincompoop, you should know I wrote a novel about that. Thus my training in the etiquette of fiction begins.

The main character of The Public Burning, who happens to be named Richard Nixon, keeps getting himself entangled in all kinds of fixes. There is one particularly memorable passage when Nixon is trying to make his way across Washington D.C. on foot, alone, and has to pass through a crowd that has gathered to cheer on the Rosenberg executions. Signs held high include THE HOT SEAT FOR THE ROSENBERGS—SIZZLE ‘EM! and HOME COOKING, KOSHER STYLE! Nixon imagines he sees communists everywhere, even among these bloodthirsty anti-communists. On he stumbles, heading for the White House. He warns the reader, “You’ve got to be careful in a situation like that, you have to think all those things through.” He is thinking he has safely avoided confrontation when he runs right into a boy, a “skinny little kid,” “like the waifs out of those Horatio Alger novels… Very intense and even, somehow, mysterious.” This fictional Richard Nixon usually follows his obsessions to their fatal ends, but in this passage he shows a rare moment of tenderness: “he’s beautiful, this child!” He whispers to the boy, “Don’t be afraid.” He has taken out his handkerchief and is wiping the boy’s nose when he experiences an unsettling moment of recognition. He sees the resemblance between the boy and Ethel Rosenberg and realizes that this boy is the Rosenbergs’ son. Nixon pushes him away and walks on through the White House gates.

It is a stunning moment in the novel, historically resonant but even more resonant in its fictional context. We see the character named Nixon slip and slide through paranoia into confusion and out of confusion into awareness, before he abruptly extinguishes his sympathy for the boy and resumes playing his appointed part.

The Public Burning was just one influence among many I soaked up during my apprentice years as a writer, and Coover’s Nixon took his place in my imagination alongside other characters. I didn’t flinch when I came across Houdini and Freud in Doctorow’s Ragtime. I felt increasingly the affinity between fiction and theater. It made sense that novelists would take their cues from Shakespeare, who kept imagination’s gates wide open and was just as ready to let history enter the masquerade, in the likes of King John and Henry the Fifth, as he was to give a place to Desdemona, Hamlet, and Malvolio.

I began to take a special interest in creative work that mixed documented information with invention. I didn’t much care about authenticity; what mattered was the imaginative treatment of the subject. I was convinced by Lewis Mumford, who argued in his 1929 biography of Melville that “the question to settle” about Moby Dick is not whether Melville himself could claim expertise about whaling expeditions, but rather, “Do Ahab and Stubb and Starbuck and Tashtego live within the sphere we find them?” This measure, I figured, could be used for all literary characters, whether or not there was a real character who shared their name.

It was only a matter of time before I started coming up with my own mash-ups of history and fiction. The artist Egon Schiele made his way into a novel, along with his family, his lovers, his friends. In a set of stories, I took on the 17th-century lens-grinder Antony Van Leeuwenhoek, and the 19th-century activist Dorothea Dix. I didn’t hesitate to use their actual names or to mingle them with characters who never existed.

Round about the time I was embarking on these efforts, I remember reading an exchange between the historian C. Van Woodward and Gore Vidal in the New York Review of Books. Woodward had taken Vidal, along with Alex Haley and Doctorow, to task for their failure to “respect the distinction between fact and fancy.” Vidal’s retorts were always fun to read, and in this exchange he set out to defend his fictional portrayal of Lincoln by citing his meticulous research. He went so far as to announce that he’d hired a professional researcher to double-check all his facts. The way he described his process, the fictional elements began to seem more of a constraint than a release. He explained that he was drawn “more to history than to the invented,” and that he was obliged when he wrote fiction to tell the story through someone’s limited consciousness.

I found both sides of the argument lacking. Novelists are under no abstract obligation to “respect” historical fact. Their obligation is to make their characters matter within the unique sphere they inhabit. If we want to find out about history, we should turn to historians; when we want to find out about the mind’s creative powers, let’s turn to artists. Fiction can never supplant history, nor should it. It must be understood, first and last, as false, for it’s in the heart of the invention where its peculiar truths can be found.

We may not be able to count on assembling trustworthy facts from a novel, but, thanks to books that put fact and fiction in a dynamic relationship, we just might be nudged to take a new look at the past and consider it from different angles. It might be that a novel’s cast includes figures from the past we hadn’t bothered to notice before. Maybe some of the names aren’t as familiar as they should be. Maybe that’s because these individuals weren’t considered all that important in the larger scheme, and historians never bothered to give them more than a passing glance.

Take Lee K. Jaffe, for instance. There’s no reason you should have heard of her, though she was renowned in her field back in the 1950s and 60s. She was “the voice of the Port of New York Authority” for 21 years, overseeing their Public Relations Department. Beyond a few brief biographical sketches and appearances in histories of the Port Authority, Lee Jaffe’s life has not garnered much attention, and so most people don’t realize that she is credited with suggesting in a memo that the World Trade Center be the tallest building in the world. The WTC might have been given a vastly different structural shape without Lee Jaffe’s influence, and our country’s recent history might have taken a dramatically different turn. When I came across a reference to her in an old newspaper I’d saved from the aftermath of 9/11, she caught my attention.

I like to borrow things. In recent weeks I’ve borrowed money and socks, a necklace, some books. But I do not borrow my characters from life. Concerning the character named Lee K. Jaffe, who makes an appearance in my new novel, Careers for Women, I prefer to say that I worked from her biography in the same way a painter might work from a photograph. My primary goal was to make the portrait vivid within the context of the novel. It’s an added benefit if her name stirs readers to think in fresh ways about the past and from there to reconsider the choices we make about what’s worth remembering.

Joanna Scott is the author of eleven books, including De Potter’s Grand Tour. Her novel The Manikin was a finalist for the Pulitzer Prize and both Various Antidotes and Arrogance were finalists for the PEN/Faulkner Award. She is a recipient of a MacArthur Fellowship, a Guggenheim Fellowship, and a Lannan Award. 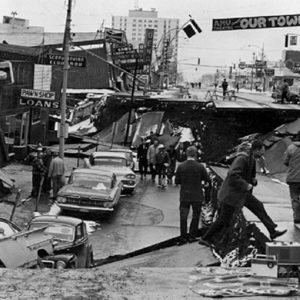 Winners of this year’s American Book Awards include Yaa Gyasi’s Homecoming, Bernice L. McFadden’s The Book of Harlan,...
© LitHub
Back to top