A POEM by Solmaz Sharif

The instrument of poetry is breath. It’s what links the poem to not only a body but its body, the author’s, the reader’s, potentially anyone’s. In a visually-dominant culture, poetry has learned to score itself, no less compellingly, across and inside space. In Solmaz Sharif’s haunting new poem, Exile Elegy, that scoring is fastidiously tailored to each imploring word or fracturing syllable. Noticeably, the word “music” is written twice in the poem as “mu-/ sic” — a choice that testifies not only to the poet’s immaculate attention to how her stanzas bend and break language, and with it, her speaker’s and our own perceptive feeling, but also I’d argue a more existential sense of split-music. The music of two cultures, two lands, two inexorable times between life and death, past and present. So “past” is dropped on its own line, hanging both by itself but commanding us to pause. Sharif, born in Turkey to Iranian-parents, shapes her lyric to tremble at the threshold of line and phrase, a gift in her hands that becomes space filled with the memory of the dead, yes, undeniably, but also, perpetually, the intimate music of someone else’s breath that happens, sometimes, even a far way off. –AF

Our phone would
rarely ring. I have no ear
for the mu-
sic here. They would
bury one then another, the eldest son dropping
in

the grave to
comfort the corpse, calling us
months later
because we were
exiles, were vagabonds, fugitives, past Sierras,
past

oil rigs
in Texas, or waiting for
the windshield
to clear of frost,
two expanding ovals where the Buick’s heat hit, our
eyes

opened to
kudzu, here where the dead can
not reach us.
Three thimbles with
her sweat, in the dresser drawer they emptied would, I bet,
roll,

clink, tongueless.
Gauze of soot, of skin sifted
off her where
she scratched her head,
licked her thumb to lift page after thin onionskin page,
cloaks

her mantle.
Portrait of Imam Ali,
dead husband,
dead son. She stuffed
plastic bags into plastic bags, clouds of them, some stuffed
with

cash. She who
pled Eat. pled Pray. said I pray
for your soul.
fasted, said Ask
Him, never once talked of love, or, fondly, My husband,
still

would that I
could lick the dust that like—I
think it’s—mus-
sic will not reach
us here, just wet my fingertip, run along inside
one

sock drawer
so that her sugar, Shiraz
bits she tracked
inside, I could
eat, lick off her plastic tabletop whatever fell
grain

by grain off
her tiny, tin teaspoon. Where
her gold went,
who gives a shit.
I claimed her sugar bowl, white floral veil she prayed in,
to

take once her
daily, daily things. Morning
(one, even)
to step up her
thinly carpeted steps, hear her dentures click and clap.
I

Solmaz Sharif is currently a Jones Lecturer in Poetry at Stanford University. Her first collection of poems, LOOK, will be published by Graywolf Press in 2016. 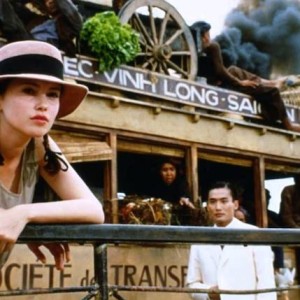 A History of Encounters with The Lover The first time I encountered Marguerite Duras’s The Lover was in a used bookstore in Vermont, over a decade ago. I remember...
© LitHub
Back to top