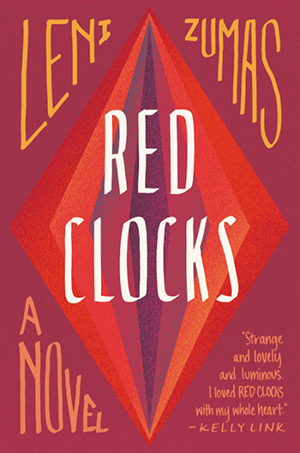 The following is from Leni Zumas's novel, Red Clocks. A set of "pro-family" legislation is passed in the U.S., outlawing abortion, in-vitro fertilization, and single parenthood. Red Clocks follows five women in rural Oregon; single-mother Ro is writing a biography about the 19th-century female polar explorer Eivør. Leni Zumas's previous books are Farewell Navigator and The Listeners, which was a finalist for the Oregon Book Award.

When the polar explorer turned six, she was shown the best way to hold a knife and how to make a slice across the lamb’s throat—just one, they don’t feel it, do it hard, watch your brother.

But when she had the knife and her mother was squatting beside her with the little wriggling thing, she didn’t want to. She was ordered twice to cut it and twice she refused.

Her mother put a hand over hers and drew the knife under the lamb’s face; its face fell off; the explorer fell with it, screaming; and her mother hoisted the animal above a washtub to bleed.

The explorer was beaten on her thighs with a leather strap used for hanging slit lambs in the drying shed. She ate no meat that Christmas or that spring, apart from the occasional secret bite her brother saved in his shoe.

She would do trailblazing research on pack ice. The research would be published under a male acquaintance’s name.

The explorer wrote in her notebook:

Among the different names for sea ice, the name I like best is “pack.” It reminds of dogs and wolves. Things that hunt. To be chased by ice, and torn apart.

She had been lifted off the earth to sit on the ocean with men whose lives were nothing like hers yet whose waking dreams were identical: awkward suits of caribou hide, their fingers numb, the flame-red gash of sunrise. If wrecked in this vessel, they wrecked together.

Near the coast of Greenland they saw the Crimson Cliffs. Enormous shoulders of red-stained snow.

Then the ice was too heavy to proceed. The crew hammered at the pack to save the lead.

Lead gone. Food and gear dragged onto a floe, tents pitched by the sledges. Cook filling mugs with pea soup and boiled bacon.

“She had been lifted off the earth to sit on the ocean with men whose lives were nothing like hers yet whose waking dreams were identical: awkward suits of caribou hide, their fingers numb, the flame-red gash of sunrise.”

Ice a solid floor around the ship. No amount of chopping and sawing and hacking cracked the white grip. The ship was beset.

They cut a hole in the ice by the hull, for quick water if a fire broke out. A narwhal came to breathe at the fire hole, soon joined by others, their helical tusks pricking the air. The sailors watched the hole and would shout “Unicorn!” when a whale appeared.

The explorer had hoped the shattering cold would stop her menstrual blood but down it came, slippery, warm, and she stuffed her crotch with rolled strips of burlap. The burlap was coarse and a poor absorbent; she leaked into her stockings.

The narwhal’s blotchy hide has been likened to the skin of a drowned mariner. Its stomach has five rooms. It can hold its breath under the ice for outrageous lengths. And the male horn, of course—much could be said.

On the seventh morning, they woke to ice floes rafting up around the ship. Huge blue-white shelves, thrust vertical by wind and tide, jumped roaring out of the water and smashed at the keel. To her hoard of knowledge Eivør Mínervudottír could now add the sound ice makes when it destroys a ship. Booming gun-cracks, then a smaller yelping; and from the vibration the ship’s bells began ghoulishly to ring. Within hours, said the captain, the ship would be gone.

Huddled in tents on the ice, their diet was biscuits, lard, and tea twice a day. Every cup wore an unscrapable crust of old butter, cocoa, eggs, and matches.

What is the flavor of human meat? The men in Franklin’s expedition, lost in the Canadian Arctic, turned to cannibalism, according to Inuit reports. I admit to being hungry and to fearing the attack of a seal; and my fingers hurt all the time; but I prefer immurement in these spectral wastes to a seat at any hearth.

The blacksmith harpooned a polar bear. Cook made stew from its liver and heart. The explorer did not take a portion, though it was agony to smell the rich broth. After supper the sailors grew sluggish, slept poorly. By morning, the skin around their mouths was peeling and the skin on their hands, bellies, and thighs sloughing away. They did not believe the explorer when she told them vitamin A occurs at toxic levels in polar-bear livers. They said she had cursed the stew.

Her fingers hurt so much she was always humming. Boatswain said he’d punch her mouth if she didn’t stop.

Doctor reported his medicine chest stolen. It was found the next day, a few yards from the tents, missing morphine and opium pills. An able seaman was blamed for the theft, and shot dead.

The frostbitten skin on Eivør Mínervudottír’s pinky and ring finger, which at first had itched intolerably, went waxy and lifeless. Black-purple blisters seeped rank pus. The doctor offered to amputate the fingers, but without morphine or opium, he said, it would be the worst pain she had ever known.

She packed her rucksack with tools, a biscuit, a flask of tea. Informed a tentful of card-playing crew she would be back in a few hours.

“If not, bitch, we’ll whistle for you,” said the blacksmith.

She hadn’t been walking long when the fog flew in.

There are many names for fog: pogonip, brume, ground clouds, gloom. Mínervudottír had written every name in her notebook. She stood now in a dense, creamy mist, the worst ice fog she’d ever known.

Was her compass damaged? Had she forgotten to bring it?

She shouted “Help” in three languages.

When her legs were too numb and trembling to lift themselves, she sat down.

No reindeer bag to crawl into.
She thought she heard the ship’s bells, but couldn’t place their direction.
She drank ten sips of tea.
It was like sitting in a cloud.
She thought of her brother.
Slit lambs hung in the shed, throats red.
Brother, where are the bells?
She tasted lamb meat. She was chewing her own cheeks.
Brother bells
are the
where

From Red Clocks. Used with permission of Little, Brown and Company. Copyright © 2018 by Leni Zumas.

Jojo Moyes: What is the Thing That Makes Me Happy? 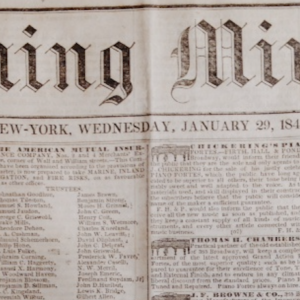 Lit Hub Daily: January 29, 2018 From Octavia Butler to Stephen King, 13 writers whogrew to hate their own books. | Literary Hub Emma Glass: How the...
© LitHub
Back to top