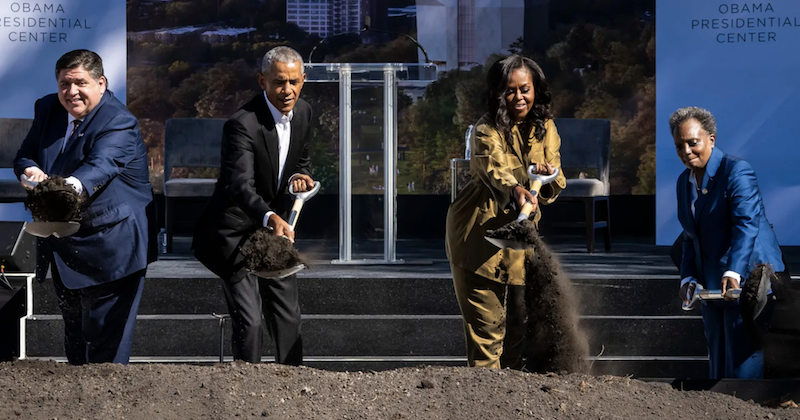 Everything you need to know about the controversy over Obama’s presidential library.

Yesterday saw the groundbreaking of the Obama Presidential Center, former president Barack Obama’s presidential library in Jackson Park on Chicago’s South Side. In their speeches, the former president and Michelle Obama both focused on their personal ties to the South Side; it’s where Obama got his start in organizing and politics, and also where the couple met. According to the Obamas, the groundbreaking of the Presidential Center was an inevitable coming home. Yet since its announcement, the Presidential Center has courted controversy: both from historians and archivists, due to its differences from past presidential libraries, and from environmental preservationists and community organizers, for its Jackson Park location.

The Presidential Center is unlike most other presidential libraries. Firstly, the Presidential Center is run by the Obama Foundation, a private nonprofit. All other presidential libraries and museums going back to Herbert Hoover are run by the National Archives and Records Administration, a federal agency. Some skeptics fear this privatization opens the door for partisan interests to curate what is meant to be a public archive. Timothy Naftali, former director of the Richard Nixon library—who was behind the revamping of the Watergate exhibit to remove pro-Nixon bias—was stunned by the move. “It was astounding to me that a good president would do this,” he told the New York Times.

In another break with tradition, the Presidential Center has no research library and Obama’s presidential archives will not be housed on site. Instead, all unclassified paper records are being digitized by the Obama Foundation and will be made available online. Robbin Cohen, the Obama Foundation’s executive director, told the New York Times the choice was in service of making the records “as accessible and available to the public as possible.” Some scholars fear that the lack of a dedicated presidential library will stifle dedicated archival research into the Obama presidency; others have suggested that this is just how archives will work as we trek further into the digital age.

But the ramifications, positive or negative, of the Obama Foundation’s choice to go digital haven’t made themselves clear yet. More easily understandable are the two controversies stemming from the Foundation’s choice of location for the Presidential Center. The Obama Presidential Center was built on 19.3 acres of wooded public parkland in Jackson Park, a historic urban park on the National Register of Historic Places—despite considering an alternative site near Washington Park. This raised major concerns for local environmentalists, who learned over one thousand mature trees in and around the park would be felled; migratory birds would be harmed by tree removal and the construction of a tower so close to Lake Michigan; and two major roads would have to be closed. These problems would not be present if the Presidential Center was built at the Washington Park site. Preservationists were also concerned about the precedent the project sets in allowing powerful interests to confiscate public parkland. The Obama Foundation refused to comment on why the Jackson Park site was chosen over the Washington Park site.

Landscape historian Dr. W.J.T. Mitchell, a co-plaintiff in the lawsuit, told the Chicago Reader that he attended a town hall meeting in 2017 where residents were invited to ask questions about the Presidential Center—but when attendees started raising objections to the Jackson Park plan, the open portion of the meeting was ended, and they were told to talk in small breakout groups. According to Mitchell, the city stopped allowing open mic questions at meetings regarding the Presidential Center after that.

Last December, a Memorandum of Agreement was signed by the Federal Highway Administration, an Illinois State Historic Preservation Officer, and the Advisory Council on Historic Preservation, meant to diminish the adverse effects of construction. Construction on the Presidential Center was finally able to start when a four-year federal review conducted under the National Environmental Policy Act found in February that the Presidential Center would pose “no significant impact to the human environment,” though it would “diminish [Jackson Park]’s overall integrity by altering historic, internal spatial divisions that were designed as a single entity.”

But the Jackson Park location isn’t just controversial for environmental preservation reasons: locals also expressed concern over the Presidential Center’s possible impact on residents of the nearby, predominantly low-income neighborhoods. An investigative study by the Nathalie P. Voorhees Center found that rents within a two-mile radius of the Presidential Center site have been rising at a faster rate than in the city overall since 2016; as of 2017, 42% of renters make less than $20,000 annually, and 91% pay more than 30% of their monthly income on rent. Eviction rates in those areas are higher than the Chicago average. In Woodlawn, right by the Obama Presidential Center, around half of households make less than $25,000 a year. The draw of the Presidential Center, and ensuing economic development, has the potential to make rents skyrocket and displace residents. More than a dozen local groups united to form the Obama Community Benefits Agreement Coalition, which urged the Obama Foundation to sign a community benefits agreement promising to set aside jobs at the Presidential Center for community residents, protect housing for working families, and strengthen neighborhood schools.

Obama was having none of it. In 2017, at an event for the Obama Presidential Center, when asked directly by Woodlawn resident and community organizer Jeanette Taylor, Obama said he would not sign any community benefits agreement. “I’m not an outsider here. I know the neighborhood. I know the minute you start saying, well we’re thinking about signing something that will determine who is getting jobs and contracts and this, that, and the other, next thing I know I’ve got 20 organizations that are coming out of the woodwork, some of them that I’ve never heard of before.”

At the time, Taylor, who paid $1,000 a month for the apartment she shared with her mother and two children, was angry: “He got a lot of nerve saying that,” Taylor told Politico. “He forgotten who he is. He forgot the community got him where he is.”

Taylor didn’t forget: she became an alderman in 2019, and worked with alderman Leslie Hairston to establish a Woodlawn Housing Preservation Ordinance that was passed unanimously by the Chicago City Council in September 2020. The ordinance, an expanded version of one proposed by the Lightfoot administration, allots $4.5 million of funding for new and expanded housing programs. The ordinance includes home repair grants, affordability requirements on all rental and for-sale developments on city-owned land, and expanded tenant rights. Taylor described the ordinance as a “compromise” and promised to keep working to expand affordable housing protections.

“I’m excited,” Taylor told the Hyde Park Herald after the ordinance was passed. “This was never about us not getting the Obama Presidential Center. This was about folks who are currently living in our community being able to enjoy it.”

The conversation still isn’t over. Yesterday, just blocks away from the Presidential Center’s groundbreaking ceremony, the Community Benefits Agreement Coalition held a press conference where they called on Mayor Lightfoot and the city to follow through on the ordinance: one year after the passing of the ordinance, the city hasn’t designated which city-owned vacant lots will be for affordable housing. They also drew attention to already rising prices and displacement in South Shore and other surrounding neighborhoods, which weren’t accounted for in the housing ordinance. “You can cut the ribbon but don’t cut us out,” said South Shore resident Dixon Romeo. “This is our community and we’re here to stay.”

Over at the groundbreaking ceremony, Obama spoke about the reason for the Presidential Center’s location: the Center is “surrounded by vibrant neighborhoods and a community where we can help make a difference.” Then, at length, he spoke about the site’s personal importance to himself and his family. “[Michelle and I] were married here; had our reception right down at South Shore Cultural Center; our daughters were born right down the street at the hospital,” he said to attendees. “We bought our first home here a few blocks away.”