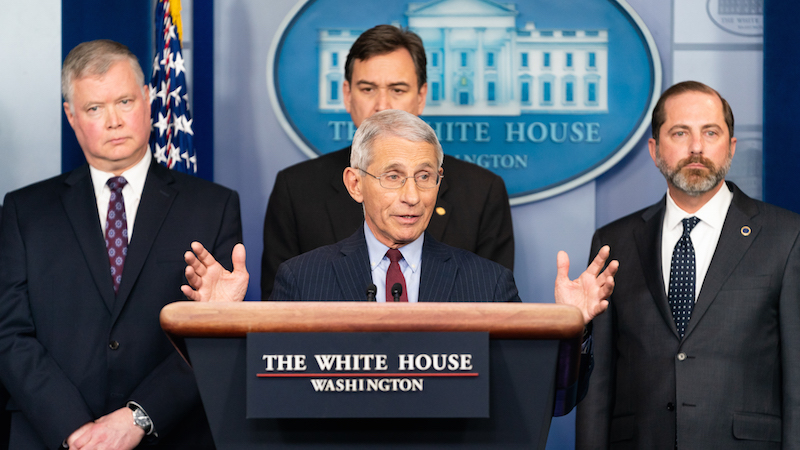 Everything you need to know about last week’s Anthony Fauci book deal controversy.

If you’ve been reading frightening headlines or tweets saying that Dr. Anthony Fauci is set to make millions off of a book about lessons he learned from the COVID-19 pandemic, let me set your mind at ease: he isn’t. Instead, what you’re seeing is viral misinformation spread by conservative politicians and news outlets after a simple web publishing mistake.

Here’s how it all went down: in May, Publishers Lunch’s fall books preview included a book by Dr. Anthony Fauci, set to be published by National Geographic Books in November, titled Expect the Unexpected: Anthony Fauci on Truth, Service, and the Way Forward. Read the blurb, “The earnest reflections in these pages will offer a universal message on how to lead in times of crisis and find resilience in the face of disappointments and obstacles.”

On May 31st, the conservative news outlet The Daily Caller published an article noting the upcoming release of Expect the Unexpected. Assumptions about Fauci profiting off the book proliferated: Charlie Kirk, founder of conservative nonprofit Turning Point USA, claimed on Twitter on June 1st that Fauci “[would] make millions off of a new book about ‘Truth’ while Americans continue to suffer because of his endless stream of lies.” The outrage was linked to the June 1st release of Fauci’s emails from the early weeks of the COVID-19 pandemic by the Washington Post and Buzzfeed News, sparking the spread of misinformation about Fauci’s early handling of COVID.

Then, Expect the Unexpected disappeared from the websites of Amazon and Barnes & Noble. On June 2nd, Just The News, another conservative news site, published an article saying that the book had been “scrubbed” from Amazon and Barnes & Noble “amid criticism that he is profiting from the deadly COVID-19 pandemic,” implying the book had been canceled—or deemed unfit to sell by retailers—for this reason.

But this claim was unfounded. According to a National Geographic spokesperson, the book was removed from the websites simply because it was prematurely posted for pre-sale. Corroborating this claim, Barnes & Noble spokesperson told The New York Times that Expect the Unexpected was not removed proactively from their site by Barnes & Noble, and Barnes & Noble “expect[s] it will be available again shortly for purchase as soon as the publisher decides to list it.”

Yet these facts haven’t stopped conservative media from continuing to say that the book was “scrubbed” from Amazon and Barnes & Noble without mentioning that National Geographic has said otherwise, and that Fauci is not set to profit from the book’s publication. Sean Hannity pushed the narrative on Twitter; so did Trump’s former doctor, Texas Rep. Ronny Jackson; so did Tennessee senator Marsha Blackburn, who also released a book during the pandemic.

It appears that, despite what these pundits would have you believe, Fauci isn’t financially profiting from Expect the Unexpected; this is no American Crisis situation. The most morally suspect thing going on here is the lionization of a flawed political figure amidst mass tragedy. And that happens all the time.