It was love at the very first line. I got off the bus in a strange neighborhood, a winter afternoon and already dark. It was after school and I was visiting my friend, Carolyn, to beg for help with math, at which I was hopeless. While taking off my coat in her bedroom, I spotted a thin paperback in the light on the nightstand, The Collected Sonnets of Edna St. Vincent Millay. I picked it up and read,

I too beneath your moon, almighty Sex
Go forth at nightfall crying like a cat . . .

Forget algebra. This was shocking. This was a woman talking about sex with a capital “S,” no bones about it. Not only that, in another poem it was clear that she didn’t give a damn about the boy-girl conventions we’d grown up with: basically that girls were not allowed to initiate a date, or much of anything:

I shall forget you presently, my dear
So make the most of this, your little day,
Your little month, your little half a year,
Ere I forget, or die, or move away,
And we are done forever

What a possibility. You mean we had a choice? We didn’t have to wait by the phone, or freak out in the high school corridors, obsessing over signs and signals from the male sex as to our worthiness? We could just toss all of that to the winds?

Whether or not we find what we are seeking
Is idle, biologically speaking.

Sex for the sake of sex? There is such a thing as female satisfaction?

It was contrary to everything we believed. We knew nothing about our anatomy and heard only horror stories about the other. Understand this was 1965, when girls were not permitted to wear pants to public school, and we’d be sent home if our skirts were half an inch above the knee. We’d practically sworn to remain virgins until we were married, and anyone who wasn’t was a tramp.

But this was poetry. This was authoritative, like Emily Dickinson and Shakespeare, who we were studying. In the Bronx High School of Science, a school of National Merit Scholars and future M.D.s, I was one of the few “creative” types. They dug quantum theory, but poetry was my language. I heard what Millay was saying, in a rebellious, free-spirited voice. Two years later in freshman year at college, everything would go to hell, but for now I was living with my parents, walled up like a prisoner inside their “middle-class values.” All I could do to express my frustration was to go around dramatically reciting revolutionary verse. Not many understood except our beloved English teacher, Ted Rifkin, who showed me a textbook with the famous Arnold Genthe photograph of Millay among the magnolia blossoms at Vassar. Mr. Rifkin kindly said I even looked like her. That was it. The thrill of my life. She was my idol and the bond was sealed.

Millay was not simply a voice for female sexuality and freedom. I found her life to be a blueprint for how to fully engage in the literary world I aspired to, and what it would demand: courage, confidence, mastery, anarchy, and appetite. She embodied all of it.

As a child, Edna St. Vincent Millay (named for the hospital where her uncle’s life was saved) insisted on being called Vincent. She and her two sisters were raised by an independent woman they adored (“Dearest Mumbles” in her letters) who divorced their father and supported them by being a nurse. Millay was gifted; she won her first medal for poetry age 14, the Pulitzer Prize at 31, and the Frost Medal for lifetime contribution to American poetry 20 years later.

At Vassar, which was then women-only, she had affairs with classmates, and in later years was openly bisexual. She moved to New York City where she helped found the Cherry Lane Theater. Famous for her red hair, green eyes and unabashed sensuality, she was known as “the gamine of Greenwich Village.” Despite proposals from luminaries such as Floyd Dell and Edmund Wilson, Millay chose to marry a Dutch coffee importer, Eugen Jan Boissevain, 12 years her senior. They were married for 26 years, and although both carried on flamboyant affairs, they remained devoted to each other. They lived the most romantic lifestyle—on a farm in upstate New York where they raised their own vegetables, and an island off the coast of Maine, where they swam naked in the icy water.

Millay was a celebrity poet. She was a riveting performer, which is not surprising, given her years with experimental theater in the Village, and an interest in drama that would lead her to write radio plays and opera lyrics. At the age of 20, it had been her dramatic reading of her poem, “Renascence” at the Whitehall Inn in Camden, Maine, that caught the attention of Caroline B. Dowd, a wealthy patron of the arts, who paid for her education at Vassar. In her prime, Millay traveled widely and drew big crowds, the superstar mystique enhanced by Eugen’s handling of her as if she were a precious doll, covering her shoulders with a sable cape and murmuring, “We’ve got to get you out of here,” as he protected her from fans.

Michael Ryan, Director of the MFA Program in Poetry at UC Irvine, describes the unique appeal of those performances:

The character Edna St. Vincent Millay invented to speak her poems was very much of her time and acquired for her a fame it’s hard to imagine a poet having today. She was adored by many readers who felt she was speaking what they really felt from a life that they both wanted and did not want to have but were happy to live through her.

In this she was precursor to the requirement of writers today that we be outsized public personalities, managing websites, newsletters, Twitter, and festivals, teaching aspirants by perfect example, while dedicating ourselves to our craft—a proposition that requires a split personality—one side nimble and responsive to trends, the other steeped in isolated work. For most of her life, Millay had the ability to integrate both, but at the height of her popularity she suffered the fickleness of critical opinion. Biographers say the “propaganda” poetry she wrote during WWII, denouncing the Nazi destruction of the Czechoslovak city Lidice, for example, hurt her reputation as a serious poet:

The whole world holds in its arms today
The murdered village of Lidice,
Like the murdered body of a little child.

I imagine the harshness of the critics contributed to her decline in the later years. Plagued by accidents and ill health, she grew isolated and afraid. She and Eugen drank too much. He died of lung cancer in 1949. Millay died the following year, in truly theatrical fashion. She had been been up all night correcting proofs, written a note for the housekeeper, and at dawn apparently started up the stairs. Eight hours later her body was discovered by a handyman, the wine glass and bottle still intact where she had placed them on the step above. She died of a heart attack at age 58.

I am grateful to have had Edna St. Vincent Millay as a model of inspiration, and happy to report that her influence is alive and well. When I tracked down my friend, Carolyn, for this essay, 50 years after we graduated high school, she not only remembered our shared delight in The Collected Sonnets of Edna St. Vincent Millay—she still owns the original book.

April Smith is the author of six previous novels, including her first best seller, North of Montana. She is also an Emmy-nominated television writer and producer. She lives in Santa Monica, CA, with her husband. 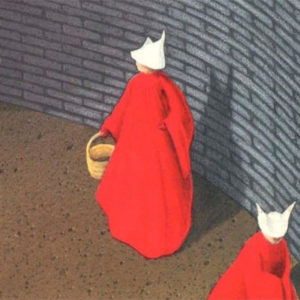 “There has never been a more important time for writers to assemble,” Azar Nafisi, author of Reading Lolita in Teheran,...
© LitHub
Back to top