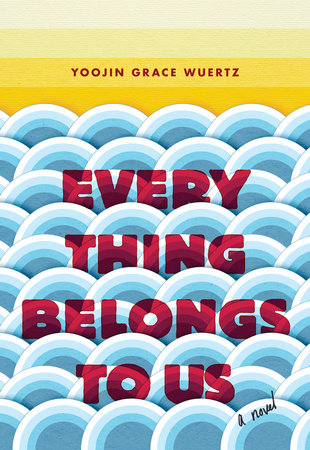 The following is from Yoojin Grace Wuertz’s novel, Everything Belongs to Us. Wuertz was born in Seoul, South Korea, and immigrated to the United States at age six. She holds a BA in English from Yale University and an MFA in fiction from New York University. She lives in northern New Jersey with her husband and son.

Namin could not remember the first time she and Jisun noticed each other. All the girls were new to one another at the time, nervous to be starting at Kyungki Girls Middle School and anxious to prove they belonged there. They had all passed difficult exams in order to be admitted, but most of the girls were daughters of government officials and top businessmen. Girls who were used to enjoying elite privileges, unlike Namin, whose parents had barely been able to afford the black-and-white sailor uniform and matching coat that Kyungki required.

Far from scrambling to make friends like the other girls, Namin had kept to herself, unwilling to expose her poverty by getting close to anyone. She knew she could outperform the other girls academically, but no amount of hard work would make the things she needed to fit in materialize. Everyone else had new leather satchels and a wardrobe of expensive-looking shoes, compared with her dingy canvas bag and the scuffed black loafers she wore every day. Many of the girls were dropped off by their family’s chauffeurs each morning, while she had to take a bus that snaked through north and central Seoul, across the Han River, before it finally let her out in Gangnam; it was a ride that took more than fifty minutes and sometimes felt like a battle even before the day had begun. In bad weather, Namin wore triple layers of socks and stockings and arrived at school drenched while other girls barely had a drop on their heads from being ferried under umbrellas to the building’s threshold. During the warmer months, her desk mate made nasty comments about washing once in a while. Namin bit her tongue because she washed every day, twice a day; but not everyone on her bus did, and they were packed in like sardines by the bus attendants whose job it was to forcefully shove as many bodies as they could into the bus at every stop.

There were things the other girls at Kyungki seemed to know intuitively about one another’s families—what it meant to live in a certain neighborhood or own a particular make of car—that Namin could not grasp. But even she knew about Jisun, whose father was one of the most powerful chaebol leaders in the country. For that reason alone, Namin kept a wide berth, wanting nothing to do with her. But Jisun had pursued her friendship, drawn to her for reasons that were entirely unclear.

Namin remembered one day, a few weeks into the new school year. It was after lunch and she found herself standing alone with Jisun. A short distance away, the other girls were crowded around a classmate who was showing off a box of Swiss chocolates, a gift from her diplomat father. Namin had pretended not to care but mentally recorded every detail of the tiny chocolates, dark little bites drizzled with a slightly lighter shade of chocolate. They were shaped like hearts, each nestled in its own perfect compartment. The other girls, chattering and cooing in appreciation, reminded her of a well-groomed flock of birds. “Don’t be fooled by all that,” Jisun said in a low voice. “You aren’t, are you?”

“Of course not. What’s there to be fooled by?” Namin said, pretending she understood what Jisun was talking about. In reality, she had no idea.

“That girl’s making a big deal out of those candies when they’re just cheap little things. You know, they sell them at the airport next to the aspirin and the chewing gum. No real Swiss person would think to make such a fuss. It would be like us singing hymns to a common steam bun. Actually I love steam buns, so forget that. It would be like us going crazy over any old plate of kimchi.”

“Well, maybe in Switzerland they would go crazy over kimchi,” Namin said doubtfully. The chocolates looked pretty special to her.

She wouldn’t mind trying one, even if it turned out to be as commonplace as kimchi—or airport chewing gum. Considering she’d never been on an airplane or even seen the airport in her own country, airport chewing gum sounded like a fantastic concept, like buying Juicy Fruit on the moon.

“The point is, she’s showing off like it’s a big deal,” Jisun said. “She just wants everyone to envy her. That’s why I can’t stand those girls, all they want is for people to follow them.” She looked at Namin. “And that’s why I like you. You don’t care what anyone thinks, do you?”

Namin thought about how ashamed she felt of her shoes and how she often wished some mysterious rich relative would show up with expensive gifts so she could be like the other girls at school. Despite what Jisun said, she envied those girls and wondered what it would be like to own something they would admire for once. But she would never admit such feelings to Jisun.

“But aren’t you just as bad,” Namin said, “bragging about how you know all about those chocolates? I suppose you have even better ones at home.”

Jisun glared at her. “The only reason I know about those stupid chocolates at all is because my father shoved us away to Switzerland so he could kick my mother out of the house while we were gone. She died last year, you know. Probably just to spite him. I would try the same if I thought he was worth the trouble.”

The revelation shocked Namin. Immediately she felt the need to lock down her own secrets, as if somehow Jisun could read her mind and discover what she was hiding.

“I don’t believe you,” Namin said.

They were eleven years old. Together, Jisun and Namin practiced the art of being unfazed. Each pretended not to be shocked by the other’s household, by the huge gap in their social and financial realities, which was so obvious that they could neither deny nor discuss them beyond the most superficial levels. Already, they knew much more about life than most girls their age, but they pretended to know even more than they did—about money, about families and death, friendship and betrayal. About love and lies.

Or perhaps only Namin was pretending and Jisun truly was as detached as she appeared.

The following year, when Jisun started receiving love notes from an older boy named Juno, a friend of her brother’s, Namin was stupefied. But Jisun barely glanced at the carefully folded stationery before tossing the sheets in the trash.

“Don’t you even want to know what it says?” Namin asked, fighting the impulse to fish them out. Jisun’s garbage was so clean that it wouldn’t have been a big deal, but her pride kept her in check. “At least see who it’s from.”

Receiving a love note seemed as marvelous and exotic as finding an uncut diamond in the gutter. Namin was appalled by Jisun’s carelessness. Boys and girls rarely mingled in middle or high school. They attended separate single-sex schools and socialized strictly within their gender. The only time they could even catch a glimpse of any boys was on the street or on Sunday afternoons. Under such circumstances, when would anyone even have the opportunity to develop any kind of serious crush or love interest? Of course, people still made eyes at each other, but it rarely went beyond that first nameless stage.

If anyone ever wrote her a love letter, she would certainly read it. Even if she decided she didn’t like the boy, she would save his letters as a memento, as evidence of having been admired.

“I know who it’s from,” Jisun said grimly. “This kid Juno. Family friend. He ’s been sucking up to us since we were babies. He already follows my brother around like an orphan duck, and now I guess he’s using me as insurance.”

“How are you insurance?”

“He probably has this stupid idea that if we get married one day, then he can get a part of my father’s company.” Jisun looked askance at her. “My father says people don’t get rich by accident. He says it takes ‘long-termplanning.’”

It was a stunning piece of information, and Namin packed it away to think about later. In the following years, she would return to this bit of inadvertent counsel again and again—it would become a kind of touchstone—but for now she had other questions and more pressing concerns. At their age, the idea of marriage seemed as impossible as it did inevitable, but she had never heard any girl discuss it so matter-of-factly. As if her future were already engraved in granite.

“Isn’t it possible that he actually just likes you?” Namin asked.

“Isn’t it more possible that I’m just right?” Jisun said. “Whose side are you on, anyway?”

“Yours, I guess,” said Namin. But sometimes it seemed Jisun went out of her way to make it hard to be on her side.

Jisun was as unimpressed with love letters as she was with Swiss chocolates, the grandeur of her family’s home, her wardrobe, which appeared magically stocked with new clothes each season, her driver, her housekeeper—her effortless life in general. She had everything, yet she refused to understand why someone else—someone like Namin, for example—might want a taste of that fantasy for herself.

“Trust me, you wouldn’t want this either,” Jisun said now, about the letters. She heaved a sigh, as if being admired were the heaviest burden in the world.

She always seemed to know what Namin was thinking yet still arrived at the wrong conclusion.

Later, when Jisun left her alone to use the bathroom, Namin poured out a bottle of Jisun’s red nail polish into the wastepaper basket, dripping the bright scarlet color over the pages. It was a childish, spiteful impulse, satisfying her need to waste something precious that they both enjoyed. The nail polish was not allowed at school, and they’d be scolded by any adult who saw them wearing it on the street. But they spent painstaking hours coloring their nails anyway, changing their minds, rubbing or peeling it off, choosing another color, and starting all over again. All the while knowing they could wear it only in Jisun’s bedroom and would have to remove all trace of it before they went out. Jisun owned three colors: red, pale pink, and clear. The cap of the nail polish was made of smooth black plastic and stamped with a logo of white interlocking Cs facing opposite directions. Jisun had once explained that the Cs stood for Chanel. From France.

Drizzling the polish in wide, lazy swoops over the ruined love notes, Namin inhaled the sharp fumes of the chemicals until her eyes started to water. She was careful not to get any drops on the white carpeting, which would have been a far more serious transgression—way beyond what she wanted to achieve. She wanted only to know what it was like to destroy something simply because she wanted to. The way Jisun did all the time, without considering the cost or consequences.

From EVERYTHING BELONGS TO US.  Used with permission of Random House. Copyright © 2017 by Yoojin Grace Wuertz. 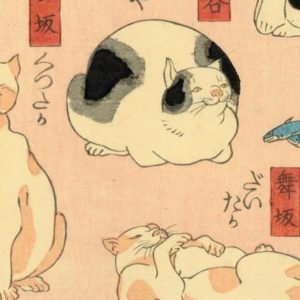 Kyoko Mori on Writing Through Deep Trauma Within two minutes of our first meeting, on a morning in September 2015, Kyoko Mori, the acclaimed author of fiction and nonfiction,...
© LitHub
Back to top