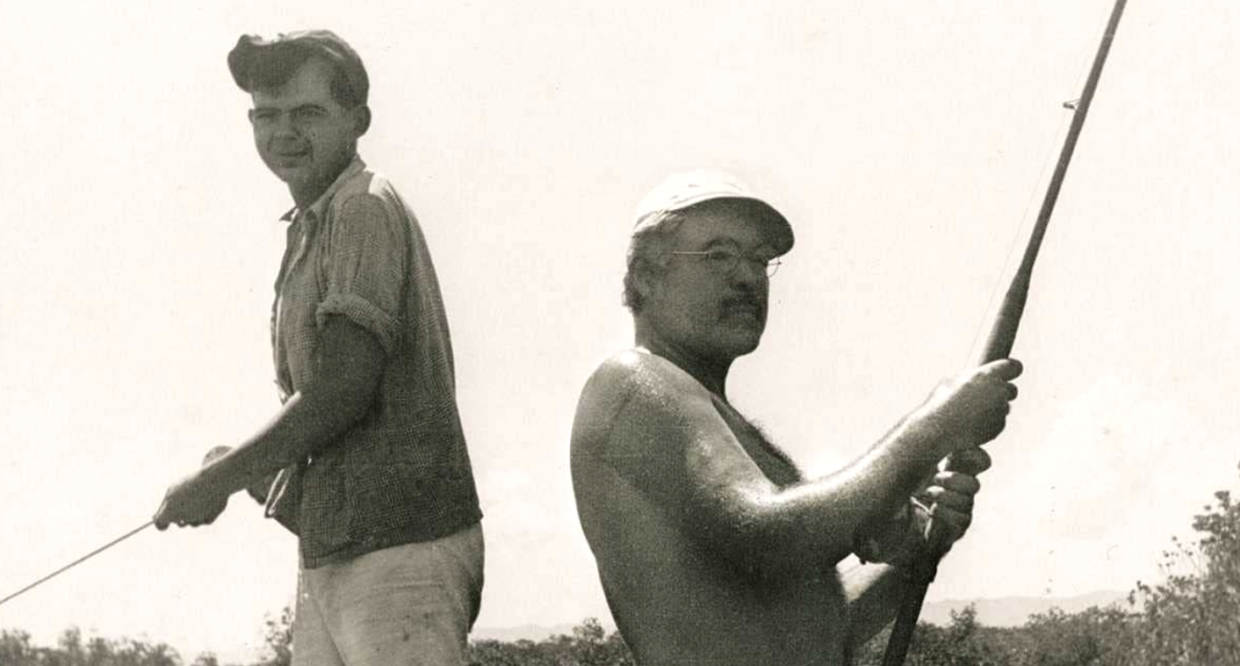 “Every night we hear the coyotes howl.” Read Letters from Ernest Hemingway to His Son

By Ernest Hemingway and Patrick Hemingway

When Patrick Hemingway was born in June 1928, Ernest Hemingway was 28 years old. He had already published The Sun Also Rises (1926), and A Farewell to Arms was about to be released. Ernest wrote his first letter to Patrick when he was just four years old. Ernest was on his first African safari, which would ignite a lifelong passion for that continent. Patrick was coping with having a younger brother, Gregory, born in November 1931.

While there are relatively few letters from this period, they represent the foundation of a relationship which was deep and significant to both father and son. In an article in Playboy, published in December of 1968, Patrick would refer to his childhood as “truly magical,” and from these letters we can see why.

When Patrick wrote the last letter here, he was just shy of fourteen years old, romping around Key West, enjoying the last of his pre-boarding school freedom. Ernest was hunting U-boats in Cuba.

How are you and how is Hooley and Gregory?

Papa took mama down to go to church and we went shooting too. We shot 24 Sage hens. They are bigger than chickens and fly very fast and make a big roar when they fly. We have eaten nearly all of them and eat the rest tomorrow. My they are good!

Coming home we saw 4 bears and 4 big bull moose. I took their pictures and when they are done will send them to you.

Every night we hear the coyotes howl.

Papa has been sick in bed but he is all right now.

When my book comes out next month I will send it to you for you alone. It has fine pictures.

Tell Aunt Jinny I am trying to buy a good pointer to hunt with Hooley.

from Papa
Love to Everybody at Piggott in your house

How are you old Booze fighter?

Give my best to Mr. Josie and Capt. Bra and Sully. Tell Griggy his mother is a great hunter.

You should have seen the natives carry her on their shoulders chanting and dancing and singing the lion song the night we killed our first big lion. They carried her around the fire and all the way to her tent.

We have seen 83 lions We killed 3 black maned lions. Big ones. Charles killed the biggest. And one other lion. Then we killed 35 hyenas. 3 Buffalo bulls. About 8 Thompson gazelles, about Six Grant Gazelles, 3 Topi, 4 Eland, 6 Impalla, 2 Leopards, 5 Cheetah, a lot of Zebra for their hides. 3 Water buck, one cerval cat, 1 bush buck, 1 Roan Antelope, 3 wart hogs, 2 Klipspringers, 2 oribi, and

You would love this country.

Maybe we will come out here and live all of us. Mother likes it the best of any place she’s ever been.

in a little plane ordered by the government fellers in Lake Victoria Nyanza to see a Dr. He has fixed me up, with injections, and I fly back day after tomorrow.

When I was sick [MISSING TEXT, MARGIN CUT OFF] a pint of blood at grand commission every day.

I thought my insides were coming out and that we would have to put in some of Jimmy’s old hose.

Give my love to your Aunt Ura and tell her I’ll write her. Also love to Beezer, to Griggy and best regards to Ada. (.)

Also remember me to Jimmy. (.)

*
A PICNIC AND ILL WILL TOWARD A ROOSTER

How are you. I got your letter day before yesterday. Please bring the air rifle out west. Yesterday we went on a picnic to the Kahns we had hambergers and after that we went to the brook and had a swim. Today is field day we are going to have all kinds of sports we are all fine.

p.s. hope the rooster is dead.

Well we got back to Key West all right but it certainly is lonesome with no family. Had to cross in a bad blow and my legs still ache from steering all night. Too rough to sit on the seat and the sea abeam (sideways), so it was all roll.

Mother writes she is having a wonderful time. She has been in Germany and Austria too and all over France in a car.

Have to stop now for packing. Everybody from here sends love to you. Either Bruce or I will pick you up. Probably Bruce as I do not want to face New York with all business to do as well as the Stork Club to look after when should get out to the ranch.

Be very good with Bruce on the train and not be nuisances because being all by ourselves everybody has to be as good as possible or we will be liable to have the glorious discipline of indiscipline and you remember where that got the Spanish Republic to. (That well known Creek.)

Much love from Papa and see you soonest. Have the Air rifle and so on. The Bumby caught a big rainbow trout, he writes, in the North Fork of Shoshoni.

Thanks for the good letter. You write better all the time.

The weather is fine here today and if Uncle Leicester doesn’t come today I am going to be afraid that he and Sir Anthony have ticker trouble. There have been three good days now to cross. But no sign of them.

Glad they’ve got some good fights. Has Geech fought? Or the

Iron Baby? Or Lord Joseph the Fighting Bob of Battles?

Here we’ve won the last eight times straight at Pelota and I am way ahead on the season. Over 100 dollars ahead. Ermua has been playing wonderfully and so has Guillermo. Guillermo comes out to the house now to play tennis too. He can play with either his right or his left hand and can serve faster than Sir Anthony even.

Papa is down to 198 lbs and in very good shape. Yesterday I borrowed Frankie Steinhardt’s pointer Vicky and hunted way into the back country. It is beautiful there. Plenty of doves and

Galdings along the stream we found one covey of quail. Also three jack snipe. Also pointed an unknown something and when I walked in to kick it out what should it be but a setting hen. I know all the people on the land back of us almost to our Old church so you can hunt wherever you want to.

Shot three guineas last week. Am not shooting too many because want there to be plenty when you come. Am getting some pigeons too and letting them go wild. The guineas are wonderful to shoot flying. As good as pheasants. I got one with the right barrel and one with the left barrel as the whole flock came over me at the height of the big tree tops. When they hit the ground they really make a bump too.

Everybody asks about you and when you are coming back. Haven’t let anybody shoot a plover on the place and there are plenty of them now. The jack snipe are funny. Sometimes there will be as many as a dozen on the bog. Then you won’t find one. Yesterday one I got was only stunned by one pellet. You could have had him for a pet. But instead he became a thing for the stomach.

That dog pointed them beautifully. The other day when had no dog there was a whole covey of quail dusting in the road. They wouldn’t fly and ran into the brush before they went up. There were about thirty in the covey and I didn’t get one because from the brush they flew across the river.

Dr. Kohly sends his best. He is anxious to see you and see how the treatment is coming. Are you keeping up your Tennis?

School lets out the end of next week, we are coming over the following week, depending when we can get reservations.

Mother got back Thursday from her trip to Piggott. She lost five pounds and looks very well. Gregory is just recovering from a cold, the first one since we saw you.

Gregory and I and a couple of other boys, rode up to Pirates Cove on our bycycles, we fished up there on the old railroad bridge. I caught nothing, but Cort (one of the boys that went with us), caught a big snapper and a grouper.

Most of the birds have gone north now, but we still have a few. So far I have an average of 94% in exams, I hope I keep it up. Ada and I are okay.

The bantam hen brought out two chicks, out of twelve eggs, not so hot. They are very cute, one is much darker than the other. Both roosters go around arguing which one is the father.

I have been doing a lot of fishing, mostly for snappers and jacks. I use live shrimps for the snappers, plugs for jacks. Grand total so far; one barracuda, lots of bait.

The woodworms are swarming now, you can hardly stay near a light.

Gas rationing has gone into effect. Mother can get only 3 gallons a week.

How is Bumby. Give love to Marty. 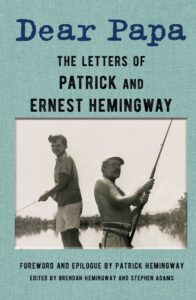 Excerpted from Dear Papa: The Letters of Patrick and Ernest Hemingway. Used with permission of the publisher, Scribner. Copyright 2022.

Ernest Hemingway did more to change the style of English prose than any other writer of his time. Publication of The Sun Also Rises and A Farewell to Arms immediately established Hemingway as one of the greatest literary lights of the twentieth century. His classic novel The Old Man and the Sea won the Pulitzer Prize in 1953. Hemingway was awarded the Nobel Prize for Literature in 1954. Known for his larger-than-life personality and his passions for bullfighting, fishing, and big-game hunting, he died in Ketchum, Idaho on July 2, 1961.

Patrick Hemingway is the middle child of Ernest’s three sons. Born in Kansas City, Missouri, in 1928, he grew up in Key West, Florida. He graduated from Harvard University and pursued a career as a professional hunter in Tanzania, Africa, and later became an instructor at The College of African Wildlife Management Mweka. There he served as a Forest Officer Wildlife seconded from the Food and Agricultural Organization of the UN (FAO). He retired to Bozeman, Montana, where he lives with his wife and family.

It’s Never Too Late For Your First Tattoo 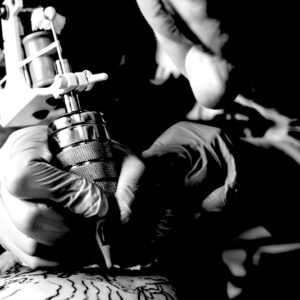 It’s Never Too Late For Your First Tattoo

I had something of a mental breakdown in the hours before getting my first tattoo. According to everything I learned growing...
© LitHub
Back to top
Loading Comments...