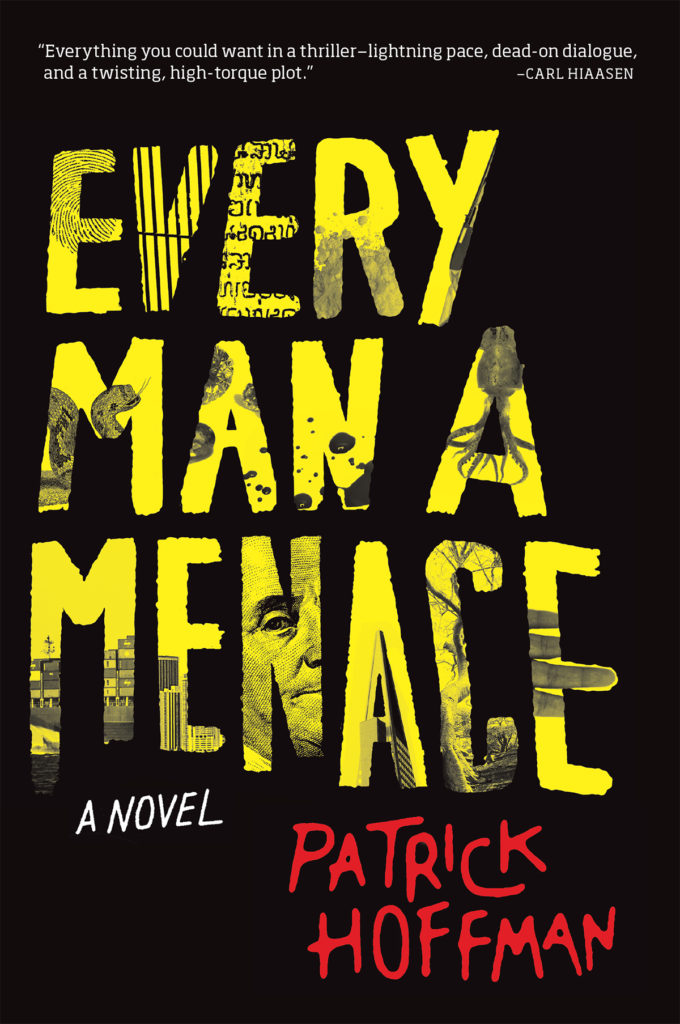 The following is from Patrick Hoffman’s novel, Every Man A Menace. Hoffman is a writer and private investigator based in Brooklyn. His first novel, The White Van, was a finalist for the Crime Writers' Association Ian Fleming Steel Dagger Award and was named a Wall Street Journal Best Book of the Year. He was born in San Francisco and lived there for half his life, working as an investigator, both privately and at the San Francisco Public Defender's Office.

Getting out of prison is like having a rotten tooth pulled from your mouth: it feels good to have it gone, but it’s hard not to keep touching at that hole. Raymond Gaspar served four years this time. He served them at a place in Tracy called the Deuel Vocational Institution, DVI. The only vocation he learned was making sure the drugs kept moving. By the time he was done, he’d become something like a football coach. He told the players where to stand, what to do. He wasn’t the head coach. That would be his boss, a man named Arthur.

Raymond fell in with Arthur because one of his uncles used to associate with him. As soon as Raymond got bounced from San Quentin up to DVI, his uncle told him to find a man named Arthur. Don’t worry, he said. There’ll only be one Arthur on the yard. That ended up being true. Arthur smiled big when he heard who Raymond was.

It turned out Arthur was a good man to know at DVI. He was big business, and not just there either; he kept a low profile, but his fingers stretched well beyond the yard. He associated as white, but he dealt with blacks and Latins, too; as far as Raymond knew, Arthur was the only man in the California Department of Corrections who could make a call to the Black Guerrila Family or the Aryan Brotherhood and get action from either group. That’s how he was.

Raymond had been locked up for trying to sell a stolen boat to a man in San Francisco. He had walked right into a police investigation that didn’t have anything to do with him. It was simple bad luck. They wrapped him up outside the garage on Sixth Street. When the cops searched his car they found an ounce of crystal meth. It was a bad day. They had him on tape talking about the boat, which led them to the boat itself, back in a garage in Richmond, and they had the drugs. Two months later, his public defender, a good lawyer, lost a motion to suppress at the preliminary hearing, and Raymond was forced to take a deal: four years.

Arthur must’ve thought that stolen boat made Raymond something of a businessman. He kept him off the front lines, didn’t use him as muscle, and right off the bat made him a supervisor. It was a fine thing to be doing: make the rounds, see where things were with the supply, let Arthur know that everything was good. He didn’t have to touch the dope, and he didn’t have to play rough either.

Raymond swore he saw a shine in Arthur’s eyes when he reminded him that his release date was approaching. It was uncharacteristic. “I got a little situation you could help me with,” the older man said. They were sitting near the handball courts in the south yard. A few of Arthur’s men sat near them. Arthur was a big man, with a big head and big shoulders; he sat hunched over with his elbows on his knees. In his country accent—he’d been raised on a horse farm in western Colorado—he explained that he had a little side thing going in San Francisco.

“I got this lady that buys a little pack of Molly every month and sells it to this other dude. Thirty, forty, fifty pounds a month. Real weight. I set it up—everything’s good. She cuts me a little percentage off the deal each time.” He made a gesture like he was flicking water off his hands. Raymond wanted to ask what kind of percentage, but he didn’t. Arthur told him anyway.

“Thing is, that ten percent is not enough.” He looked at Raymond like he was confirming his level of interest. Raymond nodded.

“What I’d like to do is replace at least one of these two parties with you. I mean, unless you’re planning on going straight or some bullshit? Accepting the Lord into your heart?” Raymond shook his head.

“It’s a complicated situation, though,” Arthur went on. “We can’t just go and push a motherfucker out on this one.” He made his face look like the very idea was distasteful. “Nah, you can’t just push ’em out. I want you to go there and—acquaint yourself with the situation. It’s hard for me to see everything from here.” He pointed at the walls, turned, and looked at Raymond.

“Go and look?” Raymond asked. He felt a sense of uneasi-ness come over him.

“That’s it,” Arthur said. “Just go and look around, get to know these two skunks, see wassup. Do some of that fancy bullshitting you do; make sure this next deal goes through. I’ll cut you half of my ten, put you at thirty thousand or something around there, let you land on your feet. After that, if we gotta do the same shit the next month, we’ll drop it to a quarter of the ten, two-point-five, put you at fifteen or something. It’s not bad.” He smiled; Raymond did, too. Fifteen thousand a month was good.

Arthur continued: “Even if we don’t make a move, it won’t hurt to have you on the ground. You did your thing in here, man. And I still owe that fucking uncle of yours, so…”

He held his fist out. Raymond bumped it.

It felt good to step off that Greyhound bus and put his feet down on Mission Street. It was late in the afternoon, cold and damp around the bus station, but the air smelled clean to Raymond. He walked all the way to the Prita Hotel, on Nineteenth and Mission. He always stayed there when he was in the city. The Prita was the kind of place where you needed to get buzzed in at the front door, then buzzed in again at a second door at the top of some filthy stairs. You talked to the clerk through a dirty Plexiglas window. The hallways smelled like cigarettes and crack smoke. They charged by the day, the week, or the month. The rooms consisted of a bed, a small TV, and a locked door. Raymond paid for a week.

When he’d gotten his room, Raymond lay down and thought about the situation he was about to get into. Arthur had outlined the arrangement. Gloria Ocampo, a Filipina woman, was bringing the ecstasy in. Every month she got a shipment from some Israelis and sold it to a guy named Shadrack Pullman. Arthur had set the whole deal up, hence the 10 percent cut. “But you gotta watch this chick,” he’d said. “She’s paranoid, nasty, and smart.” He tapped the side of his head with his pointer finger. “A capital-G Gangster, you understand? Don’t let her looks fool you.”

Raymond had asked about Shadrack next.

“Served his time right here,” Arthur said, pointing out at the yard. “He’s all right—you know—a little on the eccentric side. He’s got a little Pomo in him, you know? Indian, Native American. He’s the type of character gonna let you know what he thinks, one way or the other. He don’t keep it close to the chest, but he’s all right.” Arthur waved his hand like Shadrack was nothing to worry about.

“Truth of the matter is, if we do end up having to move someone, it’s gotta be Shadrack first, ’cause trying to get rid of Gloria would be like kicking a damn hornets’ nest.” He shook his head like he wasn’t ready for the idea. “You never know, though. Her time might come, too.”

Raymond asked what he was supposed to say he was doing there.

“I talk to Gloria somewhat regularly,” Arthur said. “I check in, thank her for her timely payments. Last time she made mention of Shadrack turning eccentric—that’s her word, she called him eccentric—I said, ‘All right, I’ll send someone, have a little talk with the boy, straighten him out.’ She said, ‘No, don’t worry.’ She got a Pinoy accent. I said, ‘No, it’s fine.’Bot-tom line, you know, it’s grounds for entry. But you just gotta say your lines, man. Say you’re there watching over my inter-ests, making sure the deal keeps clicking. She’ll probably ask you, you can tell her you getting two-point-five on my ten.”

Raymond asked if his showing up was going to cause any kind of concern.

“Maybe so, maybe not,” Arthur said. “But what the fuck they gonna do about it? You’re working for me. Those two aren’t about to make a move on me.”

Lying there on the bed, Raymond pictured the whole thing. He could handle it. He could make a threat, or follow through on one. But, the way he saw it, the ideal thing would be to let these two carry on. Collect his two-point-five and stay mellow. He didn’t want to kick a hornets’ nest if he didn’t have to.

From EVERY MAN A MENACE. Used with permission of Atlantic Monthly Press. Copyright © 2016 by Patrick Hoffman.

5 of the World's Great Bookstores, Illustrated

Bookselling in the 21st Century: On the Difficulty of Recommending Books 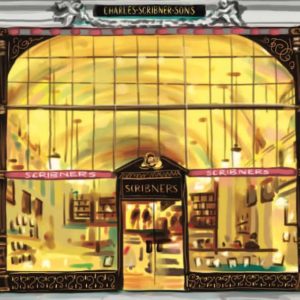