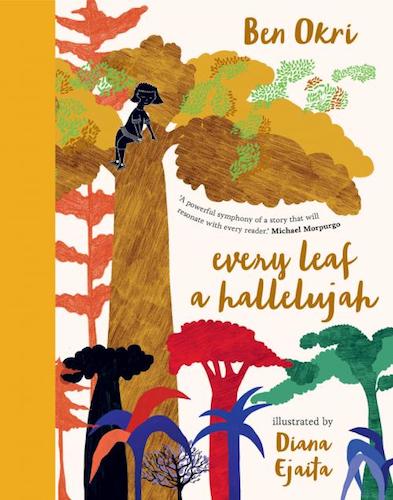 The following is excerpted from Ben Okri's new children's book, Every Leaf a Hallelujah, illustrated by Diana Ejaita. Okri is a poet, novelist, essayist, short-story writer, anthologist, aphorist, playwright, and a recipient of the Booker Prize for Fiction. Ejaita works as an illustrator and textile designer in Berlin. Born in Cremona, Italy, and of Nigerian origins, her aesthetic pays homage to her lineage.

One day a little girl called Mangoshi went into the forest on an errand and got lost. As she tried to make her way back home she found herself among strange-looking trees. Something about the trees worried her at first. They seemed to be whispering. She was not sure where the sound was coming from. It sounded like a river nearby, like the murmur of insects, but no insects ever sounded like this. It came from high up among the treetops and low down among the lower branches. Then sometimes it sounded among the roots. She pressed her ear to the earth and thought she heard the roots whispering. All this puzzled her. She had to get back soon, for it was getting dark. Her parents would start to worry about her.

She had been sent on an errand into the forest to pluck a special flower that grows on the oldest tree. The flower was meant to help heal her mother’s illness. The journey had been simple. She had found the flower, but on the way back the paths had seemed to multiply and become confusing. Mangoshi did not know which one to take because a strange mist obscured the familiar path. Then it was as if the forest itself was trying to confuse her, for every path she took led her deeper into the forest where she saw trees she had never seen before.

They were majestic trees, tall and vast. They looked hundreds of years old. It occurred to her that there was something sad about the trees. At the same moment she felt the sadness Mangoshi began to heart murmurs. The mist that obscured the paths settled on her, preventing her from seeing anything.

While she wandered about in the new darkness her outstretched arms came to rest on the trunk of a tree. She stopped and sat down, too tired to go any further. She rested her back on the tree and fell into a light slumber.

She hadn’t been asleep long when the murmurs she had been hearing became voices. There were deep old voices, and strong voices, and small lovely ones. They were all talking at the same time, surprised that they had at last found someone who could hear them.

“You are all talking at once,” Mangoshi said, “and I can’t understand you.”

The voices fell silent. Perhaps they had never heard a human voice address them before.

“Let the eldest among you speak first,” Mangoshi said, “and then I want to hear whateach of you has to say.”

“Why don’t you speak? You were all speaking at once a moment ago.”

Still they were silent. Their silence was very strange to Mangoshi, stranger than their speaking all at once. Then she realized, after a while, that there was a reason for their silence.

They wanted her to be aware of what they were doing. Moments later, when she noticed what it was, it almost frightened her.

The trees had moved closer. They had clustered round her.

The gigantic obeches and mahoganies leant over the others, so that their tops looked down at the girl as if with faces and eyes. It seemed as if the whole forest had gathered round her, in a dense circle, like elders at a tribal meeting. She became aware of so many personalities: stern old irokos that never laughed, solid obeches with their proverbial air, bright young flame trees with lively senses of humor, growing jacarandas with chattering branches, very ancient baobabs that were economical in their movements and seemed to pour out wisdom. There were trees that liked talking and ones that had the gift of listening. They all crowded round her and were fascinated by her presence among them. But for a long time they did not say anything.

Then at last one of them, a lively young jacaranda, very sensitive and curious, said:

“We should ask her.”

“Not yet,” replied another tree.

“It would be asking too much of her,” said a fourth.

“All the better,” said a sixth, a deep-voiced obeche. “It is the young who can understand.”

“I think we should wait,” said a seventh tree, who sounded very old and wise. “Let’s wait and see what she’s made of. It has to be the right person. It will be wasted if she’s not the right person.”

“She is the right person. See how she looks at us,” said one who had spoken before.

“I think you’re right. She can hear us, can understand us. That’s already a lot.”

This older, wiser voice seemed to decide for the rest of them. They fell silent, but still crowding round her and looking at her with wonder. She looked back at them and they seemed to her like people she knew, people from the village, people she had heard about. She was not sure why she had this feeling. They continued in their silence.

At last she said:

“What is it you’re waiting for?”

The trees said nothing.

“Why am I not ready? Ready for what?”

“I can’t stay here forever. I’ve got to go home. My parents will be thinking something has happened to me by now.”

She began to get up and the trees returned, with a swishing sound, to their original positions. They were no longer bent over her. They no longer seemed like people that she knew. They now seemed only like trees.

“Maybe it was a dream. Maybe I only imagined them talking. How silly of me,” Mangoshi said aloud to herself.

Then she looked for the way back home. The path became clear and she followed it through the forest, listening to the sound of the birds and the murmur of leaves when the wind rushed past. At last she saw the rooftops of the village. She saw people talking and heard the noises of people in their kitchens preparing dinner. The fragrance of the stews made her hurry a little. Darkness had come over the forest. If she had stayed in there a moment longer she might not have found her way home.

Her parents had been worried about her and they were relieved to see her. It was only when they asked her about the flower she was sent to pick, that she realized she didn’t have it. She must have lost it somewhere in the mist. Her parents were sad she had lost it, but were happier to have their daughter back home safe and well. She ate her dinner and listened to a story her mother told her. It was the story of a hunter’s strange experience in the forest. The story was so fascinating that she fell into the story and found herself talking with the hunter and wandering about in the forest. Then she was in bed. Before she fell asleep she remembered what the trees had said about her not being ready. She thought about it a lot before she drifted off.

Excerpted from Every Leaf a Hallelujah by Ben Okri, illustrated by Diane Ejaita. Forthcoming from Other Press. 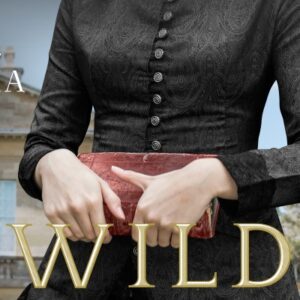 Wild Swan by Patti Callahan, Read by Cynthia Erivo Every Monday through Friday, AudioFile’s editors recommend the best in audiobook listening. We keep our daily episodes...
© LitHub
Back to top