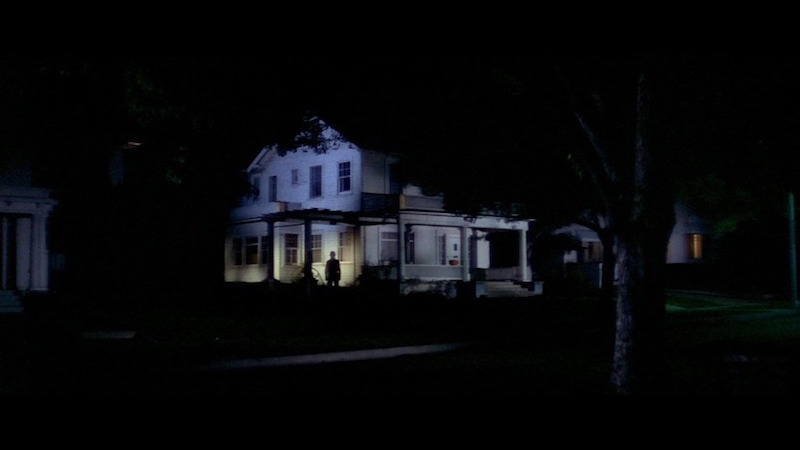 Every House is a Haunted House

Why is So Much of Horror About the Home?

The closing shots of John Carpenter’s original Halloween may be the most horrifying in all of cinema. In them, no murder takes place; we see no bodies, no blood: just houses. These images of deserted suburban residences in the night, with the silhouettes and shadows of leaves dancing on their whitened outer walls, commingle with the sound of deep breathing (presumably the foreboding respiration of the escaped Michael Myers, acknowledged in the credits as merely “The Shape”). These final shots—more terrifying even than Myers’ bleached William Shatner mask, in part because the whitened walls and blackened windows reproduce the horror of the mask in the everyday—disorient all we think we know of the suburbs and force us to confront the false sense of security we feel indoors.

The house has long been associated with horror wherever it exists (in urban, suburban, or rural areas). There are, of course, the classic horror tropes of the haunted house and the cabin in the woods. The house is the body on which the horror film is largely writ. But why? Why do most of the great horror films obsess over the physical structure that we, in our attempts at self-assurance and safekeeping, call a “home”?

The answer may lie in Martin Heidegger’s Letter on Humanism, where the philosopher states, “Language is the House of Being. In its home human beings dwell.” What these horror films do is literalize the Heideggerian metaphor, where the house as language becomes ideology—that which we dwell in, that which we cling to, that which gives us shelter, that which we use to define ourselves, and that which, ultimately, we cannot escape.

When the first cavedwellers left the caves and erected their initial edifice, they were in search of a new and better home, and what they built was a house. That house presumably had a foundation, a structure, walls, a roof, and thus, in fulfilling its core purpose, acted as a barrier, offering protection from the outside world—from the elements, from predators, and from horrors both physical and metaphysical, natural and supernatural.

But the home is more than the structure of the house, it is also the comfort it provides, the sense of belonging it engenders. The home is our private place, the nook where we hoard the detritus of our lives, the museum that houses our menageries and our memories, the body we choose to build outside of the body we’re given. As Gaston Bachelard writes in The Poetics of Space, “Our house is our corner of the world . . . it is our first universe, a real cosmos in every sense of the word.” A home is where we dwell, not just where we live.

Though one might assume that building comes before and, therefore, allows the act of dwelling, in the Heideggerian sense, dwelling is actually fundamental for building, it is always-already-there. In “Building, Dwelling, Thinking,” Heidegger explains, “To dwell, to be set at peace, means to remain at peace within the free sphere that safeguards each thing in its nature. The fundamental character of dwelling is this sparing and preserving.” Dwelling is predicated upon sparing and preserving things as they are and as they are becoming. He proclaims, “Only if we are capable of dwelling, only then can we build.”

So what then do we build for dwelling? What is this house-shaped cosmos we call “home”? Is it, as the cliche assures us, the place “where the heart is”? Is it the site of our sleeping? Is it the space where we store our stuff? Is it the location in which we feel most safe? Is it a residence with rooms, and walls, and doors, and . . . windows?

Windows, perhaps the most chilling features of a house, are the planes through which we are seized by the uncanny. They are places of intrusion. Yes, they allow the dweller within the house to peer out, but never forget that they also allow those outside the house to peer in. The most horrifying moment is not the moment when the murderer stands over you with knife in hand about to snuff you out; it’s the moment when you notice him lurking outdoors, peering into your private place, knowing you’re being watched, stalked, hunted.

It must be noted that “eyes are the windows to the soul” not because eyes are the place where the soul peers out to the other, but because they’re the place where the other peers into the soul. Windows allow the outside world a glimpse of the inside, those beyond the house to view the home. For the home is as much the clutter within as it is the walls and the roof. The home is the leftover Chinese food in the refrigerator, the slept-in sheets on the California King bed, the teddybear snuggled between the matching decorative pillows, the work half-finished at the desk, the wineglasses left in the sink with purplish-brown rings, the hairpins huddled together on the nightstand.

The horror genre itself is a home, of sorts, too—with its comforting cliches, its common structures, and its seeming safety (after all, it is rare, though not impossible, for the horror onscreen to be mirrored in the theater itself). As Scream’s heroine Sidney Prescott says of scary movies, “What’s the point? They’re all the same.” And she’s not entirely off-base. While horror films can look and act differently, just like houses, they do seem to serve common tropological purposes, housing similar horrors.

The genre exists in a continuum of metaphorical language, where not just endings (the virginal girl lives, the horror is held at bay but still exists to haunt the franchise at a later date . . . ) and images (house, mask, knife, noose . . . ) recur, but even things as seemingly unique as names tend to circle back unexpectedly, re-fed through the projector. Dr. Samuel Loomis, the psychiatrist who watches Michael Myers grow from boy to man (or, as Loomis sees it, from boy-sized force of evil to man-sized force of evil) borrows his name from the lover of Marion Crane, the shower victim of Norman Bates in Psycho—another film where houses and bodies are more haunting than homey, traps and tombs instead of sanctuaries and citadels.

Dr. Loomis says of Myers, “I watched him for 15 years, sitting in a room, staring at a wall, not seeing the wall, looking past the wall.” In horror films, evil sees through walls as though they were windows. It stalks its prey regardless of interrupting obstructions. As is said of the “it” in It Follows, “Wherever you are, it’s somewhere walking straight for you.” You can put distance and people between you and it, but it keeps following. This is true of all the most terrifying forces of evil in horror.

These forces, these followers, they want you to stop running, to be lulled by the imagined safety edifice erects. They fear not the house which the victim calls a home. If anything, this supposed safe space, this comforting home, becomes the killer’s playground, his mousetrap. As Sigmund Freud knew, we are not even masters in our own houses. But our confused sense of security in the home is more enticing than the cheese to the mouse and, as deadly temptation, has a higher kill rate.

Sometimes in horror films, there are motives given to the killers: revenge or fame, anger or jealousy, money or madness, hunger or sexual desire. But the best slashers and monsters on the silver screen remain mysterious, they come after us for reasons we can’t recognize, reasons it seems they might not recognize themselves. Myers, as the ultimate abjection, needs no other motives. He’s the blank canvas which Norman Rockwell painted over. As director John Carpenter explains of his creation, “Michael Myers was an absence of character.” He erupts from the Rockwell painting with no other purpose than reminding us that he’s always been lurking beneath the surface, that in fact the surface is as predicated on his existence as it is its covering up.

The opening scene of the original Halloween shows six-year-old Myers committing what is presumably his first murder. The victim, his sister, has just had sex with her boyfriend—which one might abstract into a web of assumptions regarding his motivations, but this would be a mistake, for the film gives us no motive for Myers. Motivations aren’t superimposed onto the character until the sequels, which is why the original has always remained superior to the films that followed.

In The Strangers, one of Halloween’s latter day descendants, the victims ask the three killers their motive. One answers, “Because you were home.” The home, therefore, brings the danger as much as it insulates us from it.

While it is generally true what Bachelard claims—namely, that “the house shelters daydreaming, the house protects the dreamer, the house allows one to dream in peace”—the fact that we believe this wholly, that we allow the house to become a sanctuary in our minds, that we let down our guard in the home, is not only what can turn those dreams into nightmares, but worse, it is what can wake us from our dreams into the worst form of nightmare: a living horror.

Likewise, language and ideology, the warp and woof of being, are not only the structure and safety offered by the home but the walls which trap us too. The language that gives us a way to vocalize our being is also the tool that confines us in itself, that disallows any transcendent understanding of being, that confronts us with the horror of its own lack—the real horror that underpins all art.

Scream’s Sidney Prescott argues that scary movies always have “some stupid killer stalking some big-breasted girl who can’t act who is always running up the stairs when she should be running out the front door.” Countless horror filmgoers have sung the same refrain: “Why do the characters always stay in the house or run back into the house once they’ve exited?” What is this magnetic attraction to a structure that they already know is compromised? It might be that the house—as language, as ideology—is the only place we can run to. It’s all we have to protect us, even when it fails at providing protection.

If language is the house of being, then along with acting as the place where an inhabitant dreams during restful nights of sleep, as the magnet which attracts a victim in distress, and as the site where a murderer traps his prey in a closet, it is also the space for the suicide who writes his final goodbyes, stands up on a chair, slips his head through a noose, and kicks out the chair from under him.

That empty chair is all we leave behind, the material that outlasts our ideology and our identity, our belief and our being. It turns out that what we thought was home—the chair, the bedsheets, the hairpins—is actually nothing more than the collected debris within the house. As Dionne Warwick sublimely sings in that classic Bacharach-David hit: “A chair is still a chair / Even when there’s no one sittin’ there / But a chair is not a house / And a house is not a home.”

"A Natural History of Autumn" 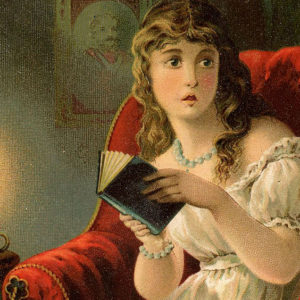 “What the ghost really needs,” Edith Wharton wrote in the preface to her collection of ghost stories, “is not echoing...
© LitHub
Back to top