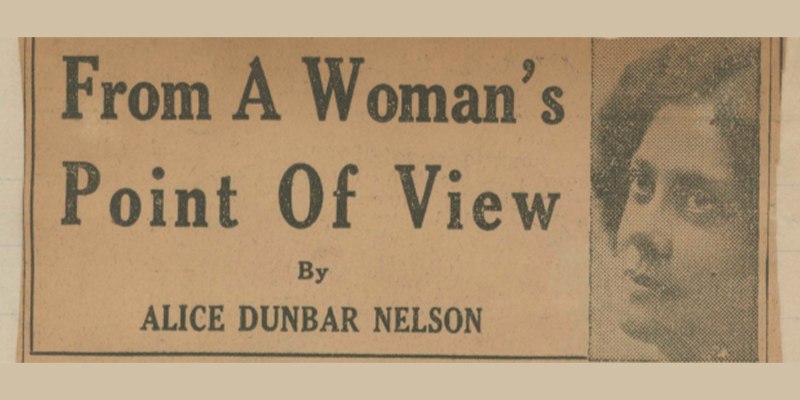 Evergreen words to live by, from Alice Dunbar Nelson.

Alice Dunbar Nelson was a poet, journalist, and activist. She also wrote plays, short stories, and edited a few anthologies. She was a major figure in the Harlem Renaissance, and quite frankly, we don’t talk about her enough. In the 1920s and 1930s, she had her own columns at various local newspapers, including The Pittsburgh Courier and the Washington Eagle. Lucky for us, her column “Une Femme Dit: Crisp, Bright Opinions of Current Happenings from a Woman’s Point of View” has been well-archived, and because today is her birthday, we’re going on a deep dive.

On unpleasantness (or, a reason to get off Twitter):

The quality of being able to ignore that which is not agreeable, or that which interferes with whatever preconceived plan is in our minds, either a thesis to be established or a point to be made, is a wonderful accomplishment. And lest the intricate involvement of the preceding sentence be too Hergesheimer-ish for the lay reader, let us say that it is a good thing to know how to ignore unpleasant truths.

On the secret to giving speeches:

If you want to be a wonderful orator, there are your two speeches. Mix them with some poetry, tear a few stars from the universe, and throw in a moon or a sun, spread plentiful allusions to the Deity throughout—be sure you pronounce “God” in two syllables, with a rising inflection, learn a funny story or two, with a wise crack at the local situation, decry modernity and improvements with one breath, while you howl for progress with the other. Don’t forget the old slave grand-mother, and the washerwoman of the past generation. Hang a few Croix de Guerres around, and be sure that the old flag never touches the ground. If the occasion and the audience is big enough, you may combine the two formulas, and you will have a sure fire howler, that will send your audience rocking into cheers. Try it sometime. Nothing is easier.

“Moron” is doomed. For a while it was quite a fashionable word. When the pseudo-psychologists of the Sunday supplements found something out about it, they worked it overtime. Then the paragraphers and columnists got it, and finally the youngest cub reporter was careful to have all the little crimes that he chronicled committed by morons. A moron might be anything from an idiot to a Master of a Criminal Band. Few knew the definition, less than few used it right, and none cared. It was a nice, comfortable blanket word, and covered all sorts of mental, vocabulary, and psychological lapses on the parts of its myriad users.

On white institutions misrepresenting the facts:

The extent to which Negro news is more or less a closed book to the mass of white newspapers is evidenced by a recent editorial in the New York Times. It congratulated Bishop Gregg upon being elevated to the presidency of Howard University, and commended the school for its bold stand in placing a black man at the helm. The intent was fine, but the editorial appeared two weeks after Bishop Gregg had declined the presidency, and five days after Dr. Johnson had accepted. One or two small town Caucasian papers took the cue and still several more days later editorialized in the same vein and with the same lack of accurate information. Which bears out yet again the contention of this column—that we’re not getting it across to the pale-faced brethren.

On throwing a unique wedding:

France and America like to lead in odd fads, and rather pride themselves on so doing. But it has remained for England to inaugurate the fashion of a pet dog as an accessory to a bride’s costume. The girl who carried her pet terrier to the altar on her wedding day had the courage of her convictions. Some brides carry prayer books. Some carry bouquets, shower variety or quaint cluster kind. Barbara Hill carried her dog. When the serious part of the ceremony came, she handed the animal to her maid of honor, then when it was all over, took doggie back down the aisle with her.

On graduation ceremonies and hope:

It is an arduous task, this, that the cynical old world addresses itself to each spring—that of setting the feet of millions of eager young hopefuls into the path of what they call with bated breath—the owners of the feet do the calling, not the feet—what they call with bated breath LIFE. An arduous task and one accompanied with much witticism, stale puns, jokes, sneers, lifting of eyebrows, sob-stuff, slopping over, and what not on the part of the same cynical old world … we people have not yet adopted that air of cynical, blase worldliness when we talk of the graduating of our own youths and maidens. To us, even after fifty years’ experience of it, the annual hegira from the upper classes of the schools of our own young people, is an event fraught with wonder, adventure, marvel, and vicarious delight. The spectacle of our own youths standing capped and gowned, receiving mystical parchments at the hands of grave dignitaries has for us a never-failing marvel. We cannot be cynical, we are too much awed. To us it is the vision of a great future, the hope of a frustrated people, the laying the burden of our woes and aspirations on the shoulders of those who will carry on; the handing on the torch to be borne higher up the mountain peak of our racial ambition. The whole race rises, as it were, and lays the accolade on each individual youth who receives his diploma … When a people begin to look upon their young folks with cynicism; to be distrustful of their ambitions; to carp at the white flame of their aspirations—that race has already implanted within itself the germs of decay.

On limited opportunities for the next generation (in response to a classified ad by a young white woman lamenting her lack of career options):

College training, sterling worth, absolute sincerity, finest references, ambition, youth and yet not inexperience, and no opening. A whole volume of discouragement and baffled ambition, heartache, thwarted purpose, temptation to lower the banner of self-respect … And does it not sound like the epitome of thousands of boys and girls, men and women of our own race? To bridge the apparently yawning chasm which lies between those who have something, and those who want that something, is ofttimes a Herculanean task. In the case of this girl who had failed to find the world her oyster, perhaps the arresting advertisement in the newspaper will suffice. But who shall bridge the gap for the 1,300 young college graduates of color who received their degrees last June?

According to Kaitlyn Greenidge, Alice Dunbar Nelson was also “messy as fuck.” Consider this an invitation to check out her diaries, too.