Even My Imaginary Male Muses
Don’t Measure Up

Jen Mediano Can't Help But Be a Little Disappointed

I think about Robert Graves as I shiver in my spare room, shopping online for quilted vests and space heaters. Graves contended that the female artist is her own muse. By that he meant the idea of a woman artist was absurd, as was the idea of a woman finding creative inspiration in a man or men. My physical surroundings would bear this out: I am not an artist. There are no muses for me at five in the morning. Muses seem like they’d get up at noon. I do one of those (now discredited) power poses that I heard about in a TED talk. I see my breath as I summon a muse. A dude, I specify to whoever supplies muses. I’ll take whatever dude is available. I entreat him to assist me with what I’ve only recently had the balls to call art, this thing that pecks at my time and my brain. And then I wait. I sit back in the chair and feel the cold seep in to my organs one by one.

I work in a sunless gray cubicle at a job that is the best thing that has ever happened to me. I have obligations: marriage, mortgage, kids, car payments. But I’ve been blessed and cursed with creative impulses. Ideas. When I spend time with these ideas, they convince me to spend more and more time with them; they’re demanding. Like eczema: it makes you scratch and scratch, and the more you scratch the more you, until you hit bone, and that won’t stop you from scratching, either.

When I’m not scratching, I read posts or articles by actual writers about when, where, and the amount of time they spend writing. Three pages. Four hours. A thousand words a day. Morning writing. Dawn writing. Middle-of-the-night-writing. Write three hours a day minimum to get to your wildness, one advises. I can only speak for myself but I have enough wildness. I need to tamp down that wildness or I can’t get on with my day. I can’t sit down with this shit at my leisure. I write while the coffee’s brewing, writing longhand while trying to ignore my phone, or before the kids wake up. This is what got me thinking about muses. I need someone to guide me through this . . . So I visualized and meditated until my muse was born.

I’m still me, dirtying up art with my life.

The first time I called upon a muse, he took the form of a straggly-haired unshaven guy wearing plaid pajama pants and a hoodie. I found him kind of attractive. He sat in a fake plastic Adirondack chair in my backyard, smoking Marlboro reds and drinking coffee out of one of my green Fiestaware cups. He saw me and raised his (my) coffee cup in greeting. I saw another one of my coffee cups by his (bare, somewhat gnarled) foot. It was filled with cigarette butts. No coffee for me, just for him. Thanks, asshole.

Another time I called upon the muse, I had a dream of him drinking beer and shooting the shit with the late rebel priest Dan Berrigan on the balcony of a rented condo in Bethany Beach, Delaware. They were heavy in conversation, waving their arms around and everything. I inched toward them to hear what they were saying. Imagine the material I could get out of this! But those dicks ignored me and kept backing away when I tried to break into the conversation. They didn’t even offer me a beer. I woke up angry, turned on the space heater, and wrote it down.

A third time I called upon a muse he took the form of post-Colbert Report, pre-Late Show, Jesuit-missionary-from-the-1600s-looking Stephen Colbert. I came downstairs to find him sitting at my kitchen table. He looked at me with disgust, his arms folded with a stack of papers—my manuscript!—at his elbow, a sharpened pencil and two red ballpoint Papermate pens, capped, flanking the pencil. He, too, was drinking my coffee.

“Let’s get this party started,” he said, and started furiously editing my manuscript, marking the pages completely in red and throwing them on the floor as he finished.

I never called upon that particular muse again.

I realize that I’m doing the creative equivalent of taking my muse to McDonald’s and then the backseat of my car for a night out.

I wonder what the point is of having dreams and visions they don’t play out the way you want them to: ending in creative triumph, lustful conquest or both. I could only imagine what Graves got up to with his muses, and I decided that I should follow in this tradition. But my fantasies take these humiliating detours. One time after an attempted seduction my muse pushed me off my own bed and resumed lounging and looking at his phone. Who dreams about rejection? I do.

There were other visions of my muse sitting by a bonfire in a cave, very Platonic. Then he got up, walked over to the cave wall, and began to urinate. I recognized the blanket around his shoulders. That’s mine, I thought, watching its edges drag through sand and piss. I yelled at him: put that in the laundry basket before you disappear into another dimension! There was another vision of him seated at my late grandma’s dining room table in her house in Upper Darby, PA. In this vision, the muse, my grandmother and aunt all eat fried chicken and fling the bones into the cardboard KFC tub it came in, drink Tab, and smoke unapologetically because it’s the 1970s. Seeing them laugh and have fun infuriates me. Does anyone offer me Tab or a drumstick? No.

One time he led me down a mineshaft and left me there. Another time he dug up a boxwood hedge in the yard of my childhood home, then continued to dig until it became a tunnel that led to the unheated room in my house where I sit now, typing and scratching my cold, stiff hands. That was the only dream where he actually did something besides eat, drink, smoke, or look at his phone.

I try. I try to summon some kind of inspiration that I think a real artist would have, but I’m still me, dirtying up art with my life. But I guess my muse is working for me. He’s a self-starter. Shows up to work when summoned. Doesn’t seem to mind that I can’t pay that much attention to him. Doesn’t complain about working conditions. I don’t have a seaside cottage or a book-lined office or some other pleasant environment in which he may recline, no plinth whereupon he may rest and receive my worship. I realize that I’m doing the creative equivalent of taking my muse to McDonald’s and then the backseat of my car for a night out, so I can’t be that surprised by his half-assedness.

But it does the trick. I get in my words, which turn into pages and chapters. Bit by bit, time hoarded before the sun comes up, or in the dentist’s waiting room or scribbled in the margins of my PowerPoint slides to transcribe later. Always later. I tease out inspiration driving home from work on deer-splattered country roads. I think about plot points or a character’s relationship with his father during the harrowing sprint across a three-lane highway to get my lunch. This is how I rip out time from a life that claims every second. Time that I stack up and save, hoping I won’t get caught. Stealing time from sleep, from time I’m supposed to spend bettering myself—to be a better mother, more attractive female, more devoted wife, harder worker, better informed citizen—in countless other ways. My muse gets these scrapings; that’s all I’ve got to give him. If he won’t shave for me or can’t be bothered to wear something decent, I can’t really hold it against him.

Jen Mediano’s work has appeared in Sand Hills Literary Magazine, Tupelo Quarterly, the Inquisitive Eater, and Public Seminar. She’s the host and creator of the Swears & Prayers podcast. Find her at themediano.com

In the Aftermath of Civil War, a Writing Workshop Aims for Peace

Finding a Spiritual Home in the Weirdness of My Polish Heritage 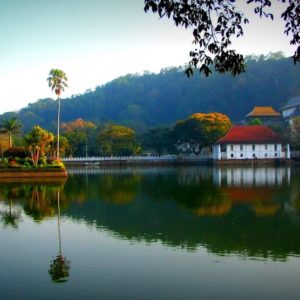 In the Aftermath of Civil War, a Writing Workshop Aims for Peace

This story was reported with support from the Pulitzer Center on Crisis Reporting. * One day near the end of the Sri Lankan...
© LitHub
Back to top